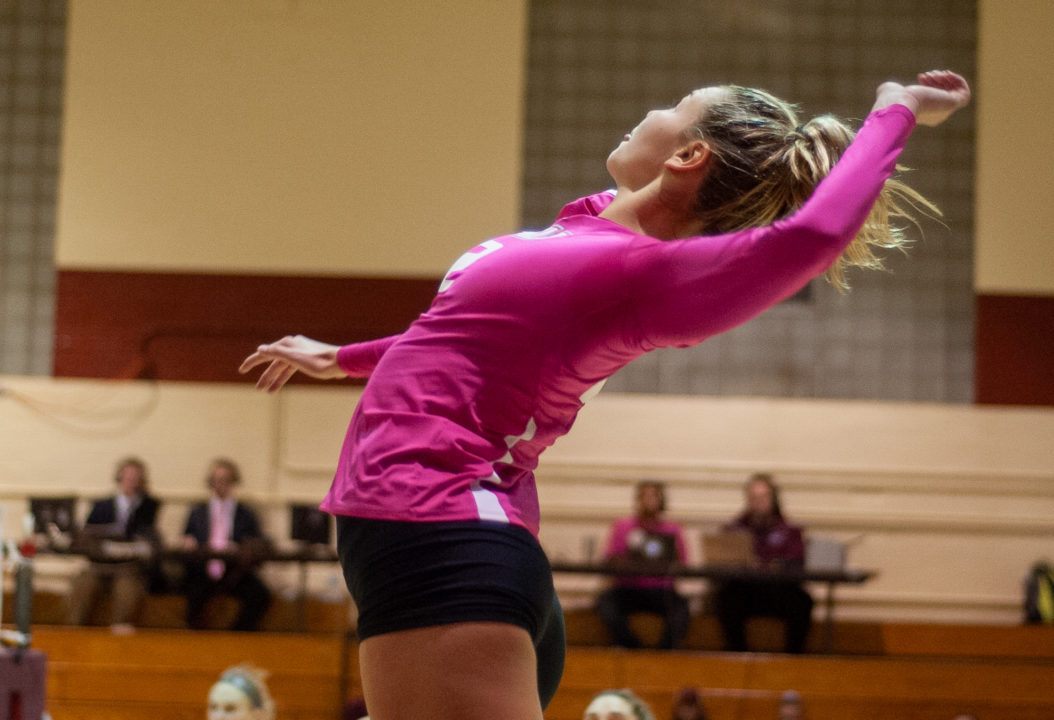 Sophomore outside hitter Maggie Nedoma, the kills leader at Southern Illinois University, will transfer, coach Kari Thompson said in a pre-match interview with the Saluki Radio Network on Saturday before the team lost 3-1 to Missouri State. Thompson says that Nedoma has entered her name into the new NCAA database where athletes can notify other coaches of intent to transfer. She notified the team of her decision and by rule had 2 days to enter the database.

“We’re going to let her do that, but we’re going to focus on our team and move forward with our team,” Thompson said. “It’s a new thing. You see teams across the country are dealing with it in different ways. I think Maggie’s focusing on her future, and we’re focusing on us and the players we have right now that want to be a part of our program going forward.

“A lot of (the players) were really surprised. I mean, I was surprised as well, the timing with it and everything like that,” Thompson continued. “But we’ve faced a lot of adversity so far this season and I think right now, it’s just another bump that we have to overcome and go forward.

“I don’t think anyone’s actually down about it, it’s kind of ‘alright, this is who we are, we’re going to still compete and work hard and we’re going to focus on us right now and who’s here and that’s that.”

While Nedoma’s absence hasn’t really changed Brown’s level of participation in the offense, it has led to an increase in opportunities for 6’2″ junior opposite Emma Baalman who has moved to the right side and averaged 1.9 kills/set on 6.2 swings/set since Nedoma left the team. In the team’s first 21 games of the season, she was averaging 1.03 kills and 3.04 attacks per set.

In the interim, Thompson has made several shifts to her lineup in an attempt to jumpstart the 4-20 team. Backup setter Rachel Maguire had been receiving the lion’s share of the swings not going to Nedoma, but after hitting -.027 in 37 attempts against Illinois State (the team’s first match without Nedoma), those opportunities have shifted to Kat Wagner, who has 15 kills and 66 swings in the team’s last 10 sets.

The team has played without Alysa Sutton since September – who was their #2 option for most of non-conference play – and Thompson says she’s working on some things ‘off the court’ in the interest of team culture, while 6’2″ sophomore outside hitter Hannah Becker will redshirt the season.

“Lindsay has been doing a great job, coming on more-and-more in the middle since she’s been full strength,” Thompson said with a hint of foreshadowing before the match. Thompson also emphasized that the team needed to find other ways to score points, putting the onus on the team’s defense, and especially their block, to improve.

The team has 7 regular-season matches remaining and are currently 0-11 in the Missouri Valley. The team finished 6-23 last season, which was the 2nd-lowest win total and winning percentage in program history (behind only a 5-21 season in 1999). The top 6 teams in the conference advance to the conference championship tournament.