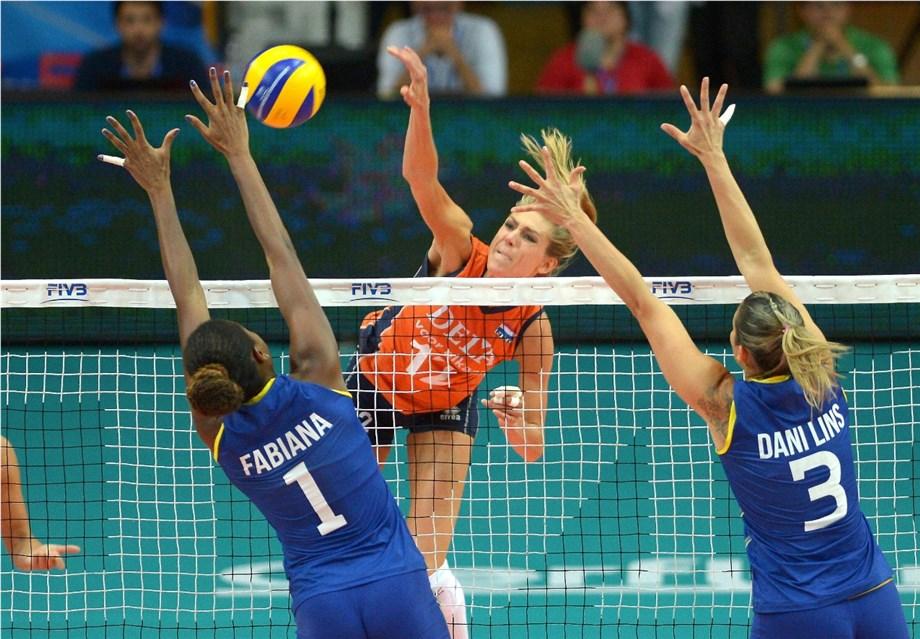 Manon Flier, holder of 430 international caps with the Dutch indoor team, is making the move to the beach. Archive Photo via FIVB

With the growing popularity, and profitability, of beach volleyball world wide, more-and-more indoor players are making the switch to the sand in their 30s when their knees and vertical leaps begin to give out. The latest star from the court to make the jump is 32-year old Dutch player Manon Nummerdor-Flier, who as of January 1, 2017 will partner with two-time beach Olympian Marleen van Iersel.

By the time last year’s European Championships came around, however, Flier’s role with the team had diminished. In the gold medal game, she played in just 2 sets and scored only a single point.

“The original goal was to get back to playing at a club abroad,” Flier said of the decision-making process. “Recently I was approached by Marleen, who asked if I would like to form a beach volleyball team with her. I have carefully considered the offer and given a resounding yes after some thinking time. I consider it a luxury that I find myself in such a strong program, and that I can play with someone as experienced as Marleen. I still have a long way to go, but it’s a dream to qualify for the European Championship in Beach Volleyball to play at home. ”

The Netherlands’ beach program has improved greatly over the last two Olympic cycles. Whereas previously, they were also-rans lucky to qualify a team on the beach, four years ago they brought in Victor Anfiloff to run their beach program, and it paid huge dividends. The Dutch won their first medal on the beach in Rio, a bronze from their men’s pair of Brouwer/Meeuwsen, and as a nation ranked 7th with 6 medals at last season’s FIVB World Tour.

Van Iersel, a 28-year old residing in Amsterdam, has most recently been playing with Madelein Meppelink. The two, who paired up in 2014, were seeded 6th, and finished 9th, at this summer’s Olympic Games. Together, they raked in over $500,000 (USD) in prize money in 35 events played together.

Meppelink has not yet announced who her new partner will be, but she does plan to continue playing.

In July of 2016, Flier gave birth to her first child with husband Render Nummerdor. The two have been together since 2005, and Nummerdor himself is a Dutch Olympian that has made a similar switch. He was a European Champion with the Dutch indoor team in 1997, and in 2008 won a European title on the beach. 2015 also saw Nummerdor win a Worlds silver medal on the beach with partner Christiaan Varenhorst.