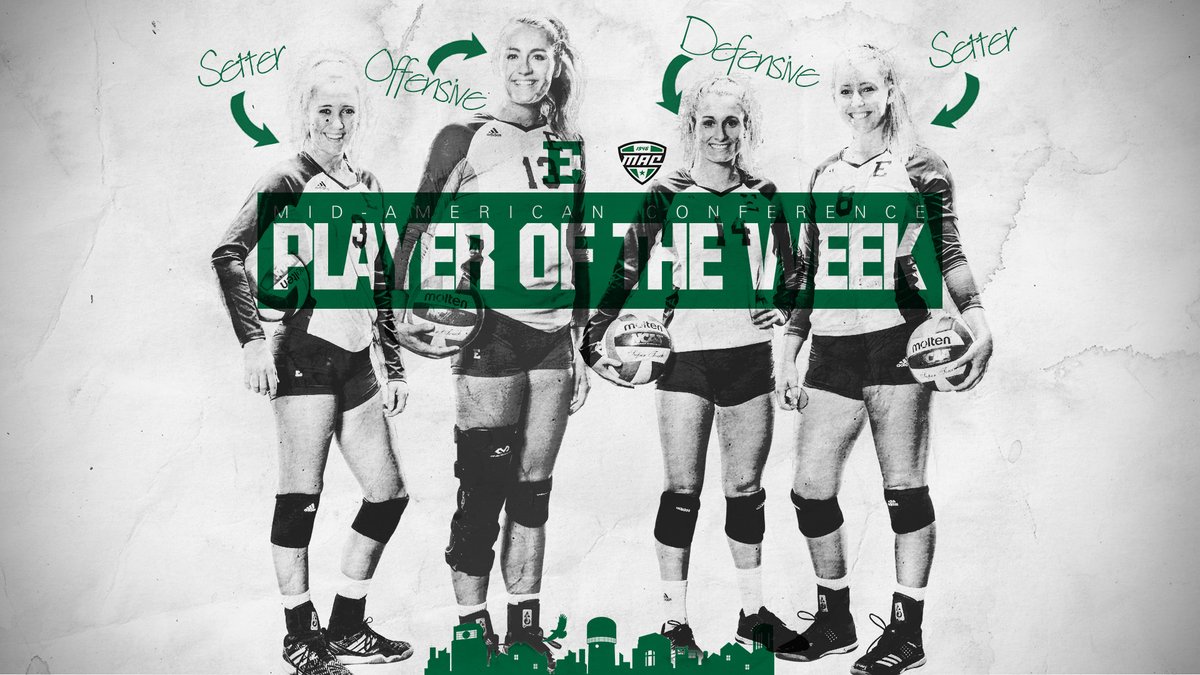 Jaime Kosiorek, Ohio, Outside Hitter
R-Senior – Chagrin Falls, Ohio/Kenton
Kosiorek put together a big weekend for Ohio (9-14, 4-6 MAC), hitting at .419 clip with a team-high 37 kills (4.62 per set). She also ranked second on the team with four service aces (0.50 per set) and 29 digs (3.62 per set). Kosiorek broke the program record for career service aces in the rally scoring era in a 3-0 sweep of Western Michigan last Friday (Oct. 19) at the Convocation Center, recording three to bring her career total to 163. She also led the match with 13 kills and a career-best .619 hitting percentage and achieved a double-double with 13 digs. The following day in a tough five-set loss to Northern Illinois at the Convo, Kosiorek hit .340 with a season-high 24 kills to lead the team and posted another double-double with a season-high 16 digs.

Cassie Haut, Eastern Michigan, Middle Blocker
R-Junior – Monroe, Michigan/St. Mary Catholic Central
Redshirt junior Cassie Haut was a stalwart on the offensive side of the ball for Eastern in its 1-1 weekend, pounding out 30 total kills and hitting a whopping .500 in seven sets. The Monroe, Mich. native had 17 kills while hitting .344 in the weekend’s opener at Buffalo and followed that up with a 13-kill performance while hitting a personal-record .812 for the match. Haut upped her already-MAC-best attack percentage to .384 over the two matches, and now has her points per set mark at 3.84 for the season.

Kristina Nieves, Buffalo, Middle Blocker
Junior – Ringwood, New Jersey/Passaic County Technical Institute
Nieves led the Bulls defensively this past weekend as she averaged 1.75 blocks per set as UB split its two matches. Nieves had a double-double in the win over Eastern Michigan as she finished with 11 kills and 10 blocks, including two solo blocks.  She was strong both defensively and offensively as she added 11 kills, hitting .320 for the match.  On Saturday against Central Michigan, Nieves added four more blocks, while she also finished with six kills and no errors, hitting .500 for the night.  On the season, Nieves is averaging just under 1.00 block per set.

Alyssa LaFace, Eastern Michigan, Libero
Senior – Allen Park, Michigan/Allen Park
Senior Alyssa LaFace had another stellar performance for Eastern Michigan over the weekend, putting up a total of 49 digs in its two games for a 7.00 digs per set mark. The Allen Park, Mich. native did not commit a single error in 32 reception chances, upped her season digs per set total to 6.13, and tallied her sixth 30+ dig game of the season with her 35-dig output against Buffalo.

Alex Haffner, Kent State, Setter
R-Freshman – Lee’s Summit, Montana/Lee’s Summit North
Alex Haffner averaged 11.22 assists per set, 2.00 digs per set and 1.11 points per set to lead a short-handed Kent State team that was without its top two kills per set leaders to a home weekend sweep. Haffner made good decisions throughout the weekend, as the Golden Flashes hit .264 as a team and had four players total 24 or more kills over the two matches. She recorded a career-high 61 assists which is the fourth-most during seventh-year head coach Don Gromala’s tenure and added 12 digs for her 10th double-double of the season in Friday’s 3-2 victory over Northern Illinois. Haffner added 40 assists, six digs and a career-high six kills Saturday in a 3-1 win against Western Michigan.

Mallory Rajewski, Eastern Michigan, Setter (R-Senior – Midland, Michigan/Midland)
Riley Taylor, Eastern Michigan, Setter (Junior – Indianapolis, Indiana/Perry Meridian)
Redshirt senior Mallory Rajewski and junior Riley Taylor orchestrated the Eastern Michigan offense beautifully over the weekend, dolling out a combined 52 assists in the four-set loss at Buffalo, and distributing 36 in the Eagles’ three-set rout of Akron. The two averaged 12.57 assists for the weekend, upping their season average to 12.02, but were also able to contribute on the offense with the attack, finishing with 1.00 kills per set while hitting .429. The pair also provided stout defense, putting up 5.43 digs per set. Overall, the two contributed to a weekend in which the Green and White hit .268 as a whole, including an outstanding .354 output at Akron.