ECU Adds Hudson & Vanderhorst to Give Them 4 Transfers This Offseason 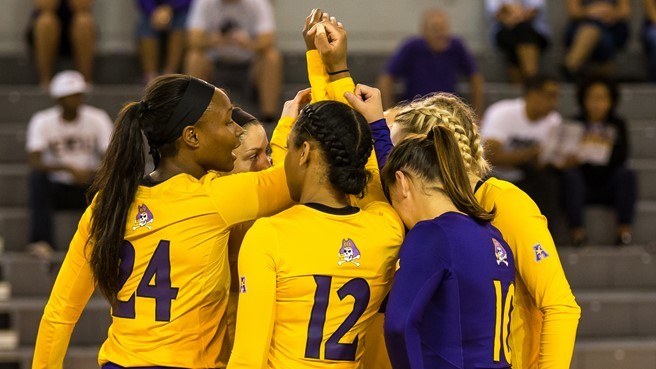 East Carolina is bringing on two more transfers to give them four total incoming for this offseason. Archive Photo via East Carolina Athletics

East Carolina is bringing on two more transfers – giving them four in total this offseason – in defensive specialist/libero Brianna Hudson from UTSA and outside hitter Kalee Vanderhorst from East Tennessee State. Each will be immediately eligible for the fall of 2018, with Hudson owning two years left of play as a junior and Vanderhorst with three years left as a sophomore.

A 5’6″ native of Houston, Texas, Hudson spent her previous two years with UTSA. She immediately earned time as a freshman and appeared in 25 of 28 matches and 71 sets in which she logged 52 digs and seven aces. That time rose in year two as a sophomore, when she again played in 25 matches but this time through 90 sets and recorded 1.28 digs per set with double-digit totals in four matches. Prior to that, at Cypress Lakes High School she was a versatile outside hitter and back row defender with over 1,000 kills and digs.

“Brianna is a great addition to our program,” East Carolina sixth-year head coach Julie Torbett said in the team’s release. “She was a solid player for UTSA and received great coaching there. Defense is such an important part of our program and we expect that Bri will come in and compete for time in the back row.”

The second half of the pair of additions is 5’10” Vanderhorst, who was at East Tennessee State for one season. In her lone year as a true freshman, Vanderhorst appeared in 81 sets across 25 matches for an NCAA Tournament team and netted 1.17 kills per set and 0.54 blocks per set. That included six kills kills on a .455 mark in the SoCon Tournament and six more against Kentucky in the NCAA Tournament first round. The D.H. Conley High School and Broughton High School alumna was also listed on the AVCA Under Armour High School All-American team in 2016.

“I am so happy to have the opportunity to coach Kalee Vanderhorst,” Torbett added in the release. “I have watched her play for years and I know what she is capable of. She was a contributor to ETSU’s championship in the Southern Conference. We are excited she came back home to Greenville. Her parents are both alumni and her father was a standout on our men’s basketball team.”

#PirateNation – Help us officially welcome @_brihudson and @Kayyvan14 to the program! We are so excited to have these talented ladies in Purple and Gold! ☠️💜💛 pic.twitter.com/PFAVx2Iyl2