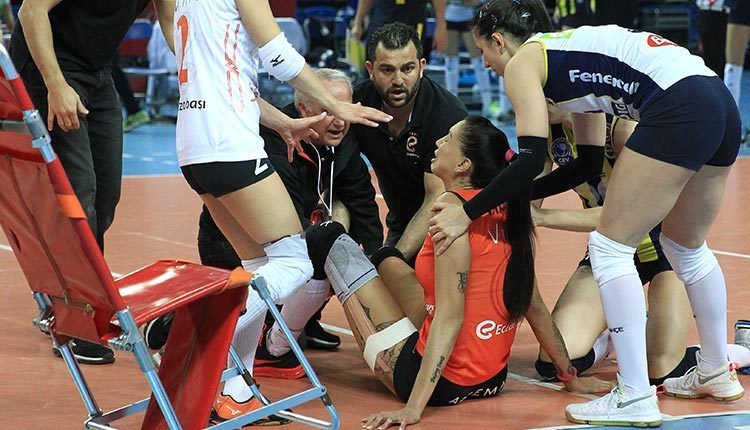 Thaisa Daher will be in a cast for 3 weeks before beginning physical therapy. Archive Photo via Turkish Volleyball

Brazilian volleyball star Thaisa Daher, who is employed by the Turkish club Eczacibasi in Istanbul, won’t require surgery on her injured ankle.

In an update posted on Wednesday, the club says that MRI and CT scans show injury to the ligaments of her ankle and a “very small lesion” on her cartilage.

Daher will spend the next 3 weeks with her ankle in a plaster splint with no weight on it, after which time she will begin physical therapy and a walking boot. The club also says that there’s no indication at this time that the ankle will require surgery.

The 29-year old, who won Olympic gold with Brazil at the 2008 and 2012 Olympic Games and played on the 5th-place team in Rio, took to Instagram over the last 24 hours to thank her fans, friends, and supporters. That included a photo showing her new footwear.

The timeline for her return is not perfectly defined, but will leave her out for at least the remaining Champions League and Turkish League seasons. In the same game where she was injured, her team advanced to play domestic rivals VakifBank Istanbul in the Champions League Final 4 on April 22nd in Italy. Given the severity of the injury, it also rules her out for the Women’s Club World Championship from May 8th-14th in Japan – which is just 31 days away.

Thank you my dear ones who gave me all support these days here in the hospital! Kosha and Fedor who slept with me the first night with all the affection of the world! Ipek you were amazing taken care of with all the attention and love! She spent all his time here supporting me and making me smile! Thank you every team for the support and the loving visits! Thanks girls! Love you! Thank you Clube Eczacibasi for everything, care, attention, support and chocolates 🍫 😋💕flowers 💐hehehehehehhehe 🇺🇸🇺🇸🇺🇸🇺🇸👉🏼👉🏼👉🏼👉🏼👉🏼👉🏼Obrigada meu queridos que me deram todo suporte nesses dias aqui no hospital! Kosha e Fedor que dormiram comigo n primeira noite com todo carinho do mundo! Ipek você foi incrível cuidou com toda atenção e amor! Ficou todo tempo aqui me dando apoio e me fazendo sorrir! Obrigada todo time pelo suporte e pelas visitas carinhosas! Obrigada meninas! Amo vocês! Obrigada Clube Eczacibasi por tudo, carinho, atenção, suporte e chocolates e flores 😋💕🌹hehehehehehhehe 🇧🇷🇧🇷🇧🇷🇧🇷🇧🇷

🇧🇷Obrigada a todos pelo carinho e pelas oracoes! Toda a corrente de oracoes e pensamentos positivos! Obrigada pela preocupacao e pelo amor de voces!!!!! Ja estou melhor e em casa! Agora é agradecer a Deus por tudo e ser paciente para a recuperacao!!!!! Um beijo em cada coracao e muito obrigada meus queridos e amados fas, familia, amigos…Obrigada Clube por tudo que tem feito por mim! Estão sendo extremamente atenciosos e prestativos em tudo! Obrigada Deus por ter vocês me dando suporte!💕💕💕💕. 🇺🇸🇺🇸Thank you all for the love and for the prayers! All the chain of prayers and positive thoughts! Thank you for your concern and for your love !!!!! I'm already better and at home! Now it is to thank God for everything and to be patient for recovery !!!!! A kiss in each heart and thank you my beloved friends, family, friends …Thank you, Clube @eczacibasivitravoleybol , all you have done for me! They are being extremely attentive and helpful in everything! Thank you God for having you supporting me!