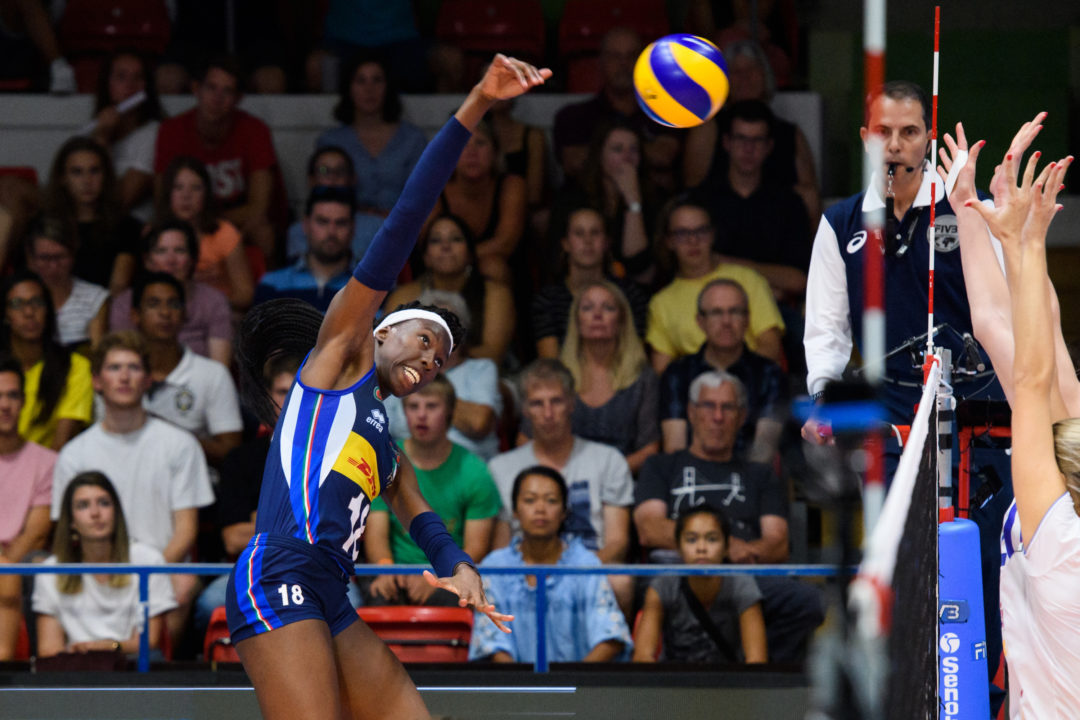 In a matchup between thee two best offensive players of the tournament, Italy’s Paola Egonu out-battled Russia’s Nataliya Goncharova in the 2018 Montreux Masters final both in the match points tally (26 to 18) and on the scoreboard (3-0).

The win gives Italy its 2nd Montreux title and 8th medal in total. Their 2 wins ties Russia, the team they beat, for the 4th-most in the 33-year history of the tournament. Italy’s last title came in 2004, when the tournament was still played in a round robin format, while Russia hasn’t topped the table now since 2002.

1,800 fans packed into the Plage du Pierrier Clarens, which is about 200 more than last year’s final match, as anticipation builds for the World Championships.

In Sunday’s other match, Turkey beat injury-stricken Brazil 3-2, making a 3rd-straight win over Brazil for the Turkish women, dating back to their victory in the Nations League semi-finial earlier this year.

While the set-count was a clean 3-0 sweep, the match was much more competitive than that final score made it sound.

Egonu finished the match with 26 points, including 24 kills on 48 swings (50%). 11 of those points came in the 2nd set, as the score marched all the way to 30-28. In the crunch, Goncharova was very quiet, but the 19-year old Egonu had 3 of Italy’s last 6 points (including a kill off Goncharova’s block) to finish that crucial middle set.

Goncharova wound up with 18 point in the match, including 17 kills on 37 swings (35.1%). Italy’s middle blockers dominated the flow of play with a 15-6 blocks advantage, including 6 by Anna Danesi and another 4 by Cristina Chirichella.

The counter to that, which kept the match competitive, was that Italy had 20 errors, as compared to just 13 for Russia.

For the first time in this tournament, Brazil’s Rosamaria (who finished 3rd in scoring behind Egonu and Goncharova) was out-scored by a Brazilian teammate, with Gabi contributing 13 as compared to Rosamaria’s 11.

Still, that combined total wasn’t enough to overcome the right arm of Hande Baladin on Sunday, as the 20-year old Turk scored 25 points (hitting: 20/45 – 44.4%) to lift Turkey to the bronze medal.

Baladin contributed 4 blocks and an ace to the team’s effort, but the biggest difference in the match was hitting efficiency: Turkey hit 59/131 for a very-high 45% clip as a team. Brazil, missing their top offensive weapon Tandara Caixeta this week, had almost the same number of swings (132), but only 43 kills to go with it, for just a 33% hitting rate.

It was the aggressiveness of Turkey, especially the young Baladin, that paid-off for them in the match. Baladin only had 27 points in the tournament coming into Sunday, and nearly matched that in one game on Sunday.

The match swung in the 5th set where an early Turkish lead turned into a 10-9 advantage for Brazil in the tie-break. Turkish coach Giovanni Guidetti called a timeout and gave his team an emotional pep-talk. Middle blocker and captain Eda Erdem Dundar responded first with two big kills, before Baladin hit the winner, just her 3rd point in the tie-breaker, to seal the match.

Erdem had 18 points in the match, 2nd-most of anyone, including 5 in the shortened 5th frame, as the 31-year old veteran came up big when the team needed its captain the most. She also had 5 blocks in the match and 2 aces: both team highs.