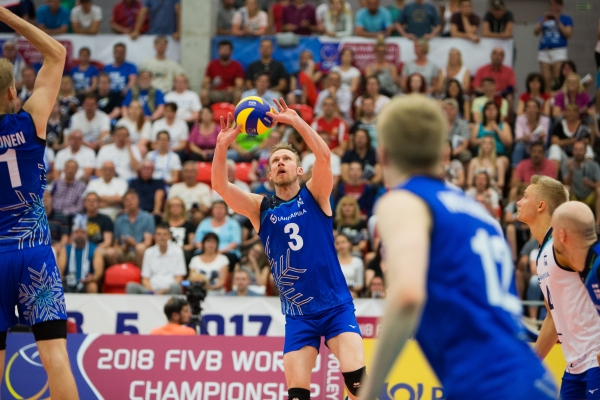 Finland, Europe's top-ranked team in the qualification tournament, got off to a great start on August 18. Current Photo via Finnish Volleyball Association 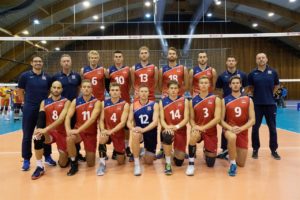 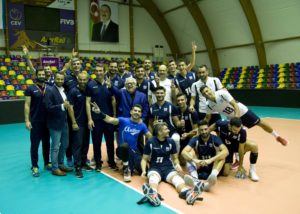 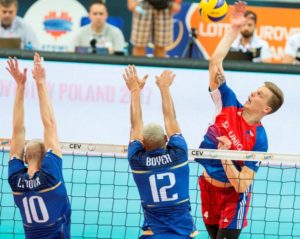 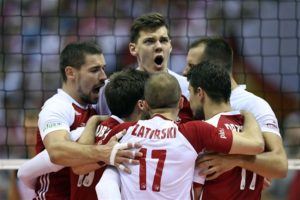 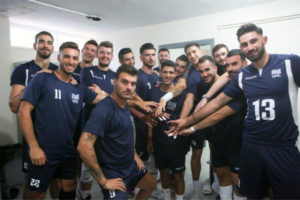 Who will advance and who’ll have to stay home? 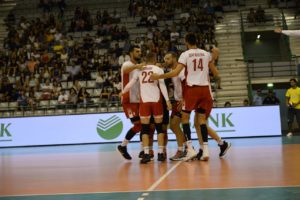 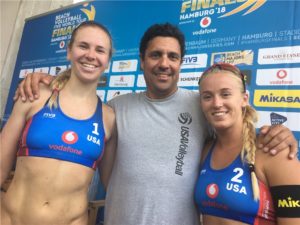 Jose Loiola is the owner of a very successful beach volleyball career that spanned 66 international tournaments, 20 World Tour medals, and an Olympic Games participation in 2000 with legend Emanuel Rego

Finland, the top-ranked team in the qualification tournament got a full 3 points in their 3-1 win over a struggling Denmark. Finland had 4 of their 5 attacking starting reaching double-digit points. Opposite, Urpo Sivula, led Finland with 16 points on 14 kills and 2 aces while hitting .423 (54%).  Finland received 29 points from the outside hitter position. Antti Makinen scored 15 points on 13 kills, 1 block, and 1 ace from the outside while Elviss Krastins scored 14 points on 11 kills, 2 blocks, and an ace.

Henrick Porkka scored 11 points in the middle for Finland. He put away 10 kills on 11 attempts with 1 attack error and added a lock. Their other middle, Sauli Sinkkonen, scored 4 points on 3 kills and a block. Finland’s setter, Mikko Esko, set his team to an impressive .526 hitting percentage (61%) while scoring 7 points from 4 kills, 2 blocks and an ace.

Rasmus Nielsen led Denmark, and the match, with 21 points on 19 kills, 1 block, and 1 ace. Their other outside hitter, Philip Ozari, scored 6 points on 5 kills and a block. Denmark’s opposite, Peter Bonessen, contributed 16 points on 16 kills but only hit .264 (47%) with 7 hitting errors.

Portgual has been strong out of the gate towards qualification for the European Championships. They have 2 wins and have yet to lost a set. On Saturday they were led by Alexandre and Marco Ferreira. Alexandre led all scorers in the match with 16 kills. He had a match-high 11 kills and led the match with 4 service aces.  He chipped in a block as well while hitting .556 with a 61% success rate in attack.  Marco, an opposite, trailed right behind with 11 points on 7 kills, 1 aces, and a match-high 3 blocks.

Portugal got 8 points from their other outside hitter, Lourenco Martins, on 7 kills and 1 block. Martins hit .211 with a 37% attack success rate. They got 5 points from their middle, Filip Cveticanin, on 3 kills and 2 blocks. Their other middle, Felipe Martins produced 3 points on 2 kills and 1 block. While he did not establish the middle in attack, Portugal’s setter, Miguel Tavares Rodrigues, scored 5 points on 3 kills (from 3 attempts) and 2 blocks. He set Portugal to a hitting percentage of 49% (.373)

Croatia’s leading scorer was Leo Andric. The starting opposite scored 14 points on 11 kills, 1 block, and 2 service aces. While he led his team in point production, he also committed the most attack errors (5) and hit .250 (46%). Danijel Galic and Fran Peterlin both scored 5 points from the outside for Croatia. Peterlin scored all of his points in just over 1 set of action. He replaced Filip Sestan in the 2nd set. Sestan only had 3 points up until then and had committed 5 passing errors in serve receive.

Tsimafei Zhukousi set Croatia to a 44% success rate in attack (.203) and got 6 kills from his middles. Ivan Mihalj put away 5 kills on 7 attempts. He also contributed 2 blocks. Sandro Dukic finished with 1 kill on 2 attempts.

Norway got points from 9 different players in a 3-0 rout of Georgia that took only 70 minutes to complete. Mathias Loftesnes led the way for Norway with 14 points on 13 kills and a service ace while hitting an astounding .631 (68%). Bjarne Huus scored 10 points from the other outside hitter position for Norway on 7 kills and a match-high 3 blocks. Kristian Bjelland (3) and Rune Fasteland (7) combined in the middle to contribute 10 points for the victors.

Badri Nutsubidze was the only player for Georgia to score in the double digits. His 10 points came on 9 kills and a block.  Daviti Tskhomaria chipped in 8 points from the left side. Mikheil Guniava contributed 5 points from the outside hitter position but was subbed out in the 2nd set. No other player scored more than 2 points for Georgia as the door to Euro 2019 is slowly closing on them.

Macedonia was just a single set away from being 2-0 in Pool F, but Ukraine stormed back from an 0-2 deficit to win in 5 sets. Ukraine’s coach, Ugis Krastins, replaced a middle blockers, his setter and his opposite in the comeback effort.  It paid off as Dmytro Viietski came in at opposite and scored 14 points in the final 2 sets on 11 kills and 3 aces. Vladyslav Didenko came in to set and won the last 3 sets. This included setting his team to a 72% hitting percentage in the 4th set and a 50% average in the tie-break.

Ukraine was led by Ian Iereshchenko’s 19 points on 17 kills and 2 aces. Their other outside hitter, Olesky Klyamar, tallied 13 points on 10 kills, 2 blocks, and an ace.

Macedonia rode the arm of their opposite, Nikola Gjorgiev. He led the match with 25 points on 23 kills and 2 aces, but he comited 11 errors in attack. Aleksandar Ljaftov contributed 16 points from 13 kills, 2 blocks, and a service ace. Macedonia got a combined 11 points out for their middle blockers, Ivan Andonov (4) and Filip Madjunkov (7).

Nikos Zoupani led a balanced Greek attack from the right side and middle with 14 points. His points from the opposite position came from 11 kills, 2 blocks, and an ace while hitting .409 (50%).  The middle blockers for Greece, Georgios Petreas (13) and Panagiotis Pelekoudas (11) were the only other players to score in the double digits. Petreas posted a match-high 5 blocks.

Greece’s setter, Dmytro Filippov, set his team to an impressive .517 attack average (62%). It was quite impressive that 43% of their kills came through the middle. Greece held a 23% advantage over Sweden in positive passes in serve receive.

Fredrik Gustavsson was the only player for Sweden to break into the double digits. His 14 points from the opposite position came exclusively from kills. He hit .267 (47%) in the defeat. Viktor Lindberg was the next-highest scorer with 7 points on 6 kills and a block. He had a 32% attack efficiency, but with 7 errors he hit -.052.

Azerbaijan squandered a 2-0 advantage and was only able to earn 2 points from their victory over Luxembourg. They were led by their opposite, Parvis Samadov, and his 15 points. He scored from 13 points and 2 blocks. Right behind him was Dmitry Obodnikov and his 14 points. The middle blocker put away 8 kills and a match-high 6 blocks. Azerbaijan also got 14 points from Rasul Ibragimov. The outside hitter led the match with 3 aces, 1 block, and 10 kills.

Kamil Rychliki was the story for Luxembourg. The outside hitter scored 32 points on 28 kills, 2 blocks, and 2 service aces. Tim Laevert came off the bench in the 1st set to score 16 points on 14 kills and 2 blocks. Mateja Gajin scored 15 points, but he was replaced in the 3rd set due to his 8 attack errors.