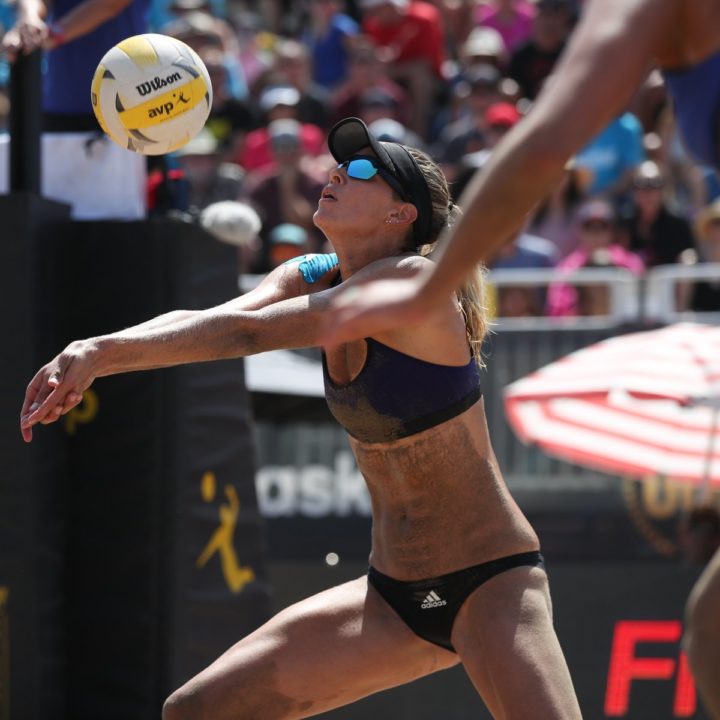 Top seeded Phil Dalhausser/Nick Lucena closed out a perfect 6-0 week with a 12-21, 22-20, 15-13 win over No. 3 Taylor Crabb/Jake Gibb to clinch their fourth AVP Manhattan Beach crown on Sunday afternoon.

Dalhausser capped the come-from-behind effort with a block. The teams were tied at eight in the tiebreak and Dalhausser/Lucena later led 11-9. An ace by Gibb pulled the pair within one at 14-13, but the duo could not stop the final stuff, which clinched their foes a $24,000 paycheck.

Dalhausser managed 15 kills, seven blocks and three aces in the match, including four stuffs in Set 2, while Lucena chipped in 18 putaways and 16 digs. Crabb hit .513 in the match, but the team committed four service errors and gave away 10 points on hitting miscues. Gibb put up four blocks in the loss.

Dalhausser/Lucena, who picked up their third AVP crown of the season following gold in Austin and New York, have now won four of the last five Manhattan Beach Open titles (save 2016). The duo made the championship match after No. 2 Theo Brunner/John Hyden forfeited.

Crabb/Gibb bested No. 6 seed Jeremy Casebeer/Reid Priddy 21-16, 21-16 to reach the title match. Crabb managed 15 kills and nine digs, while Gibb hit at a .650 clip and downed 14 kills to go with three blocks and two aces. Casebeer pounded down a match-high 19 kills and hit at a .615 clip, but it was not enough.

The women’s title came down to top seeded Kelly Claes/Brittany Hochevar against No. 3 Alix Klineman/April Ross in a tiebreak match. In the end, Klineman/Ross picked up their second AVP title of the year, following the gold in Austin on May 20.

Klineman/Ross struck first, winning 27-25. Claes/Hochevar had the first set point try at 21-20, but Klineman tooled the block to tie it up. A Hochevar putaway knotted the score at 24, but a Ross finish clinched the 27-25 overtime win. In Set 2, Hochevar struck first with an ace and the team led throughout, with Claes crushing a cross-court shot for the 21-17 win.

In tiebreak, Claes/Hochevar grabbed the early 4-1 lead, but Ross/Klineman tied it up at 4 on an ace. Another ace, this time by Klineman put her team up 8-7.  The teams tied at 11-all. A stuff by Klineman made it 14-all and a hitting error by Claes gave Klineman/Ross match point, but a service error kept the score at 15-14 in the freeze.In the end, a hitting error by Claes secured the 17-15 win and the AVP Manhattan Beach title for Ross/Klineman.

Ross piled up 29 kills, 15 digs and four aces, while Klineman tacked on 22 kills, four blocks and two aces, to help the team overcome 14 service errors. Claes led the way with a match-high 32 putaways to go with four aces, while Hochevar managed 11 kills, 14 digs and three aces.

In the semifinals rematch of former partners, Hochevar bested Emily Day and her partner Betsi Flint 21-19, 21-19. Flint managed 19 kills and 13 digs, but could not help the team overcome seven points each on hitting errors and service errors in the loss. Hochevar answered with 18 kills and 18 digs, while Claes provided 12 kills, three blocks and an ace.

Klineman/Ross made their way to the final with a 21-18, 21-16 win over No. 5 Kelley Larsen/Emily Stockman. Ross downed 18 kills and committed just one error for an eye-popping .739 hitting effort. Klineman notched 13 kills, three aces and two stuffs. Stockman did her part to keep her team in the game with 14 kills on a .619 hitting clip, but Klineman/Ross were simply better.