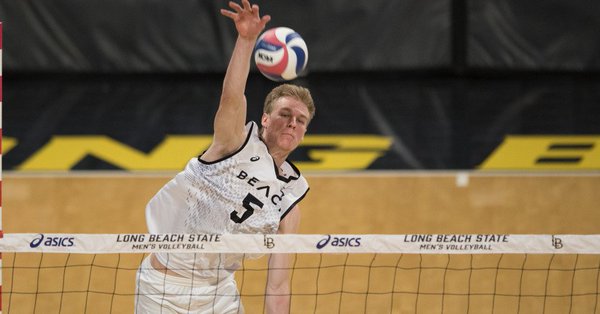 Stat Leaders: Kyle Ensing led all attackers with 10 kills on .350 hitting. TJ DeFalco added 9 kills and a match-high 4 aces. Simon Anderson was perfect in the attack (4 kills on 4 swings) and lead all blockers with 4. Setter Josh Tuaniga ran the efficient offense with 27 assists and was also perfect at the net, going 3-for-3. Libero Jordan Molina led all defenders with 9 digs.

For CSUN, Arvis Greene led the Matadors in his final collegiate match with 9 kills. Dimitar Kalchev finished with 5 kills and a team-high 2 aces. Maciej Ptaszynski had 4 kills on 8 swings while leading the team in digs with 7. Setter Sam Porter couldn’t find another terminator other than Greene, struggling to dish out 14 assists. Josiah Byers earned the team’s only block.

It Was All Over When: CSUN had multiple leads in the first set. Once Long Beach called time-out at 22-all, outscored CSUN 50-32 and did most of their damage from behind the service line. Although it did not show up in the statistical report, keeping CSUN out-of-system by amping up pressure from the service line proved to be the difference.

“In the first set, we had some opportunities, but in sets two and three Long Beach played really well and you’ve got to give them credit,” said CSUN head coach Jeff Campbell. “They’re a good team and they served really well. Long Beach served well in set one, and in set two and three they just dialed it up. They had some serves that were just outstanding. We haven’t seen that many players serve the way they did tonight…they served better than us in that second and third set.”

Key Stats: When UCI finished set 3 with a win, UH could have let down and allowed the Anteaters back in the match. However, UH finished with their strongest offensive set of the season by hitting .630 (18-1-27) to leave no doubt and force a rubber match with top-ranked Long Beach on Saturday. Hawai’i also hit .356 for the match, including a kill percentage north of 50% against UCI.

For UCI, Karl Apfelbach once again led the offense with a team-high 14 kills, 3 digs, 2 blocks and 2 aces. Joel Schneidmiller had an impressive stat line with 7 kills on .429 hitting to go with his team-leading 3 aces, 4 digs and 2 blocks. Setter Dante Chakravorti dished out 37 assists on the night. Libero David Parker had a match-high 11 digs. Scott Stadick finished with 8 kills and a match-high-tying 5 blocks.

It Was All Over When: After UCI fought to win set 3 and continue the match, UH went on a 6-0 run to start the 4th which all but decided the outcome. UCI never got closer than 3 points for the remainder of the match. That 6-0 run was highlighted by 2 kills each from Parapunov and Solbrig and a kill from Rosenmeier.