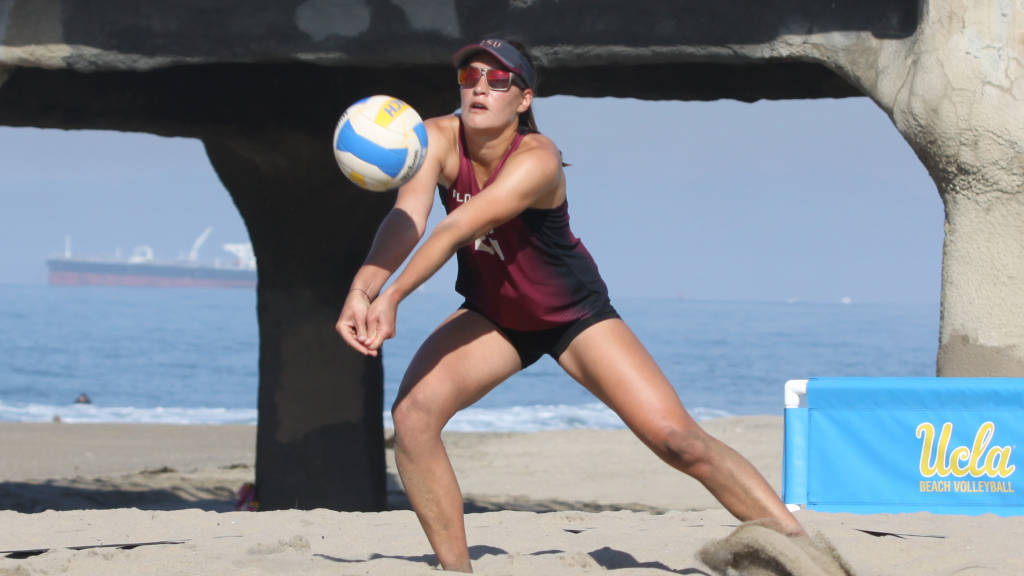 Led by the play of graduate senior Leigh Andrew and sophomore Brooke Kuhlman, the fourth-ranked Florida State beach volleyball team (13-5) started off the Surf & Turf Invitational strong with victories over tournament-host No. 15 FIU (3-2) and Tulane (5-0) on Friday at Lummus Park Beach Courts.

“Leigh and Brooke found a way to win today in tough conditions to help our team,” Florida State head coach Brooke Niles said. “It was really windy and warm and we just have to keep grinding out and competing, which they did a really great job of today. It was not always pretty, but it is good to end the day 2-0. FIU is a really tough team that is well coached. We knew they would be ready to compete.”

Florida State defeated FIU in dramatic fashion. The Noles were down early as redshirt junior Katie Horton and freshman Molly McBain fell in straight sets 21-16, 21-19 on court four. Three of the remaining four matches went three sets. On court five, redshirt junior Hailey Luke and redshirt freshman Eva Torruella won the first set 22-20 before falling in the second set 21-18. The duo regrouped and won the third set 15-10. On court two, junior Vanessa Freire and freshman Francesca Goncalves were able to capture the Garnet and Gold’s second point as they won in straight sets, 21-19, 21-19.

With the final set tied 5-5, FIU’s No. 1 pair of Katie Friesen and Dorina Klinger used a 4-1 run to take a 9-6 lead. However, Andrew and Kuhlman did not panic and came back to tie up the set 10-10, before finishing off the Panthers, 15-11, to win the match for the Seminoles.

“It was a hard fought battle between both teams,” Andrew said. “This was a great win for both of us. Brooke kept a lot of pressure on them with her serve, which put us in a position to win the match. We are going to use this momentum to help play well again tomorrow.”

FSU squared off against Costal Collegiate Sports Association foe Tulane to begin the Surf & Turf Invitational. The Seminoles dominated from the start as they won four of the five first sets and won four matches in straight sets.

It all got started for the Noles on court five as Luke and Torruella captured the Seminoles’ first point in a 21-12, 21-17 straight set win. The winning continued as Horton and McBain achieved a 21-19, 21-17 straight set victory. The Garnet and Gold recorded their match clinching point on court two as Paranagua and Jerger won in straight sets 21-15, 21-16 for their team-high 13th win as a pair and first at the No. 2 position.

For more information on Florida State beach volleyball, check out: