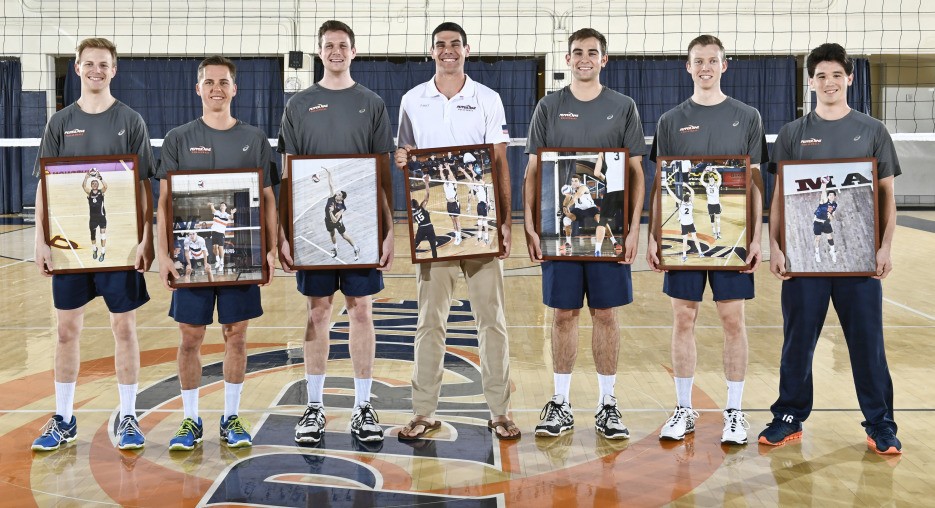 Pepperdine celebrates senior night with a three set sweep over UC San Diego, who made their first appearance on the court since concluding finals.

In the first, the Wave forged ahead to a 9-6 lead, but the Tritons brought the score to a tie at 12 all. The score was traded from then on in the match, with the score ending up tied at 25-25. David Wieczorek slammed down a kill and an attack error by the Tritons ended the first 27-25.

With the score tied at 8-8, the Wave moved ahead in the match to take a late five point lead at 18-13. More Wieczorek kills led to the conclusion of the second match 25-20, leaving Pepperdine up 2-0 in the match.

The Wave dominated the final set of the match, keeping a comfortable distance from the Tritons at 11-6 early. A strong offensive front kept Pepperdine in control before taking the match 25-15.

Wieczorek paced the Wave with 17 kills on a .556 hitting clip, also adding two aces and four blocks. Setter Soren Dion Kindem produced a double-double of 34 assists and 13 digs while Weston Barnes picked up another 10 digs. At the net, Mitchell Penning blocked six balls, with one being a solo block.

For the Tritons, Tanner Syftestad put down 14 kills and seven digs while Ryan Lew picked up 10 digs.

Redshirt-sophomore David Wieczorek(Chicago, Ill./Loyola Academy) led the team with 17 kills on an impressive .556 clip, while also adding four blocks and two aces for the Waves.

Senior Soren Dion-Kindem (Agoura Hills, Calif./Agoura HS) had his fourth-career and second-seasonal double-double to celebrate senior night with 34 assists and 13 digs.  He also picked up four blocks and two kills.

In the first set, the Waves pulled ahead to a 9-6 advantage early on with a strong service output from Penning and kills from Dyer and Carr, but the opposition eventually tied the set at 12’s.  After a few point-for-point exchanges, Pepperdine broke away from a 14-14 tie with smashes from Carr and a Wieczorek ace to gain a 22-17 lead late in the set.  Despite a late comeback attempt from the Tritons, the Waves fought through a 25-25 tie score for a 27-25 victory on a kill from Wieczorek and an attack error from the other side of the net.

The Waves were much more comfortable in the second set.  After exchanging points to the 8-8 mark, the Waves unleased the edge and blocked the way to an 18-13 advantage including collaborations from Dion-Kindem and Carr, Carr and Wieczorek and Wieczorek and Penning.  Late in the set, Penning, tabbed another smash, along with back-to-back kills from Wieczorek to make it a 25-20 set score and put the Waves up 2-0.

Next, the Waves travel to UC San Diego and No. 5 UC Irvine on April 7 and 8 to close out the regular season.  Follow Pepperdine @PeppVolleyball on Twitter and Facebook for immediate updates and head to PepperdineWaves.com for recaps, results and more.

The University of California San Diego played well in spurts but could not stop No. 8 Pepperdine University when it counted most, losing a Mountain Pacific Sports Federation (MPSF) men’s volleyball match 3-0 inside Firestone Fieldhouse on Thursday night. Set scores were 27-25, 25-20 and 25-15.

The result snaps a two-match win streak for UC San Diego, which falls to 7-16 overall and 3-12 in the MPSF. The Tritons had been idle from competition since March 17 for winter quarter final exams. In its home finale on Senior Night, Pepperdine posted its first straight-set triumph of 2017 and improved to 9-10 overall and 7-9 in league play. The defeat does not officially eliminate the Tritons from MPSF Tournament contention, nor does it clinch a berth for the Waves. The two teams will complete their season series in La Jolla next Friday, April 7.

The opening set was tied at 1-1, 2-2, 3-3, 4-4 and 5-5 before back-to-back Triton hitting errors spurred a 3-0 mini-run that gave the home side an 8-5 lead. The sides traded single points until senior middle blocker Shayne Beamer‘s float serve landed for an ace to put UCSD within one at 11-10. A kill and an ace by junior opposite Tanner Syftestad knotted the score again at 12-12, before the night’s first blocks, by Milosh Stojcic and Bryan Zhu, gave the Tritons their first lead at 13-12. Three straight Wave points forced UCSD into the contest’s first timeout, down 16-14.

Pepperdine took its largest lead at 19-15 to bring about the Tritons’ final timeout. A combination block by Beamer and redshirt junior tri-captain Calvin Manchenko, in the starting lineup for the first time this season at outside hitter, made it 22-18. Beamer punctuated a lengthy rally with a big kill at 22-20 as the Waves called their first timeout. Another long rally also went the way of UCSD on a long attack to turn away the first set point, and Syftestad served an ace to save another one and cause Pepperdine’s last timeout. Manchenko’s kill off the tape and down leveled matters again at 24-24. Syftestad denied a fourth set point with a kill for 25-25, but the Waves converted on a fifth set-point opportunity to win it, 27-25.

UCSD held a one-point edge through the early part of game two, including at 6-5 as Stojcic slammed down the free ball from his setter spot. The Waves ultimately grabbed the advantage back, however, with a Triton timeout necessary at 17-13. Pepperdine hit .593 (17-1-27) en route to the comfortable set victory, 25-20.

The Waves gradually built an 11-6 cushion at the first break in the third, and cruised from there to complete the sweep.

Syftestad led UCSD in kills for a 19th consecutive match with 14. He added two aces in the first and seven digs. Manchenko finished with a career-best nine digs. Freshman libero Ryan Lew provided a team-high 10 digs in his return to the court following a one-match absence due to injury. Stojcic wound up with 29 assists and a pair of kills on two attempts. Junior middle Alec Flowers had a team-high three blocks off the bench in the third. Senior Ian Colbert collected eight kills and five digs.

“Coming off of our last two matches, both victories, along with a good week of practice, we were definitely excited heading into this match,” said UCSD head coach Kevin Ring. “I felt like we could play at a high level, be competitive and look to win the match. We played a pretty good first set. Pepperdine had a couple of runs to take leads, and we had to work real hard to get ourselves back in the set. The same thing happened late. They were up 24-21. We did a great job of tying up the game, but we had to work so hard just to tie it, and they went on to win, 27-25. What we never did do tonight is really establish a lead and hold it for a while.

“They just outplayed us tonight. If you’re going to beat a team as disciplined as Pepperdine, you have a find something you’re going to clearly do better than them on that night. We played them even in some areas. I thought the serving was pretty even. They had a few more blocks and digs than us. Other than that, they outplayed us. We will definitely play better when we host them in just over a week.”

Redshirt sophomore outside hitter David Wieczorek led all players with his 17 kills and .556 (17-2-27) hitting, and served both of Pepperdine’s aces. Setter Soren Dion-Kindem had a double-double with 34 assists and a match-best 13 digs.

UC San Diego flies to the Bay Area this Saturday, April 1, to take on ninth-ranked Stanford inside Maples Pavilion later that same evening at 6 p.m. The match will be broadcast to a national television audience on Pac-12 Bay Area.