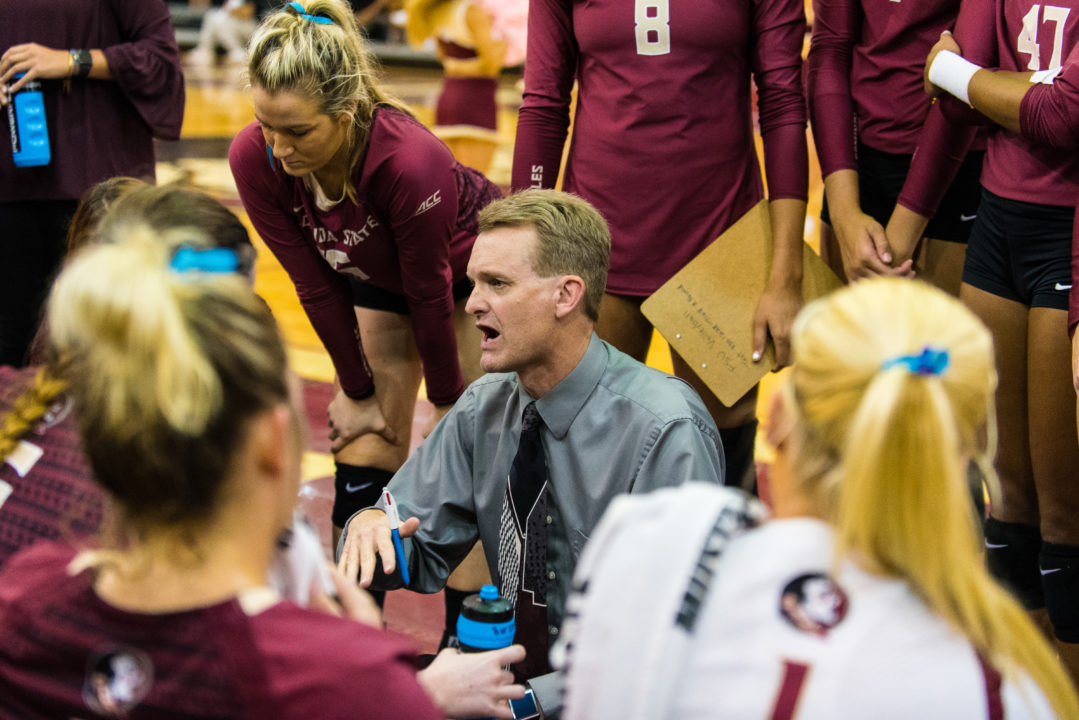 TALLAHASSEE, Fla. – It took a little longer than expected, but Florida State coach Chris Poole notched his 800th career Division I victory on Friday as Florida State topped Syracuse. Poole recorded his 800th overall win in 2016, but needed 13 wins to boost his Division I total to the plateau. Poole is currently the fifth-winningest active Division I coach, and boasts 823 career victories across divisions.

Senior outside hitter Natasha Calkins (17), senior outside Milica Kubura (16) and redshirt junior outside Christina Ambrose (13) each turned in double-digit kill efforts and hit .300 or better to lift FSU to victory.

After dropping the first two sets, Syracuse rallied from down 21-16 in the third to seemingly earn the first set-point try of the stanza at 24-23. Kills by four different players buoyed the rally, with Lukacs and Gorelina chipping in two apiece. The final point of the rally was overturned via challenge and Ambrose added a kill to give FSU a match-point try at 25-24. The Seminoles would have three more as Knuth and Calkins added putaways, but Syracuse answered the call each time. A stuff by Oyawale and Witherspoon knotted the score at 28 and two Florida State hitting errors capped the Orange victory at 30-28.

The teams split the first 22 points of Set 4, before Syracuse surged ahead with a 6-0 run. Gorelina downed three kills and Dana Valelly added an ace as the Orange went up 17-11. Florida State chipped away, starting with a 5-0 run to narrow the gap to three at 19-16. Calkins notched two kills and three Cuse miscues aided the Seminole cause. Kubura and Ambrose came through to cut the deficit to one at 21-20.  An Oyawale kill and FSU miscue put Syracuse up 23-21. An Ambrose kill and an error knotted the score at 23. A Gorelina putaway had Syracuse poised to send the match to a decisive fifth set at 24-23, but Florida State stopped that attempt with an Ambrose kill and a block by Knuth and Calkins gave FSU another match-point try. A hitting error by Gorelina clinched the milestone win for Coach Poole and snapped a three-match losing skid.

A huge congrats to @Chris_PooleFSU, who earned his 800th career Division I win tonight with our victory over Syracuse! pic.twitter.com/ptdsEZ9hE3