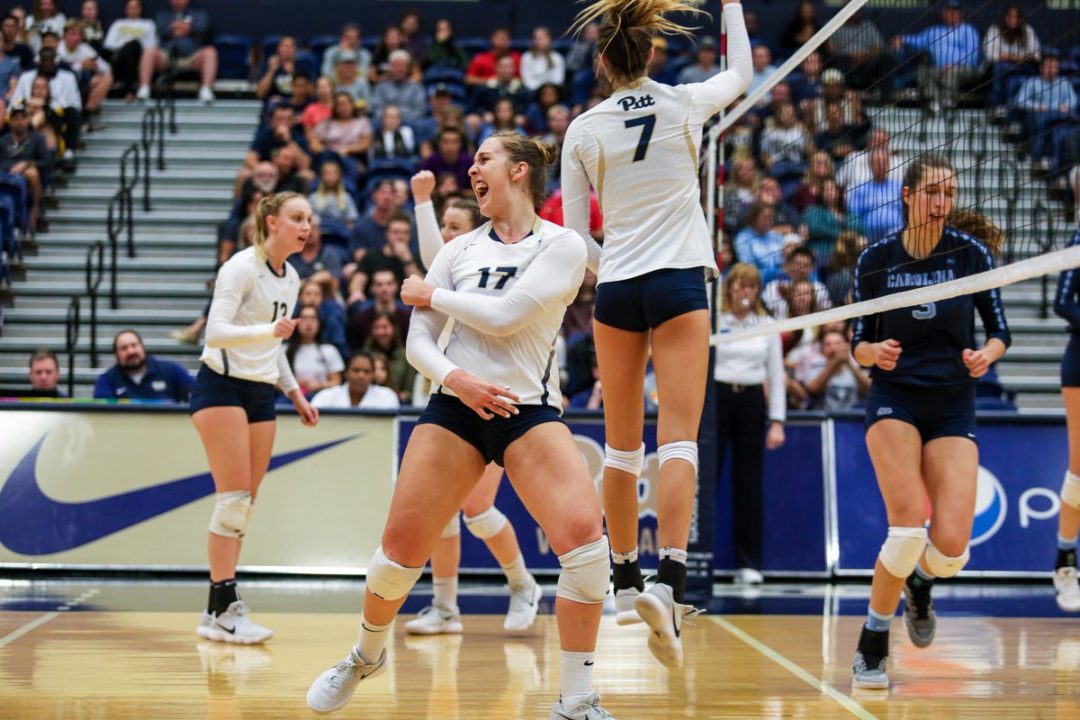 The Pittsburgh Panthers stayed level with NC State and Louisville atop the ACC standings are 13-2 with a sweep of Wake Forest on Friday behind a big night by right side hitter Nika Markovic. Archive Photo via Pittsburgh Athletics

PITTSBURGH, Pa. -The Pittsburgh Panthers stayed level with NC State and Louisville atop the ACC standings are 13-2 with a sweep of Wake Forest on Friday with a big night by sophomore right side hitter Nika Markovic.

Markovic was all over the stat sheet for Pitt, notching a match-high 17 kills on a team-best .438 hitting effort, while also managing four digs, two blocks and two of the team’s four aces. Sophomore middle blocker Layne Van Buskirk chipped in 12 kills and two blocks, while freshman outside hitter Kayla Lund accounted for 11 kills and 10 digs. Redshirt sophomore outside hitter Stephanie Williams posted a team-best 11 digs and seven putaways.

Wake Forest led by as many as six in Set 1, last at 20-14, but couldn’t hold off a late Panther run, falling 28-26. Pitt chipped away at the deficit, eventually tying the score at 23 with help from two kills and two blocks by Van Buskirk and three Markovic putaways. A solo stuff by Williams gave Pittsburgh the first set point try at 24-23. A solo block by Rassenfoss thwarted that attempt and a hitting error gave the Demon Deacons a try of their own at 25-24. Wake had another chance at closing things out at 26-25, but Pitt rallied with three straight kills, the first by Markovic and the last two by Williams, to steal away the set.  Early on the teams ties 10 times, last at 11 before Wake Forest pulled away with a 5-0 run, including two Pittsburgh errors and an ace by Caroline Wolf. The teams traded points until a kill and a block by Long gave Wake the 20-14 edge.

Pittsburgh jumped ahead 8-5 in Set 2 as Markovic notched two kills, a block and an ace and Angela Seman also added a perfect serve. The Deacs tied it up at 10 and went on to a 16-13 lead of their own with help from four Pitt miscues and a pair of Moore putaways. Down three again at 20-17, the Panthers started their comeback with a 4-0 run, including a kill each by Chinaza Ndee and Kayla Lund and a stuff by the duo. Wake knotted the score at 21, but Pitt closed out the set on a 4-1 run. Lund and Markovic turned in two kills apiece down the stretch.

Pitt built an 8-6 lead in Set 3, only to see it swept away by a 6-1 Demon Deacon rally. Two kills each by Long and Kuhn and a pair of Panther errors lifted Wake Forest to a 12-9 advantage. Pittsburgh scored four of the next five, including a kill, a block and an ace by Markovic, to tie things up at 13. An ace by Wolf and two more Pitt miscues raised the Demon Deacon advantage to four at 17-13. The Panthers chipped away and eventually knotted the score at 19. Three players tallied kills, including two by Williams, in the rally. A kill by Markovic tied the score at 20, kicking off a final 6-2 run. Three Markovic putaways and two Demon Deacon errors put Pitt on the hill at 24-21. A Long kill kept the set going, before Van Buskirk closed the door at 25-22 to end the night.