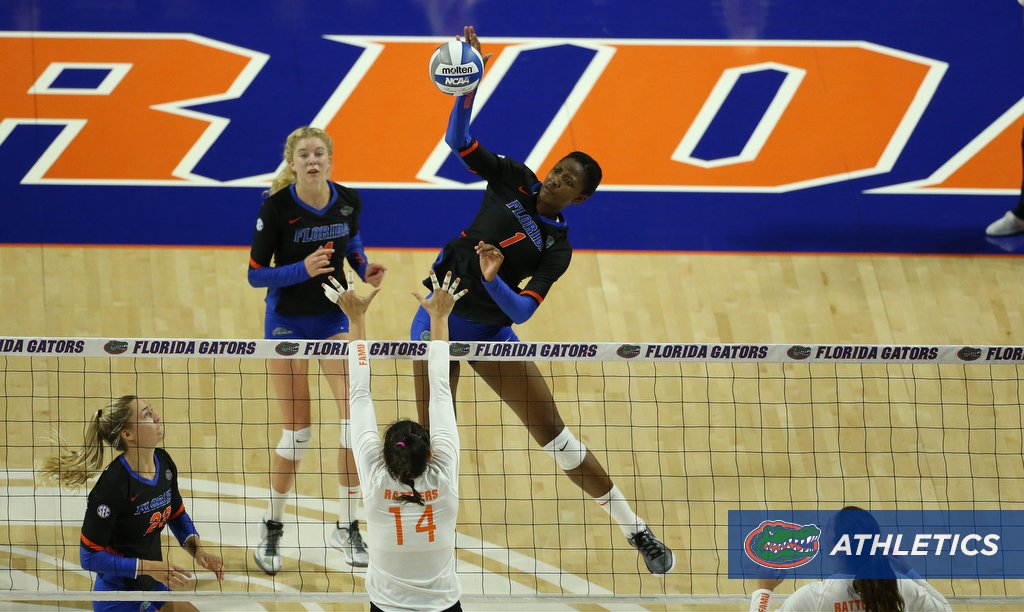 Florida senior middle blocker Rhamat Alhassan was a dual honoree after leading UF to a 3-0 mark at the Gator Invitational last weekend to move the team to 7-0.  Current Photo via Florida Athletics/Tim Casey

Florida senior middle blocker Rhamat Alhassan was a dual honoree after leading UF to a 3-0 mark at the Gator Invitational last weekend to move the team to 7-0.

Alhassan was named the SEC’s overall Player of the Week and its Defensive Player of the Week honoree for her efforts at the tournament as Florida topped Florida A&M, Northern Kentucky and Lipscomb. The Glenarden, Maryland, native racked up 2.60 blocks per set en route to all-tournament team nods. With 26 blocks on the weekend, including 12 in the finale against Lipscomb, Alhassan moved into second place in the Florida history books with 452 career block assists, and third with 530 career blocks. The middle blocker also chipped in 28 kills and six digs, while hitting at a .404 clip.

Arkansas’ Pilar Victoria snagged Offensive Player of the Week accolades after posting 5.75 kills and 2.25 digs per set at the SMU Doubletree Classic. The redshirt senior outside hitter hit at a .382 clip in wins over Sam Houston State and SMU. Against SHS, the Caguas, Puerto Rico, native managed a team-best 15 kills, a .444 hitting effort, eight digs, two aces and two blocks. In the victory over SMU, Victoria registered 31 kills, while hitting at a .355 clip and adding 10 digs to round out a double-double.

Sophomore setter Meghan Donovan of Georgia earned Setter of the Week honors after dishing out 11.36 assists per set and adding a pair of double doubles as the Bulldogs went 2-1 on the week. The St. Louis, Missouri, native also added four aces. Against Texas Tech, she guided the team to a .314 hitting effort, while racking up 53 assists and 16 digs. In the four-set rivalry win over Georgia Tech, Donovan managed 44 assists and 14 digs.

Rounding out the SEC’s weekly awards is Georgia’s outside hitter T’ara Ceasar, who garnered Freshman of the Week accolades. Ceasar paced the Bulldogs with 4.73 kills and 4.18 digs per set, while also serving up six aces. After narrowly missing a double double on Wednesday against Kennesaw State (13K, 9D), the rookie posted 23 kills and 19 digs against Texas Tech on Thursday and wrapped up her week with a 16-kill, 18-dig double-double and five aces against Georgia Tech.