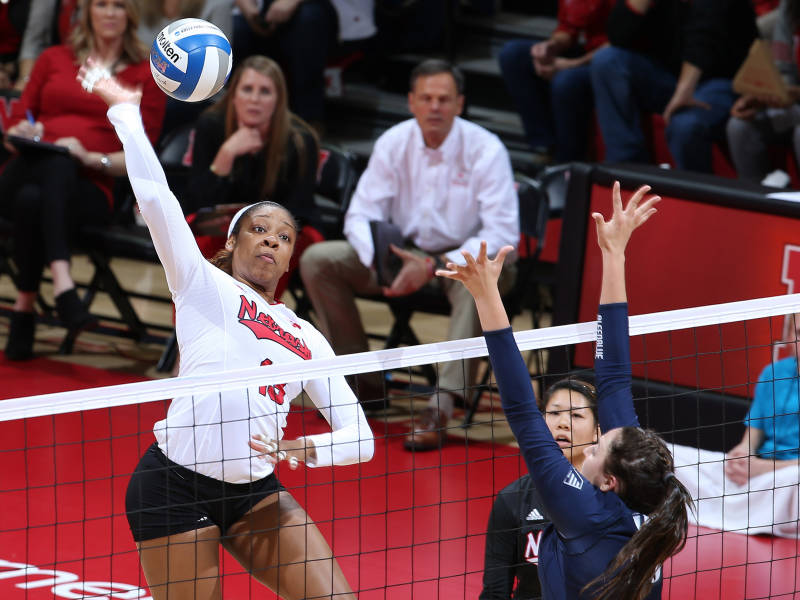 Nebraska middle blocker Briana Holman had to leave the team’s Saturday-evening win against Nebraska-Omaha on Saturday after suffering an ankle injury.... Archive Photo via Nebraska Athletics

Nebraska middle blocker Briana Holman had to leave the team’s Saturday-evening win against Nebraska-Omaha on Saturday after suffering an ankle injury. While head coach John Cook says that it’s still going to take a few days of treatment to know the extent of the injury, that Holman’s ankle isn’t broken. Instead, the team is currently treating it as a sprain.

“It’s just whether she’s out a week, two weeks. That’s what it’s going to be,” Cook said.

That would seem to rule her out for at least the team’s Big Ten opener on Friday against #2 Penn State.

The Huskers have one of their toughest stretches of Big Ten play to open their conference schedule. The team’s first 3 weeks look like this:

Last year, in her first season in Lincoln after two All-American seasons at LSU, Holman ranked 3rd among all Nebraska players in total points (358) and points/set (3.06) while starting all 34 matches on the season. She also led the team in hitting percentage (.350)  and was 2nd in total blocks (138) behind now-graduated Amber Rolfzen. Holman also leads the team in total blocks (40) so far this season. In her place, Chesney McClellan, a 6’4″ freshman, came into the match for her collegiate debut.