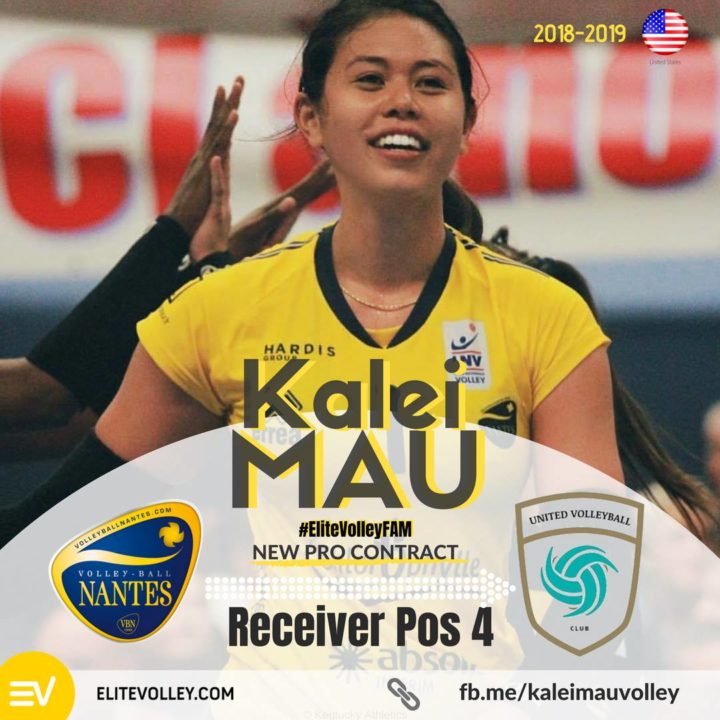 Kalei Mau has signed her 3rd professional contract and will head to the Philippines in the next few days. Current Photo via United Volley Cocolife

2016 AVCA Third-Team All-American Kalei Mau has signed her 3rd professional contract to join United Volley Cocolife in the Philippine Superliga. Mau, who was born in Hawaii, is half Filipino on her mother’s side. That means she’s able to play in the Filipino league as a local, rather than a visiting, player.

Mau is working her way back from what she calls a “minor corrective shoulder surgery.” She spent her first two professional seasons with Mayaguez Indios in Puerto Rico for 2016-2017, and then with Nantes Volley-Ball in France for 2017-2018.

“She has had a very complicated first professional experience with this injury, but she is still a player with a lot of physical potential, and in view of her youth, she will certainly be able to continue her career as a volleyball player, once her recovery is over,” said Nantes coach Sylvain Quinquis. “It was a good experience for the club, but too short. Good luck to her!”

The 6’1″ outside hitter started her college career at Minnesota before transferring to Arizona for her last 3 seasons. In 2015 she averaged 4.33 kills/set and in 2016 she averaged 4.07 kills/set, while posting back-to-back 277 dig-seasons as a 6-rotation player. Her serve drastically improved during her senior year, where she recorded 21 aces: three times as many as she had a year earlier. She also hit .225 as a senior, up from .169 a year earlier.

A video of Mau’s highlights from her senior season at Arizona: