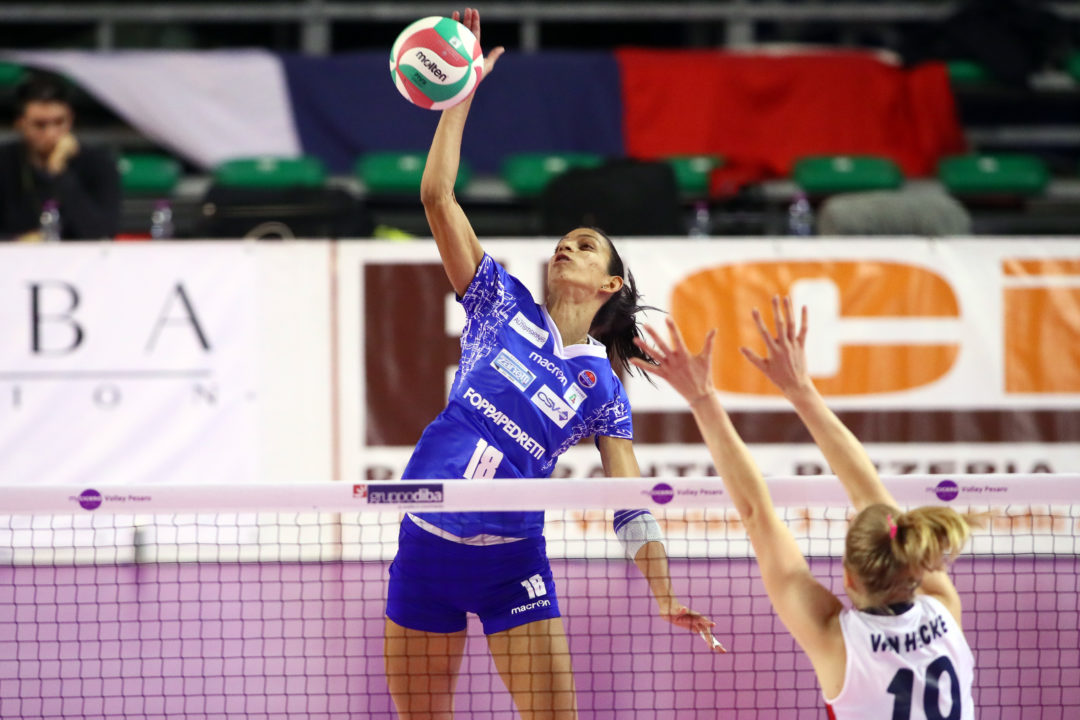 One of Bergamo's few bright spots last season was the play of former University of Arkansa's Roslandy Acosta Current Photo via http://www.legavolleyfemminile.it

One of Bergamo‘s few bright spots last season was the play of former University of Arkansa’s Roslandy Acosta. She paced the team’s offense with a respectable 4 points per set average, while also taking care of the team’s passing lanes. Although her hitting percentage left a bit to be desired, at 39%, this number is inflated due to the many number off dumped balls she was set as the team’s often primary offensive choice.

Bergamo, which finished the regular season with a 7-15 record, was able to fend off relegation at the last minute, and is now set on trying to improve its roster for next season so as not to live in the same dire straits as before. One of its first steps towards that goal was the extend’s Acosta contract, which it did, recently announcing so in its official website. Here is how the player reacted:

“When it was time to decide whether to stay or change teams, in my mind there was only one thought: to stay. I liked everything and everyone in my first year in Bergamo: the staff, the company, the people, the fans and then the city, so warm but quiet. I felt at home. Coming to play in Italy was a dream come true, I was happy to come here. And I was happy to have chosen Bergamo, because I felt loved every day. I worked hard to get here and I want to continue to do so, so as to deserve deserve it: I will work hard every day to live up to this team’s standard. I know we had a difficult season, but I’m sure the next one will be good and we’ll do well and be be among the top teams of the next championship. I heard many good things about Matteo Bertini and I saw what he did with Pesaro. I want to start working with him.”

The 26 year old Acosta is part of Venezuela’s national team since 2008, the same year she participated in her only Olympic Games so far (at only 16 years old). She joined Arkansas prior to the 2011 season after spending two years at Cowley College where she was an All-American and the 2010 AVCA Two-Year National Player of the Year. After graduating in 2013, she played in Puerto Rico, Finland, Switzerland, and Germany before settling in Bergamo.