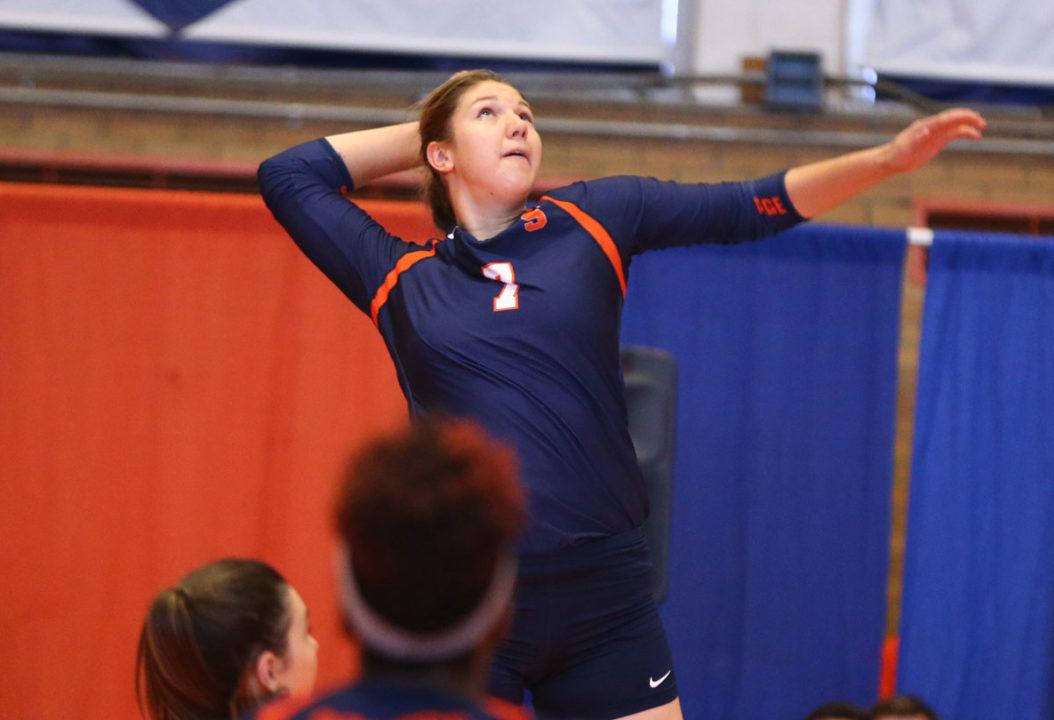 Coming off a difficult season, the Buffalo Bulls added three talented transfers in an attempt to turn things around. Archive Photo via Buffalo Athletics

After winning 35 matches in two seasons, Buffalo has only totaled 11 wins in the last two years. Coming off a four-win season in 2016, Buffalo only has one senior for 2017. In fact, 11 of the 16 players on the roster are underclass-women. So as Buffalo rebuilds, they’ve decided to bring in some talent from elsewhere via the transfer market in the form of Polina Prokudina, Larra Bickelhaupt and Kristina Nieves.

The leader of the group is Polina Prokudina, a transfer from Syracuse. Prokudina brings length to the Buffalo front line as a 6’4″ outside hitter. She also provides experience playing at a high-level in the ACC – something that can be a strong example for Buffalo’s young squad. She logged her career-high of 16 kills last year against Virginia Tech and also had a double-double (12 kills, 10 digs) against Boston College. For the full season, Prokudina totaled 69 kills, 48 digs and 12 blocks. Originally from Russia, she also was part of a team that won the Russian Country Championship in 2015.

“We are very excited for Polina to join us this fall,” said Buffalo head coach Blair Brown Lipsitz in the release.  “She has a great all-around game and steady presence on the court.  She has been competitive in a strong conference and we are looking forward to her contributions in our gym this season.”

Bickelhaupt, a 5’10” libero/defensive specialist, comes to the Bulls by way of Hillsborough Community College. She attended HCC for two seasons where she played both as a libero and outside hitter, earning NJCAA second-team All-American. As an incoming junior, she will be one of the more experienced players and will have two years left of eligibility.

“Larra brings stability and a great demeanor to the court,” said Lipsitz in the Buffalo announcement. “She has already shown that she has the ability to make an immediate impact with her experience and understanding of the game.”

The final transfer coming in is Kristina Nieves, who should pair with Prokudina to create a strong defensive force up front as a 6’3″ middle blocker. Nieves appeared in 25 matches as a freshman last season at Saint Peter’s College. She was fourth on the team in kills and second in blocks.

“Kristina is a quick athlete pin-to-pin who can dominate net play,” said Lipsitz in the news. “We are very excited to see her develop in our gym as she joins a talented group of middles.”

Of course, the trio isn’t the only Buffalo news on the transfer market as Madison Clark transferred out of Buffalo to East Carolina. However, with the three transfers coming in it gives Buffalo six newcomers in 2017. Coming off a four-win season that might not be the worst thing as the team can now build up the program together. In the meantime, Prokudina, Bickelhaupt and Nieves should help right the ship in 2017 for the Bulls.