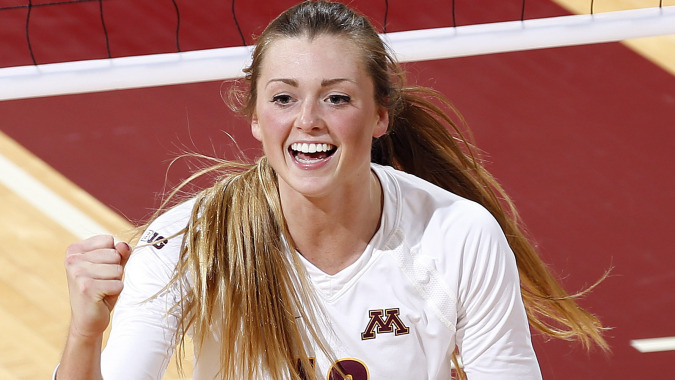 After ranking in the top five in career blocks at Minnesota indoors, Molly Lohman is heading to TCU Beach for one final season. Archive Photo via Minnesota Athletics/Volleyball

Former Minnesota middle blocker Molly Lohman is transferring to the TCU beach volleyball program for her final season of collegiate eligibility. A recent graduate from the University of Minnesota, Lohman will be immediately eligible for the 2019 beach season.

A native of Mankato, Minnesota, Lohman came to Minnesota in 2014 and played in 51 sets as a true freshman. Her opportunities skyrocketed as a sophomore in 2015 and carried on her final three seasons as she appeared in a pair of Final Fours in her middle two years.

A 6’3″ middle blocker indoors, Lohman is likely to play the attacker role as a hitter/blocker for her pair.

TCU beach finished the 2018 spring season at 10-22 overall with four seniors on the roster.

so so excited to announce my commitment to TCU for a year of beach volleyball!!! can not wait to see what this path has in store GO FROGS ?