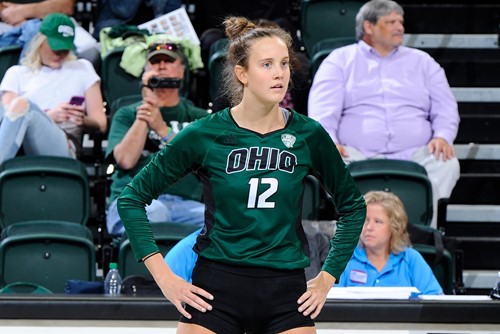 6’4″ middle blocker Natalie Burchesky is transferring out of Ohio and is headed to Eastern Kentucky for the 2018 season. A redshirt junior-to-be in the fall, Burchesky will have two years left of play and be immediately eligible in the upcoming season.

“Natalie is coming from a very well-respected program in Ohio University,” Eastern Kentucky head coach Lori Duncan said in the team’s release of the news. “She will come in and be a viable force when it comes to our ability to defend the court. She’s a great blocker and that will help us defensively tenfold.”

In her most recent season as a redshirt sophomore in 2017, Burchesky played in eight matches and 14 sets. That was similar to her 2016 season when she saw time across eight matches and 17 sets after redshirting as a true freshman in 2015.

A native of Canonsburg, Pennsylvania, Burchesky attended Canon-McMillan high school prior to her collegiate career. With the school she helped the team win a sectional championship.

The other transfer joining Eastern Kentucky in 2018 is Lindsey Wilkins, an outside hitter formerly of Indiana State. They’ll look to impact a team that went 13-19 last season and 10-6 as a member of the Ohio Valley Conference.