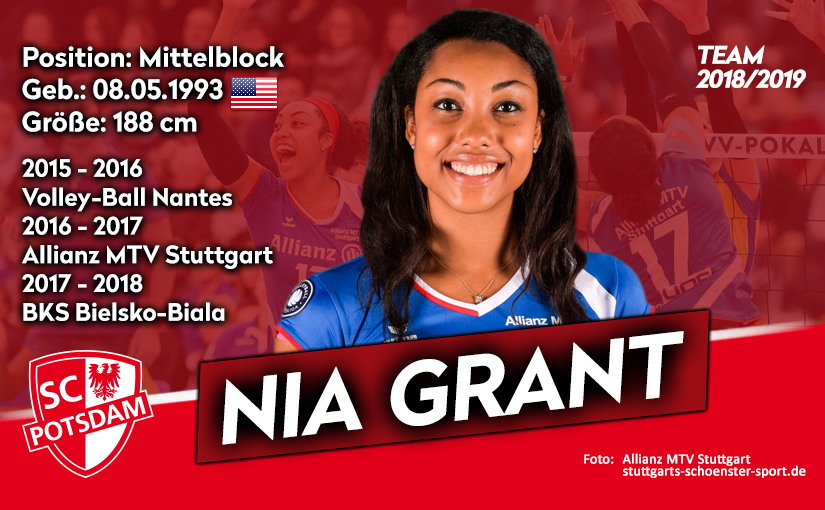 Grant was an AVCA All-American Honorable Mention and All-Big Ten selection at Penn State Current Photo via Available at http://www.sc-potsdam.de/volleyball-bundesliga/

Bundesliga’s SC Potsdam has announced in its official website the signing of former Penn State star Nia Grant. The 25-year-old American is transferring out of Poland’s BKS Bielsko-Biala. This will be her second stint in Germany, as she played with Stuttgart during the 2015-16 season. She also had a one-season stint in France with Nantes to start out her professional career.

“We are delighted that Nia Grant has chosen us. She was one of Stuttgart’s best middle blockers in the league in her first Bundesliga sting. We had her in sight for a while. With her, we again increase our team’s quality.  She has a lot of confidence in her attacks.”

Grant was an AVCA All-American Honorable Mention and All-Big Ten selection at Penn State. As a senior, her .458 hitting percentage ranked second in the nation. Coming from a sporting family, she is the daughter of African Grant, who played for the Miami Dolphins in the NFL.

Potsdam finished its latest Bundesliga season in 7th place with a 9-11 record. It was bounced from the playoffs by Dresdner in the Round of 8.

“Don’t lose that spark because it’s not happening when you want it to happen. Be patient, live in the moment, and sometimes you might just have to pull up a chair and make your own spot at the table.” #Sports #Athletics #Volleyball #Lessons