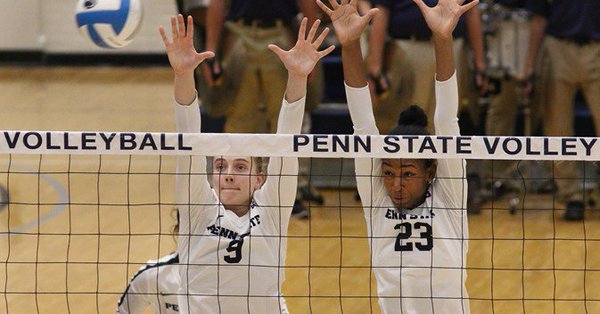 Big Ten Conference play continues this weekend with all 14 teams in action. Four matches will be carried on BTN, two on ESPNU and the remaining matches will stream live on BTN Plus.  Current Photo via Penn State Athletics

Conference play continues this weekend with all 14 teams in action. Four matches will be carried on BTN, two on ESPNU and the remaining matches will stream live on BTN Plus. The Big Ten will feature two top-20 matchups on linear networks this week.

• Based on past opponents’ winning percentage, Illinois has played the fourth-toughest schedule in the nation. The Illini hold a 5-2 record against top 25 teams this season.

• Big Ten students currently occupy five of the top-25 spots nationally in hitting percentage. Minnesota’s Taylor Morgan leads the Big Ten and ranks fourth nationally with a .429 hitting percentage. Wisconsin’s Dana Rettke is No. 14 hitting a clip of .407. Michigan State’s Naya Gros is 15th with a .403, Nebraska’s Lauren Stivrins (.394) is No. 21, and Illinois’ Ali Bastianelli is No. 25 hitting a clip is .384.

• The 2018 Big Ten volleyball television package features 39 contests televised live, with 33 of those matches airing live on BTN, and highlighted by eight doubleheaders. Six other matches will be carried live on ESPNU. This week, Indiana at No. 5 Nebraska, Michigan State at Maryland, Northwestern at No. 8 Wisconsin and No. 5 Nebraska at No. 9 Penn State will be featured on BTN, while No. 9 Penn State at No. 17 Purdue and Michigan State at Ohio State will be live on ESPNU.