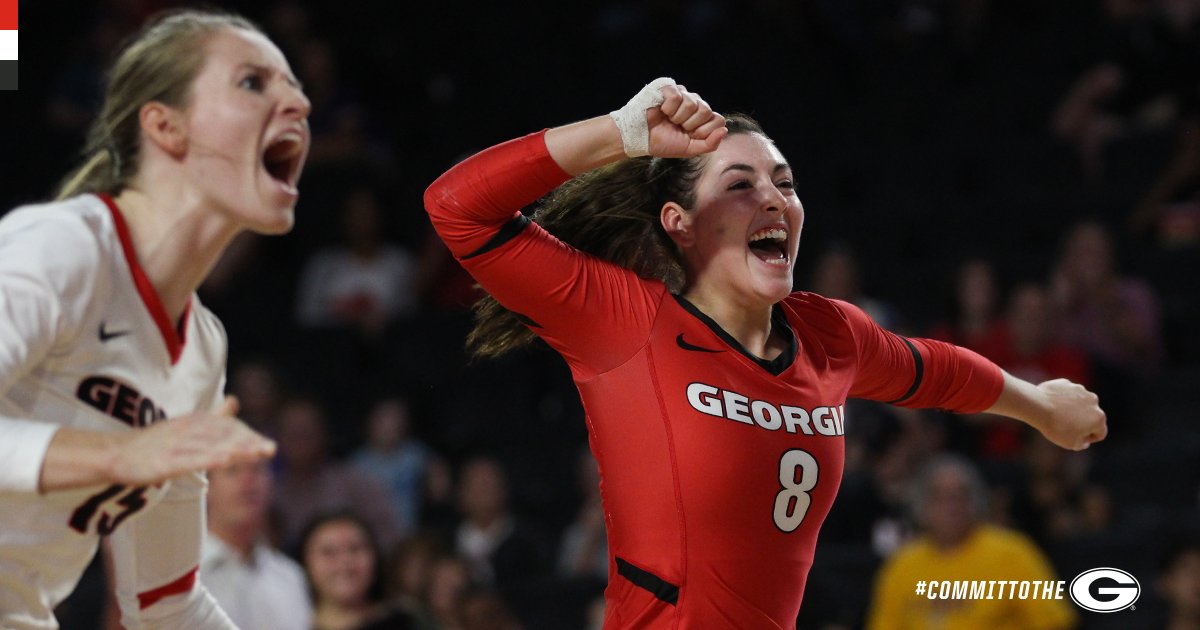 Georgia volleyball concludes its three-match road stretch with a matchup at LSU on Wednesday. The Bulldogs bested the Tigers in five sets on Sept. 21.  Current Photo via Georgia Athletics

• The match will be streamed live via WatchESPN and the ESPN app.

• Live stats will be available. Links can be found on the volleyball schedule on GeorgiaDogs.com.

• Georgia had not defeated LSU in Athens since Oct. 7, 2008. The Bulldogs had lost seven-straight meetings with the Tigers in the Classic City.

• Prior to last season’s meeting, Georgia had lost five-straight matches to LSU, the last win being 2013 in Baton Rouge.

• Georgia is 8-17 all-time in Baton Rouge, winning three of the last five matches on the road.

A Look at What’s Ahead

Georgia returns home to host Texas A&M on Sunday, Oct. 14 at 2 p.m. The rematch with the Aggies will be Georgia’s annual Dig Pink match at Stegeman Coliseum. Fans are encouraged to wear pink. 200 pink t-shirts are available to fans with a $5 donation. Players will also be available for post-match selfies on Sunday.

Recap from the Last Meeting With LSU

Georgia opened SEC play against the Tigers on Sept. 21 at Stegeman Coliseum. Georgia won the first two sets but LSU stayed alive to force a decisive fifth set in the conference opener. The Bulldogs prevailed in the end, 15-11. Rachel Richie earned a season-high 24 kills, along with T’ara Ceasar getting her season-high and fifth 20-kill match (24). As a team, Georgia recorded 75 kills. The mark is the second-most in Georgia rally scoring history for a five-set affair. Defensively, Anna Kate Karstens tied a season high with seven blocks while three Bulldogs reached double-digit digs marks: Kendall Glover (16), Meghan Donovan (10), and Sydney Gilliam (10).

Georgia volleyball held a 2-1 set lead over #11 Florida Sunday, but the Gators prevailed in the five-set match at Exactech Arena (13-25, 25-22, 25-22, 21-25, 9-15). T’ara Ceasar tallied 17 kills while Rachel Ritchie picked up 13 on the afternoon. Kianna Young recorded a new career-best 12 kills with a .286 hitting clip. For the second match in a row, Georgia had four or more players with double-digit digs. Ceasar’s 19 digs led the team, also notching her seventh double-double of the season, 16th of her career. Kendall Glover had 13, Sydney Gilliam had 12, and Claire Rothenberger had 10 in Gainesville. On the net, Georgia had a season-high 11 team blocks. Majesti Bass had eight blocks with eight kills on Sunday.

In the latest RPI

Five of Georgia’s six SEC matches have gone to five sets this season. In all, the Bulldogs have played eight five-set matches, going 3-5 in those contests. All five of Georgia’s losses on the season have come in five sets. In three of the five fifth-set losses, Georgia has lost by three points or less. Georgia has dropped those five fifth sets by a combined 19 points.

T’ara Ceasar hasn’t skipped a beat after a breakout freshman campaign. The sophomore ranks 30th nationally, fourth in the league, with 4.25 kills per set. Her 293 total kills ranks second in the SEC and 23rd in the country. She has scored 4.75 points per sent, a figure that ranks fifth in the SEC and 26th in NCAA.

Junior setter Meghan Donovan’s 11.3 assists per set ranks 15th in the country while leading the SEC in the category. In the match at Ole Miss on Sept. 28, Donovan notched her 3,000th-career assist. She became only the seventh Bulldog setter to tip the 3,000-assist mark in her career. Her 10.64 assists/set in her career ranks 12th among active Division I setters. She recorded a new career-best 62 assists at Auburn on Oct. 3. As a team, Georgia leads the conference with 12.81 assists per set.

The Steg is Rockin’

Georgia ranks fourth in the SEC with an average attendance of 1,410 per match. That figure also cracks the top 30 in the country for average attendance. So far this season, 7,052 have flocked to Stegeman Coliseum to cheer on Georgia volleyball.

Georgia ranks 38th in the country, third in the SEC, with 1.6 aces per set. The Bulldogs have picked up where they left off a season ago at the service line as they averaged 1.57 aces per set to lead the league. Against Texas Tech, Kendall Glover tied a Georgia rally scoring record with seven aces in a three-set match.

The Bulldogs concluded non-conference play 9-2 including five sweeps. Georgia’s lone losses came in five-set matches. As a team, Georgia hit .254 against its opponents with 13.83 kills per set. The non-conference season was highlighted by a victory over then-#24 Colorado. Georgia won three of four tournaments. T’ara Ceasar earned two MVP titles while Meghan Donovan had one. Donovan was named SEC Setter of the Week three times during the non-conference span.

The Bulldogs received votes three AVCA Top 25 Coaches Polls this season. Georgia last cracked the Top 25 in 1995, achieving a season-high ranking of 22. The highest the Bulldogs have ever been ranked was #13 in 1993.