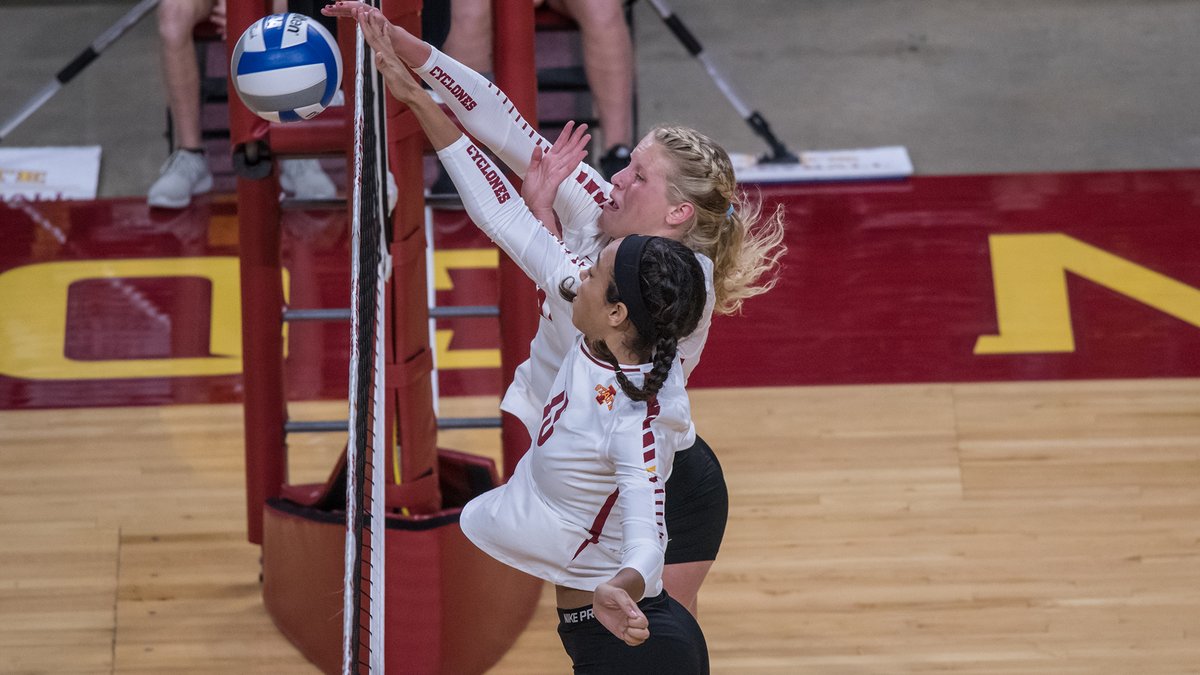 Fourteen blocks helped the No. 24 Cyclones limit TCU to a -.043 hitting effort in a Saturday sweep.  Archive Photo via Iowa State Athletics

AMES, Iowa – Fourteen blocks helped the No. 24 Cyclones limit TCU to a -.043 hitting effort in a Saturday sweep.

For its part, the Iowa State offense hit at a .365 clip and outdid the Horned Frogs 36-23 in kills and 8-5 in aces. ISU also bested TCU in digs 39-29 and blocks 14-1. The Cyclones held TCU to a negative hitting percentage in all three sets.

The Cyclones hit at a .522 clip in Set 1 and grabbed an early 11-3 advantage. Conaway notched three kills and a block, while three TCU miscues aided the effort. The Frogs cut the margin in half at 12-8 with help from three ISU errors. Two kills each by Schaben and West lifted the margin back to eight at 20-12. A service error stalled Iowa State momentarily, but the team wrapped up the win on a 5-1 run, including two blocks and a kill by Lazard.

Iowa State jumped out to a 14-2 lead in Set 2 with five blocks and three West putaways. TCU managed nine of the next 13 points, but that only reduced the margin to seven at 18-11. Three ISU errors and kills by four different players aided the rally. A pair of Harris aces made it 21-11, but TCU was back within seven as four players turned in kills. A West putaway and Conaway solo stuff put the Cyclones on the hill at 24-15. A Conaway kill three points later capped the 25-17 victory.

TCU scored five of the first eight points in Set 3 with three kills and two ISU errors. The Cyclones turned the tables with a 13-4 run, vaulting ahead 16-9. Seven straight points, including two conaway kills and two Hillegas aces, kicked off the stretch. Three Frog miscues and a Lazard ace put Iowa State up 16-9. Later a 4-0 run, including two Lamprini Konstantinidou aces, pulled TCU within four at 20-16. West helped seal the sweep with a kill and two blocks in a final 5-0 run.

Grace Lazard led the Cyclone block with eight blocks (one solo, seven assists), while Alexis Conaway had five (three solos, two assists). In the attack, Conaway and Samara West each had nine kills, with West getting hers at a .692 hitting clip.

First Set: Iowa State 25 TCU 14
Iowa State went on a 7-0 run to speed ahead 11-3, with ISU converting six of its first nine shots for kills. The Frogs went on a 5-1 run to get back into contention for the set, but the Cyclones dominated across the net. Along with hitting .522 for the set, the ISU block and back row restricted TCU to a -.036 hitting clip. Iowa State wrapped up the first set when Ashleigh Martin was stuffed by Monique Harris and Grace Lazard for ISU’s fourth block of the set at 25-14.

Second Set: Iowa State 25 TCU 17
The Cyclones block continued to dominate, as Iowa State recorded 5.5 blocks en route to taking an 11-1 lead. The large advantage allowed ISU to get some other players some time, moving to the 6-2 offense and getting Meegan Hart some time at middle blocker. Despite all the changes, the Cyclone defense still held TCU to a -.032 hitting percentage on the set. ISU wrapped up the second with an Alexis Conaway kill at 25-17.

Third Set: Iowa State 25 TCU 16
TCU had an early share of the lead for the first time all day, but the Cyclones went on a 7-0 run to pull ahead to a 10-5 lead that was not relinquished. The ISU serve had its best set of the season, as the Cyclones fired four aces in the frame, three via Hali Hillegas. ISU wrapped up the match with another block, as Samara West and Lazard teamed to deny Martin and send the Cyclones home victorious.

Player of the Game
Grace Lazard. The Iowa State block was dominant again, and the junior from London was the headliner for a second-straight match. Lazard finished the match with eight blocks (one solo, seven assists), and also contributed six kills and two aces to the Cyclone attack.

Up Next
Iowa State returns to action on Wednesday at Kansas State. First serve between the Cyclones and Wildcats from Ahearn Field House will be at 8 p.m. with ESPNU televising the match.

The Horned Frogs (9-11, 1-7 Big 12) struggled offensively in the match as the Cyclones 14-4, 5-3 Big 12) used early runs to establish a lead in every set and never look back as they took the match in straight sets.

Abigail Buckingham led the offensive charge for TCU with nine kills in the match while Sarah Langs contributed four kills. Kaylee Smith and Lamprini Konstantinidou dished out 10 and 9 assists, respectively. From the back row, Dani Dennison led the team for the 19th time this season with nine digs in the match.

Quotes of the Match
TCU Director of Volleyball Jill Kramer
“Iowa State played a very good match today. The most glaring thing for me was their serving. They served really tough and we needed to prepare our team better for that. We had a new lineup going today and we were trying to get into a rhythm with that and that makes it a lot more tough when you have a team serving bullets at you. It took a little bit for us to get in a rhythm every once in awhile which we did at times and it for sure does not look like it on the stat line and it does not look like it in the score. There were some bright spots for our team today and definitely ones we can build off of going into the second round.”

Up Next
TCU will start the second half of Big 12 play by heading back home to the friendly confines of The Rickel and welcome West Virginia on Thursday, Oct. 26 at 7 p.m.