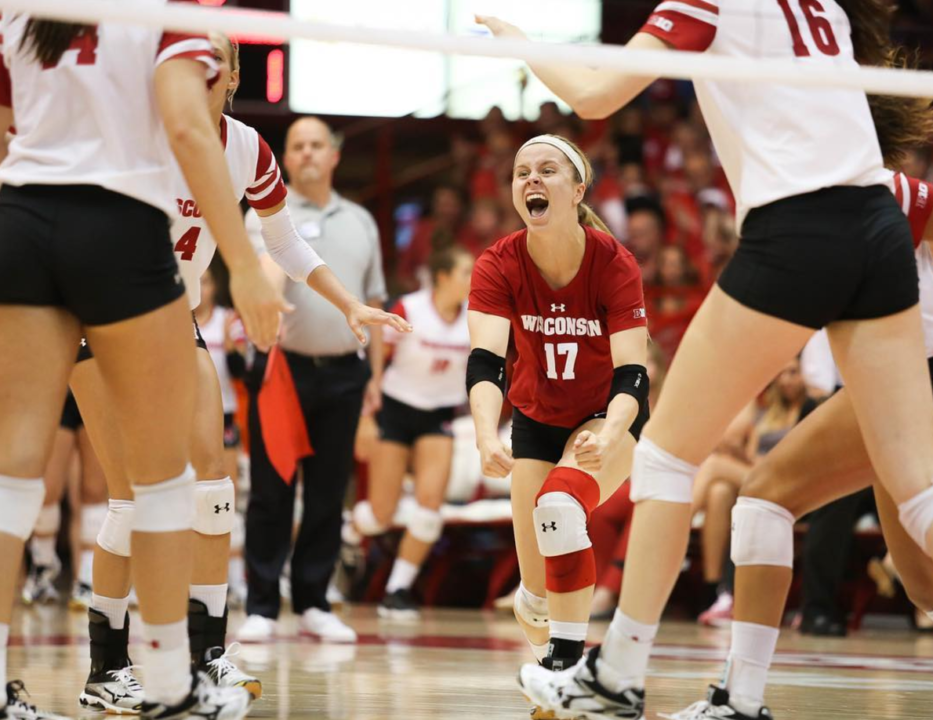 The #12 Wisconsin Badgers with an easy contest at Maryland, downing the Terrapins in straight sets.  Current Photo via Wisconsin Athletics

The #12 Wisconsin Badgers with an easy contest at Maryland, downing the Terrapins in straight sets. The win for the Badgers also featured a momentous night for head coach, Kelly Sheffield as he now has won 400 career matches.

The Badgers started off the match on a 3-0 run with kills from Lauryn Gillis and Madison Duello along with an Erika Pritchard attacking error. A Wisconsin serving error gave the Terrapins their first point up on the board. Wisconsin continued to build on their early lead to go up 19-11 late. Maryland tried to chip away at points but the deficit was too much to handle, dropping the first 25-16.

The Terrapins kept things close early in the second, even leading by a point at times. With the score at 5-5, the Badgers went on a 3-0 run on a Maryland service error, bad set call on Abigail Bentz and a kill from Kelli Bates. The Terrapins fought back and took the lead on a 5-0 run of their own including a kill from Hailey Murray, two service aces, a Murray/Pritchard block and a Badger attacking error to go ahead 11-9. Small runs from Wisconsin brought them back into the match, regaining the lead at 16-14. Each team went on mini-runs until the Badgers pulled ahead with a 5-1 run late that included kills from Tionna Williams, a Tiffany Clark service ace, two Gillis kills and a Maryland hitting error that ended the set 25-20.

The final set kept things tight early on before Wisconsin pulled ahead on runs to make it a 14-9 game mid-set. They continued to pull ahead throughout the set to a 20-14 lead. A back and forth point battle ended the match with a Dana Rettke kill and Maryland hitting error concluding the match 25-19.

In the match, the Badgers held their opponent to a low .069 hitting clip while hitting .389 on the night.

For the Badgers, Rettke led the front with 14 kills and four blocks on a .632 hitting clip. Gillis, Bates and Williams each contributed eight kills in the win. Setter Sydney Hilley produced her sixth double-double with 36 assists and 10 digs in the win while Clark picked up 11 digs in the backcourt.

Pritchard ran the show for Maryland with 10 kills while Samantha Drechsel and Samantha Burgio each picked up nine digs in the loss.

The ninth-ranked Wisconsin Volleyball team took care of business on the road Wednesday night to give head coach Kelly Sheffield his 400th career win. The Badgers swept Maryland, 25-16, 25-20, 25-19, at the XFINITY Center.

Setter Sydney Hilley earned her sixth double-double of the season with 36 assists and 10 digs. Libero Tiffany Clark had a match-high 11 digs to give UW a 41-32 advantage in the backcourt.

The Badgers recorded six stuffs to Maryland’s five as Rettke led the way with five blocks.

Quotable
“You pile up those wins, that means that you’ve had the opportunity to coach a lot of special people. Those things certainly mean more than the number of wins you might have.

“We’re a team that has an awful lot of people and a different player on a different night is going to step up. That’s kind of who we are and I think it’s our strength. Tonight the middles got going and Madison “Smooth Jazz” Duello had a really high offensive night. At the end of the day you look at the kill column and it’s pretty balanced all the way across.”

Up next
The Badgers end their week on the road at No. 5 Minnesota Saturday. The match begins at 7:30 p.m. and will air live on Big Ten Network.

“I think we made too many errors against a good team tonight,” head coach Steve Aird said. “We have a lot of young kids on the court, and we have to work on limiting our mistakes. There’s no off nights in the Big Ten, so we have to be ready to go against another top-10 program this weekend.”

Senior middle blocker Hailey Murray led Maryland with four blocks. Freshmen Samantha Burgio and Samantha Drechsel tied for the team lead with nine digs each. Burgio made her third appearance at libero. Drechsel made her first appearance at outside hitter while Pritchard slotted into the lineup on the right side.

Wisconsin began the match ahead 8-3 before a Murray-Gia Milana block helped Maryland pull within four, 11-7. A 5-1 Badger run put the visiting team ahead 19-11. Milana had a service ace and Pritchard knocked down a pair of late kills, but Wisconsin finished the set on a 3-1 run, 25-16.

After another early lead for the Badgers, Maryland went off on a 5-0 run, including two aces from Samantha Snyder, to take an 11-9 lead. The teams traded points before three straight gave Wisconsin a 19-15 advantage. Gia Milana had two kills and Angel Gaskin and Murray combined for a stuff as Maryland stayed within one, 20-19. A 5-1 run closed the set for the Badgers.

Murray had two early kills as the teams tied 8-8 to start the third. Wisconsin stifled Maryland’s momentum as the Badgers used a 9-2 run to go up 17-10. Pritchard had three kills to the second half of the game but Wisconsin was able to close the set, 25-19

The Terps host No. 10 Michigan State on Saturday at 5:30 p.m. Maryland fell to the Spartans in three sets earlier this season. The teams will compete on the XFINITY Center main court before the Maryland basketball programs host Maryland Madness. Admission is free on Saturday.