Minnesota Picks Up 12th Sweep Of Season Over Ohio State 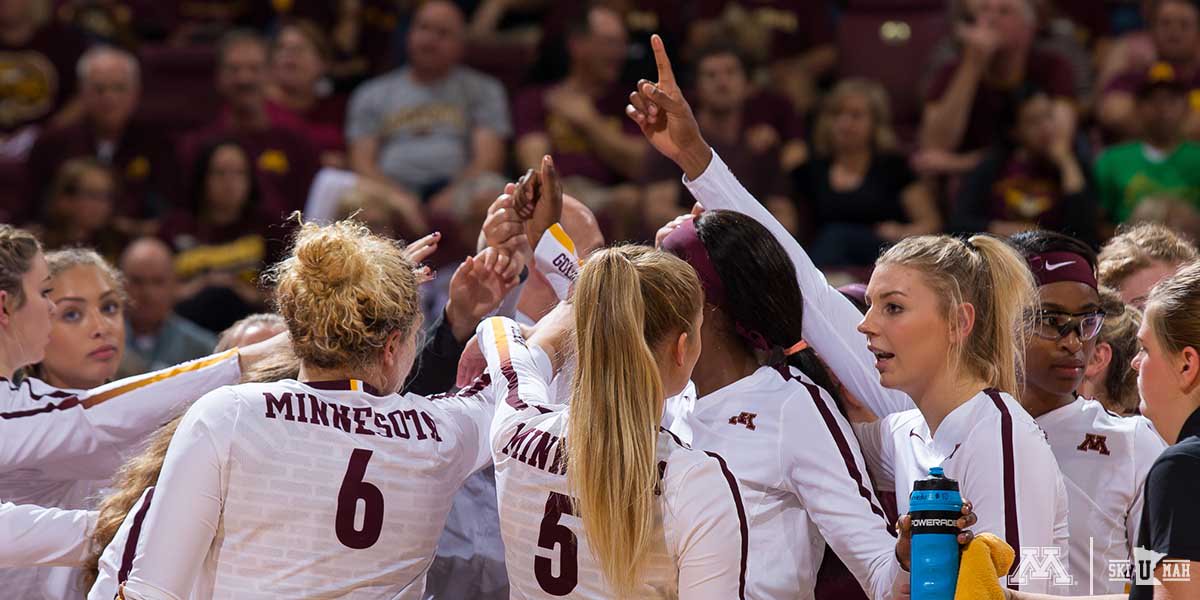 The #3 Minnesota Gophers took down Ohio State in straight sets to collect their 12th sweep of the season.  Current Photo via Minnesota Athletics

The #3 Minnesota Gophers took down Ohio State in straight sets to collect their 12th sweep of the season.

The first set saw the Gophers take a large 12-2 lead over the Buckeyes, with them continuing this charge at 17-4 and again at 23-8. The Buckeyes battled back, going on a 5-0 run to make it a 23-13 first set but the Gophers allowed just two more points for Ohio State before taking the first off two kills 25-15.

The second saw the teams bounce points back and forth until the score was tied at 10-10. The Gophers pulled ahead slightly to a 13-10 lead over the Buckeyes and forged ahead in their upward swing to a 17-11 lead. Ohio State tried to recover but could not catch back up dropping the second 25-20.

The final set once again saw a tight beginning with the score at 9-9 and Minnesota taking charge with a 3-0 run to go up 12-9. The Gophers built on their small lead to a 17-11 advantage until they claimed the set 15-18.

For Ohio State, Ashley Wenz led the losing fight with 10 kills and seven digs while Lauren Witte chipped in six blocks. In the back row, Hannah Gruensfelder picked up a match-best 21 digs while Bia Franklin added in another 10.

WATCH: Samantha Seliger-Swenson chat with BTN about this match, Minnesota's freshman, and life as a student athlete. pic.twitter.com/uAAnpb9SEP

As a team, the Gophers hit .274 and held OSU to .137. Minnesota produced 66 digs and 50 kills to win its fourth straight sweep. Stephanie Samedy had a match-best 16 kills, while Alexis Hart had 11 and Jasmyn Martin had nine. Regan Pittman had eight kills in 15 attempts and hit .467. Molly Lohman added five blocks, while Dalianliz Rosado had a team-best 18 digs. Samantha Seliger-Swenson had a double-double when she posted 42 assists and 16 digs.

Minnesota is back in action Sunday when it hosts Wisconsin, at 7:30 p.m. The match is sold out and televised live on the Big Ten Network.

Set Breakdown:
First Set: Minnesota opened up the match with an 8-2 lead and held the lead for the remainder of the set for a 25-15 win. With the Gophers opening the set at 8-2, Ohio State called a timeout. The Gophers, however, poured on the pressure out of the timeout and later went up 12-2 off back-to-back kills from Martin. Minnesota continued to add the pressure as it took a 17-4 lead off a Pittman block as OSU, which forced OSU to call its second timeout. The Gophers later built a 23-8 lead off a Samedy kill. OSU battled back to cut the Gopher lead to 23-13, but Minnesota finished off the set with a pair of kills for a 1-0 lead.

Second Set: The Golden Gophers earned a 25-20 second set win. The two teams traded points through 10-10 before Minnesota went up three, 13-10, off an OSU attack error and two Minnesota kills. The three-point swing forced OSU to call a timeout. The Gophers, however, continued to add to their lead for 17-11 cushion as the Buckeyes called their second timeout. A Lohman kill later pushed the lead to 19-13 and later 21-16 off a Hart ace. The Gophers took a 2-0 lead when Pittman finished off the set on her seventh kill of the night.

Third Set: Minnesota hit .405 in the deciding set to win, 25-18. The Gophers forced OSU to call an early timeout as Martin added back-to-back kills for a 6-3 lead. The Buckeyes tied the set at 9-9, but Minnesota went on a 3-0 run for a 12-9 lead. Minnesota pushed the lead to four on a Hart kill at 14-10, as OSU called its second timeout. The Gophers added to their lead for a 17-11 advantage off a Martin/Pittman block. Seliger-Swenson added a kill of her own at 19-14, while a Samedy kill pushed the lead to 22-16. A Lohman kill pushed it to match point, while Samedy added the last kill of the match for a 3-0 sweep.

Ashley Wenz led the offensive attack for the fourth straight match thanks to 10 kills and paired it with seven digs. Taylor Hughes chipped in 24 assists and Luisa Schirmer tallied nine kills. On defense, Hannah Gruensfelder collected a match-high 21 digs and Ana Beatriz Franklin had 10. Lauren Witte came up with six blocks, including two solo rejections, while four other Buckeyes had two blocks apiece.

SET 1: Minnesota quickly went ahead 17-4 to start the match. The Buckeyes tried to get back in the swing of things with a 7-2 run to extend the rally but came up short, 25-15.

SET 2: Wenz hit .455 in the second set with six kills on 11 attempts and one error. The two teams tied the score eight times before the Gophers went up 17-11. A pair of Minnesota errors and a Wenz kill cut the deficit to three, 19-16. Unfortunately, the visitors pulled away for a 25-20 win.

SET 3: A Hughes-Witte block tied the third at 9-all. Minnesota reclaimed the lead, 14-10, to force an OSU timeout. Back on the floor, the Gophers continued to build on their advantage to take the set, 25-18.

The Buckeyes are back in action on Sunday, Oct. 22 against Michigan. The match will be live on ESPNU at 1 p.m. ET.