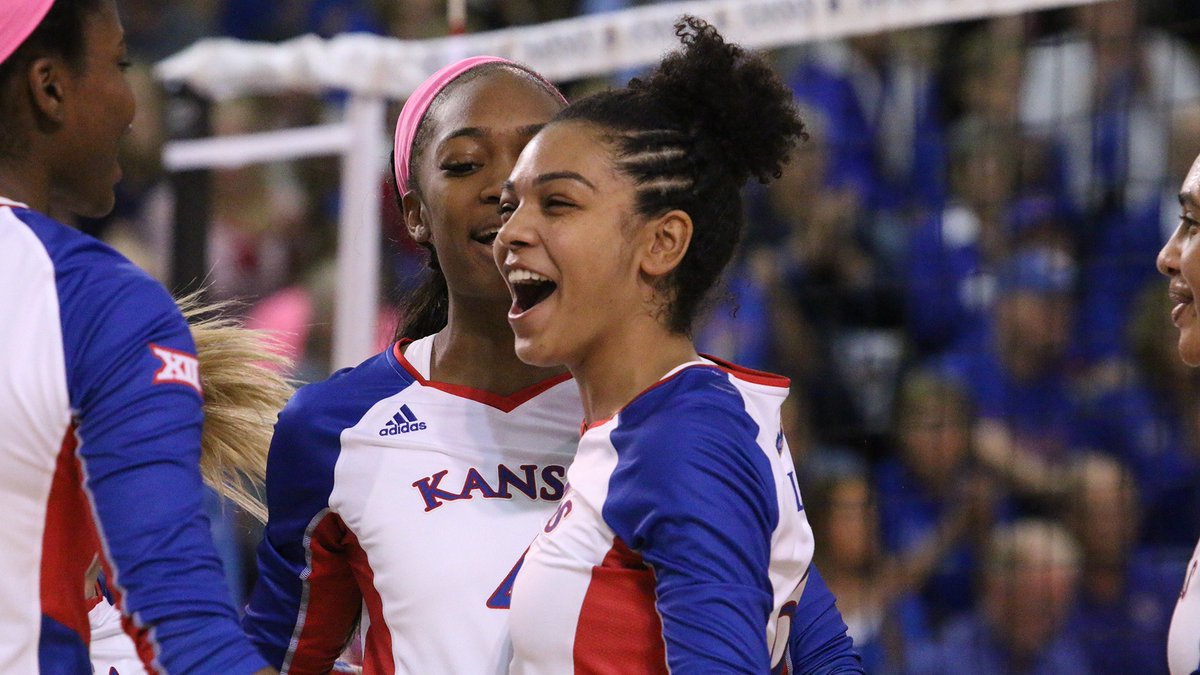 The #9 Kansas Jayhawks defeated the #17 Baylor Bears in straight sets Wednesday night, marking the team’s record-setting fourth victory this season over a ranked opponent. The Jayhawks had previously beaten Kentucky, Purdue and Iowa State, ranked #13, #17 and #18 respectively at the time by the AVCA.

Against Baylor, the Jayhawk defense came up strong, recording 11.5 total blocks and 55 team digs to keep the Bears, who came into the match leading the Big 12 in kills-per-set, to a .088 hitting percentage.

“This was a great opportunity for us tonight,” Kansas head coach Ray Bechard said. “To control the momentum on the road against a ranked opponent by the way we defended was crucial.”

The Jayhawks won set one 25-14 on Rigdon’s ninth kill of the frame, marking the second-straight set in which she recorded that number. A week earlier, she had notched nine in the team’s fifth set against Texas. In the seconds set, Baylor jumped to a 6-2 lead, but the Jayhawks responded and scored four of the frame’s five final points to win 25-22. The third frame was all Kansas, with the Jayhawks sprinting to a 5-0 lead to start the set and never looking back on their way to a 25-14 win.

Kansas hosts Texas Tech on Saturday afternoon, while Baylor doesn’t play again until next Wednesday, when they travel to Lubbock, Texas to also play Texas Tech.

Kansas (17-3, 6-1 Big 12) held the Big 12’s most productive offense to a .088 hitting percentage with 11.5 blocks and 55 digs to earn a program-record fourth victory over a top-25 opponent this season. Baylor entered Wednesday as the league leader in kills per set.

“This was a great opportunity for us tonight,” Kansas head coach Ray Bechard said. “To control the momentum on the road against a ranked opponent by the way we defended was crucial. We had a week since a very, very disappointing loss to No. 5 Texas — you never know how your team is going to respond after a match like that. It was evident from the get-go that we were up to the challenge tonight.”

Kansas held Baylor to its lowest hitting percentage of the season (.088), while on the offensive end recording an attacking clip over .300 for the fourth time during Big 12 play this season.

Kansas set a season high for digs in a three-set match, out-digging BU, 55 to 43.

“We slowed Baylor down with one of our better defensive efforts of the season,” Bechard continued. “I thought we put the ball where we wanted to, and that started with Ainise and Madison.”

Rigdon started fast and furious with nine kills in a 25-14 first-set win. Fittingly, Rigdon registered her ninth kill of the first set on set-point, needing just 12 errorless swings to reach that number. It was Rigdon’s second-straight nine-kill set after posting nine in the fifth set against Texas last Wednesday, Oct. 11.

“Welcome to the Madison Rigdon show,” Bechard glowed. “Ainise was getting the ball to her in good situations — Madison got some kills in the back row and mixed up her shots quite a bit. She just goes hard. She is a great example of what it is to be all-in all the time, as well as being a great teammate and a great competitor.”

Kansas responded to an early 6-2 Baylor lead in the second set by stringing together a 6-2 run of its own to tie the set at eight apiece. Sophomore outside hitter Jada Burse led KU with five second-set kills. The Jayhawks withstood seven ties before breaking a 21-all score to end the second set on a 4-1 run and winning 25-22.

Havili needed just two sets to record her 60th career double-double, going into the third set with 24 assists and 12 digs.

Kansas controlled the third set from start to finish with a .444 hitting percentage and an 84 percent side-out rate. The Jayhawks began the final set with a 5-0 run, powered by a two blocks and a kill by Hill, forcing a Baylor timeout. KU kept the pressure on BU throughout and concluded the match with an 11-point scoring margin in the third set, 25-14.

The Bears fall to 16-5 overall and 6-2 in league play after its nine-match home winning streak came to an end at the hands of the Jayhawks. The Big 12 leader in kills per set, Katie Staiger, was held to eight kills on a -.034 hitting percentage. Aniah Philo and Jana Brusek led BU with 12 digs each.

After defeating Baylor for the ninth-straight time, KU leads the all-time series with BU, 24-22. Wednesday was the first-ever top-25 matchup between Kansas and Baylor.

KU’s program-record four top-25 victories this season includes wins over No. 13 Kentucky, No. 17 Purdue, No. 18 Iowa State and No. 24 Baylor. The Jayhawks are 4-2 against top-25 opponents this season.

UP NEXT
Kansas returns to Lawrence to play host to Texas Tech on Saturday afternoon (1 p.m., JTV/ESPN3).

#24 VOLLEYBALL BLANKED BY NO. 11 KANSAS
Bears Unable To Slow Down The Jayhawk Offense In Wednesday’s Dig Pink Match.

Snapping a nine-game home winning streak and four-match winning streak, the Bears were unable to get going offensively, hitting .088 as a team. Junior Aniah Philo led the charge with a team-high nine kills and chipped in 12 digs for the near double-double. Katie Staiger added eight, and Yossiana Pressley had seven.

Baylor is only the second team to deny the Jayhawks a service ace this season as BU gave up zero Wednesday night.

BU forced two early hitting errors to go up 2-0 in the opening set, but the lead would soon get away from the Bears as the team had nine kills but eight attack errors (.029) to fall 25-14 and give KU the early advantage.

Baylor came out fast in the second frame as a Shelly Fanning kill put the Bears up 6-2. After losing the lead at the media timeout, BU tied it up at 21-21 after a Pressley kill before the Jayhawks closed out the set on a 4-1 run.

The Bears were forced to burn an early timeout after Kansas jumped out to the 5-0 lead in the third set. BU couldn’t get any closer to four points as an .061 attack efficiency helped lead Kansas to the sweep.

HIGHLIGHTS
• Aniah Philo led the Bears with nine kills and 12 digs.
• Jana Brusek recorded her 1,500th career dig as she totaled 12 against the Jayhawks.
• The Bears limited Kansas to zero service aces in the match. It was the first time since Illinois State on Aug. 26 that BU did not give up an ace.
• Hannah Lockin recorded 25 assists in the loss.
• Baylor now trails the all-time series, 24-22. The Bears still lead the series in Waco, 14-9.
• BU limited 2017 Preseason Big 12 Player of the Year Kelsie Payne to two kills on 18 attacks for a negative hitting percentage (-.056).

STAT OF THE MATCH
0 – the amount of service aces Baylor gave up to 11th-ranked Kansas.

TOP QUOTE
“I’m absolutely disappointed. We are so much better than what we did. Kansas is very, very sharp, so they didn’t give away anything or make it easy for us. It just wasn’t Baylor volleyball tonight. I think Aniah (Philo) showed a little fire. Tola (Itiola) came off (the bench) and did some good things, but offensively we were never in rhythm and we weren’t terminating very well. Defensively, if we slowed balls down we didn’t transition. We didn’t turn those into points.” –head coach Ryan McGuyre

WHAT’S NEXT
The Bears take a break this weekend and are back in action next Wednesday, Oct. 25 at Texas Tech in Lubbock. The match is slated for a 7 p.m. CT start.