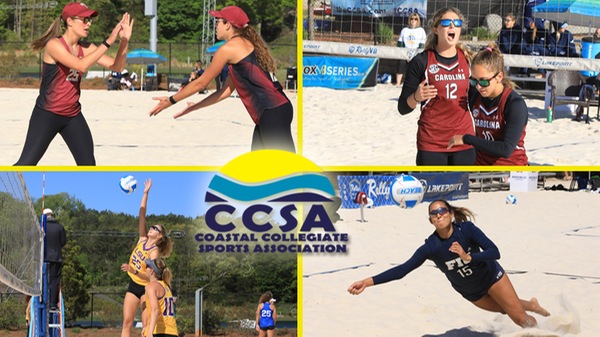 Pool A Recap:
No. 1 Florida State proved why they were the top seed as the Seminoles swept both of its opening day group matches. All five pairs swept the opening match against UNCW as the Seminoles won 5-0, before coming back later in the day and producing another 5-0 sweep. All-Conference selections Hailey Luke / Katie Horton won 21-10, 21-12 in the opening match, with No. 5 pair Francesca Goncalves /Eva Torruella putting a dominant display winning 21-6, 21-12. Against FAU in the second dual of the day, it was the No. 3 pair of Macy Jerger / Sara Putt that had the most convincing victory as they won 21-5, 21-15 in their match. Goncalves and Torruella were the only pair that needed three sets against the Owls, but they completed the sweep with a 15-11 win.

No. 4 LSU also sits at 2-0 after the opening day as the Tigers picked up a pair of nail-biting victories today. The first match of the day saw LSU take on No. 5 Georgia State. Courts 1 and 5 were straight-set victories for LSU, while the Panthers countered with straight-set victories on Courts 2 and 3. All the focus shifted to Court 4 where Emmy Allen and Megan Davenport won the first set 21-17, but dropped the second 22-24 to Amie Held and Katie Novack. In the deciding set, Allen and Davenport came through to win 15-10 and clinch the dual 3-2 in favor of LSU. In the second dual of the day, LSU earned a 3-2 win against UNCW as CCSA Pair of the Year, Claire Coppola and Kristen Nuss continued their fine form with a 21-16, 21-19 victory. LSU also secured wins on Court 2 and 5 to clinch the dual and move to 2-0 after day one.

No. 5 Georgia State bounced back with a thrilling 4-1 win against FAU to close out day one in Pool A. Four of the five matches were decided in three sets as neither side was willing to give any points away easily. The match came down to Courts 1 and 2, where Annika Van Gunst & Teegan Van Gunst secured a 15-11 win in the final set. Tiffany Creamer & Brooke Weiner earned a 17-15 win in the third set to help secure the match victory. FAU’s lone win in the dual came on Court 5, but they dropped to 0-2 on the day. Georgia State sits at 1-1 and will look to make a push tomorrow to qualify for Sunday’s semifinals.

Pool B Recap:
No. 2 South Carolina sits as one of two teams with a perfect 2-0 record in Pool B after day one. The Gamecocks, led by CCSA Coach of the Year Moritz Moritz, came out on fire in the first session of the day as they swept UAB 5-0. Four of the five matches were straight-set victories, while Carolina Skaff and Jess Vastine won 15-9 in the third set to comeback and pick up the victory. The second dual of the day was another tightly contested one as the Gamecocks emerged victorious 3-2 against Tulane. Cadie Bates and Katie Smith picked up a huge win, 21-17, 21-12, on court 1 to set the tone. Court 4 went in favor of the Gamecocks as well, but Tulane battled back to win matches on Court 3 and 5. The dual came down to Court 2 where Shannon Williams and Ali Denney lost the first set, but won the next two to give South Carolina the 3-2 victory.

No. 3 FIU showed why they will be a force to reckon with as the Panthers emerged with a 2-0 record after the opening day. The Panthers had a dominating performance in the first dual of the day as they won 5-0 against UAB. No. 1 pairing of Federica Frasca and Margherita Bianchin made quick work winning 21-13, 21-12 for the first point. Katie Friesen and Dorina Klinger clinched the dual with a 21-19, 21-16 win on Court 3. Courts 4 and 5 were won in three sets, which would be forshadowing for FIU’s after session. They took on Tulane in one of the thrillers of the day as four of the five matches went to three sets. Tulane’s Maddy Mertz collected her 100th career win for the Green Wave when her and Kaylie McHugh won in three sets on Court 1. Friesen and Klinger won in straight-sets to get FIU even in the dual at 1-1. FIU earned a win on Court 4, but Tulane struck back with a win on Court 5 sending players and spectators over to Court 2 for the final match in the dual. Lina Bernier and Erika Zembyla won the second set 27-25 to force a third, and came up big winning 15-13 to secure the dual.

College of Charleston picked up a dual match victory in Pool B as the Cougars won 3-2 against UAB. McKala Rhodes and Devon Rachel earned a win on Court 2, while All-Freshman team pick Logan Manusky won alongside Taylor Foley on Court 5. The deciding victory came on Court 4 where Allison Beckman and Lauren Freed picked up a three set victory, winning 15-9 in the deciding set to put the College of Charleston at 1-1 and in the hunt going into tomorrow’s action.