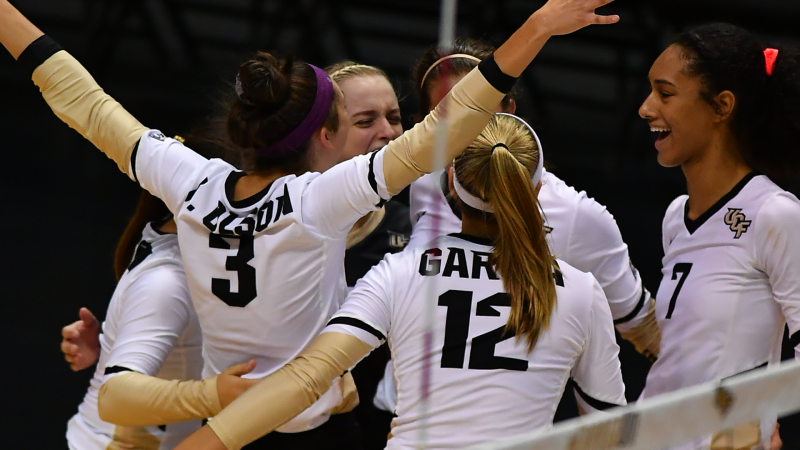 After handing No. 3 Florida a four-set home loss, No. 7 USC looked to be in the driver's seat for the Bubly Invitational title, but nobody told UCF that. The Knights posted their first win over a ranked foe since 2011, also a win over the Trojans. Current Photo via UCF Athletics

After handing No. 3 Florida a four-set home loss, No. 7 USC looked to be in the driver’s seat for the Bubly Invitational title, but nobody told UCF that.

The Knights, whose school has a history of surprising Power Five teams across sports, stepped to the plate and registered their first win over a ranked foe since 2011. Interestingly, that landmark win on Sept. 2, 2011, also came against the Trojans, as head coach Todd Dagenais led UCF to a sweep of then No. 3 USC, who was fresh off a Final Four appearance. Dagenias came to UCF in 2008 after three season as an assistant with the Trojans.

Meanwhile, back in the present, Florida bounced back with a four-set win over Louisville on Saturday.

Each team struggled in efficiency in one set. For the Trojans, that came in a .075 effort in Set 1 and for UCF it was a -.057 effort in Set 3. The Knights came through when it counted in the end, securing the victory with a .404 clip.

Brooke Botkin (19) and Khalia Lanier (18) came through for USC offensively. Botkin hit at a team-best .347 clip and added 12 digs and two aces, while Lanier also notched a doubled-double, registering 12 digs. Raquel Lazaro chimed in with 42 assists and 10 digs. The star defensively was Victoria Garrick, who posted 29 digs to go with three aces.

It Was Over When: After suffering through a 25-12 shellacking in Set 3, UCF slowly built a 10-7 lead in Set 4 behind three kills each by Kathryn Wesolich and Watson. USC rallied with four straight, with help from two Knight miscues and a Garrick ace, to go up 11-10. UCF took over from there with six of the next nine, including three Fisher putaways, to go ahead 17-14. The Trojans were within one four times, before finally tying the score at 22 on a Botkin ace, her fourth point in the run. Fisher and Lanier traded kills to bring it to 23-all. Briana Garcia and Melville issued the final blows in the upset.

🗣️ Coach is proud of the squad after this one ⚔️#ChargeOn pic.twitter.com/n6aHyuDSRf

Key Stats: Florida boasted the upper hand in every statistical category in the match, while hitting at a .267 or better clip throughout. The Gators outdid the Cardinals in kills (53-50), hitting efficiency (.291 to .203), blocks (10-8) and digs (43-38). Each team served up three aces. Twenty-four hitting errors, 16 service errors and three blocking miscues held the Cardinals back in the match.

Stat Leaders: Rookie Thayer Hall posted a team-leading kill tally for the third time in four matches for the Gators, notching 14 putaways to go with six digs and three blocks. Holly Carlton (13) and Taelor Kellum (10) also notched double-digit efforts. Kellum was the most efficient player on the team, hitting .833 with 10 errorless swings, while also putting up seven of the team’s stuffs.

It Was Over When: Louisville seemed primed to send the match to a decisive fifth set, jumping ahead 11-5 in Set 4 with help from three Gator errors and three Bennett putaways. Florida erased the deficit and tied the score at 13 with an 8-2 run, featuring five kills by Hall.  The Gators took their first lead of the stanza at 16-14 on a Paige Hammons kill. Louisville tied it up at 15, 16 and 17 before going up one at 18-17 on a McHenry termination. Down two at 20-18, Florida ran away with the set, closing it out on a 7-2 run. Two blocks and a kill by Kellum set up the final kill from Carlton.