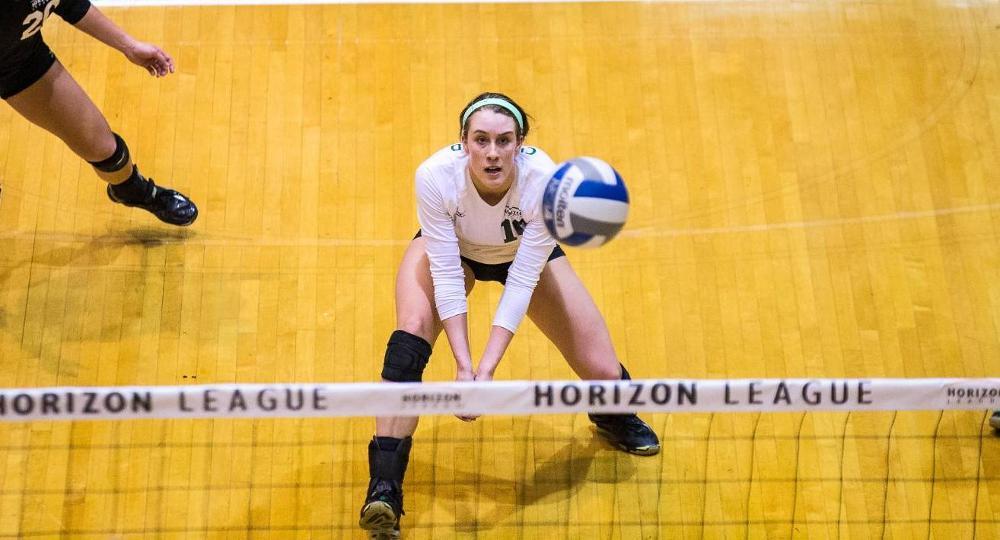 Senior right side Lauren Cloyd earned all-tournament honors after leading the team with a .310 hitting percentage and a total of 34 kills across three matches. The senior averaged 3.40 kills per set on the weekend.

Cloyd led the squad with a .700 hitting percentage, racking up 14 kills on 20 attempts and no errors. Fifth-year senior Mikaela Matthews posted a match-high seven blocks in the contest.

Cleveland State was led by Grace Kauth with 12 kills followed by Sara Skeens with 11 of her own. Gina Kilner contributed 35 assists in the win.

Although the score remained balanced at 7-7 to start set one, Cleveland State broke away to  a 18-12 edge en route to a win in the first. Moving into set two, Rutgers opened the frame with a 9-6 lead. However, CSU regained its momentum from the set before, tying the score up four times before reclaiming the lead at 16-15. After the Vikings grew their lead to 22-20, RU rattled off three consecutive points capped by a block by junior Meme Fletcher and sophomore Tiaja McKnight to give the Scarlet Knights a chance with the count matched at 22-22. However, CSU was able to hold off RU for a 2-0 advantage in the match.

The teams continued to trade points into the third set as Rutgers kept the score balanced, 8-8. From there, Cleveland State separated the margin to a 16-10 lead. The Scarlet Knights cut their deficit to as little as three on two occasions, but it is as close as they would come for the remainder of the match.

Temple was paced by Irem Asci with 11 kills, while Kyra Coundourides added in 30 assists.

Despite falling behind early in set one, the Scarlet Knights kept it a two-point deficit at 6-4. The Owls then jumped to an 11-4 lead, claiming control of the stanza the rest of the way. Temple never let up to take a 25-13 win in the first.

After TU carried its momentum into the second stanza on its way to a 2-0 lead in the match, Rutgers discovered a rhythm in the third frame. Although trailing in the count, the Scarlet Knights kept the margin as little as one as back-to-back blocks for the duo of Trimble and Matthews set the score at 6-5. The teams continued to trade points as the Owls kept an edge. RU picked away at the TU lead, holding the count at 17-15. However, the Scarlet Knights were unable to stay alive in the match, falling 25-18 in the final set.

UP NEXT
The Scarlet Knights open their home slate by hosting the Rutgers Invitational from Sept. 15-17. RU will welcome Princeton, Seattle and Seton Hall to the College Ave Gym for its final nonconference tournament of the season.

PHILADELPHIA, Pa. – For the third straight weekend the Cleveland State volleyball team has won its opening match, as the Vikings picked up a thrilling five-set win over Temple Friday evening. With the win, the Vikings are now 5-2 on the season.

Match Notes
· Cleveland State now owns a 2-0 record in five-set matches this season.
· Grace Kauth eclipsed the 20-kill mark for the second time this season (22 vs. Tennessee).
· Head coach Chuck Voss is now just four wins shy of reaching the 300-win milestone at Cleveland State.
· With her 11 digs, Grace Kauth now has 999 on her career, just one dig shy of becoming the 17th Viking all-time to record 1,000 career digs.
· Alexis Middlebrooks eclipsed the 250-block mark for her career Friday evening, ending the match with 252 total blocks.

The Match
After dropping the first set, Cleveland State was able to bounce back and even the match at 1-1 by picking up a 25-22 victory during the second frame. The two teams were evenly matched throughout the second set, as both teams traded points throughout the frame until Cleveland State was able to gain a 20-18 lead following a Grace Kauth and Aaliyah Slappy block. From this point on, the Vikings were able to control the set, closing out the frame with an Alexis Middlebrooks kill and Temple error.

The Vikings were then able to gain a 2-1 advantage in the contest with a matching 25-22 victory during the third set – which turned out to be another tightly contested frame. Once again the two teams traded points throughout the first part of the set, as the frame included 13 tie scores and six lead changes. Following suit from the second frame, the Vikings distanced themselves at the 20-18 mark with a block from Middlebrooks and Gina Kilner, and went on to hold the lead for the remainder of the set. Cleveland State closed out the frame by posting the final two points of the set, earning the victory on a Sydney Mast kill and another Temple error.

Although Temple was able to even the contest at 2-2 with a victory in the fourth set, Cleveland State came out swinging during the fifth and deciding frame, gaining a 10-5 advantage and never looking back. The Vikings gained the five-point lead on a Sara Skeenskill, and went on to earn five of the final eight points in the match. Cleveland State’s match-winner came from Kauth, as she tallied her 23rd kill of the contest to clinch the victory for the Vikings.

PHILADELPHIA, Pa. – The Cleveland State volleyball team captured its second tournament title of the season Saturday afternoon, as the Vikings picked up wins over Rutgers (3-0) and New Hampshire (3-1) to capture the Cherry & White Challenge title. The Vikings, who now stand at 7-2 this season, earned a victory over host Temple last night to post a perfect 3-0 record on the weekend.

Kauth led the Vikings with 51 total kills this weekend and 31 total digs, posting double-doubles against Temple (23 kills and 11 digs) and New Hampshire (16 kills and 16 digs).

Slappy finished the weekend with 20 kills and a team-best 15 total blocks – including an eight-block match against New Hampshire.

Match Notes
· With four digs against Rutgers, Grace Kauth eclipsed the 1,000-dig mark for her career, becoming the 17th Viking all-time to reach the milestone.
· Aaliyah Slappy recorded her 250th career block in the match, finishing the contest right on the number.
· With the win, head coach Chuck Voss now has 297 career wins, just three wins shy of recording his 300th win at Cleveland State.
· The Vikings are now 2-1 against teams from ‘Power Five’ conferences this season and 5-1 over the past two years.

Match Notes
· With her 16-kill performance against UNH, Grace Kauth cracked the top-10 kills list in the CSU Career Record book, as she finished the match ranked 10th with 1,177 career kills.
· Head coach Chuck Voss finished the match with 298 career victories at Cleveland State, needing just two more wins to reach the 300-win milestone.
· For the second time this season, Gina Kilner was just shy of recording a triple-double, finishing the match with nine kills, 48 assists and 12 digs.
· Freshman Jordan Verbiak notched her second double-digit dig match of the season with 12 digs against UNH.

UP NEXT
Cleveland State will close out the non-league portion of its schedule next weekend, taking part in the Hoosier Classic. The Vikings will face IUPUI, Arkansas State and host Indiana.