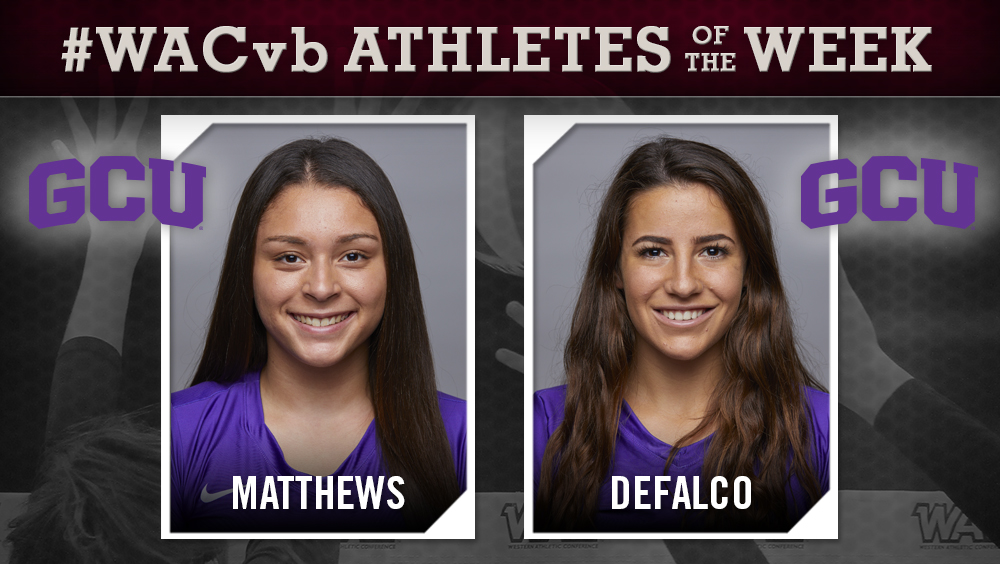 DENVER – Grand Canyon freshman outside hitter Kayla Matthews and sophomore defensive specialist Teagan DeFalco have been named the Western Athletic Conference Offensive and Defensive Volleyball Players of the Week, respectively, for the week of Oct. 8-14. This is the first-ever honor for both.

Matthews, a Phoenix native, averaged 5.00 points, 4.25 kills on .315 hitting and 0.38 service aces per set as the Lopes went 2-0 on the week. In a five-set win over CSU Bakersfield, she had a huge contest with 18 kills and three service aces. In the decisive fifth set, Matthews recorded three kills and an ace. The ace came as she was serving the final two points of the set in the 15-12 win. In the sweep of Chicago State, Matthews recorded her fourth double-double of the year with 16 kills and 11 digs, hitting at a .556 clip. She entered the week averaging 2.41 kills on .144 hitting and 0.27 service aces per set.

DeFalco, a Long Beach, Calif. native, led the WAC with 6.38 digs per set as the Lopes picked up their first WAC wins of the season. In the five-set win over second-place CSUB, DeFalco was all over the court with 29 digs against only one reception error. In the sweep of the Cougars, she had 22 digs, no reception errors and added three service aces. Her 6.38 digs per set average was nearly two more digs per set better than the 4.51 digs per set she was averaging entering the week.