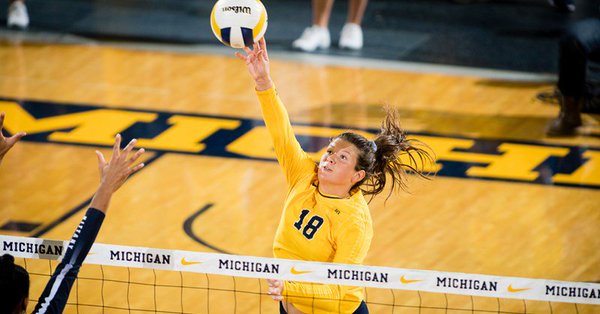 • Averaged 4.89 kills per set and hit for a .402 hitting percentage in wins against Ohio State and Maryland over the weekend

• Led No. 13 Michigan in kills against Ohio State (23) and Maryland (21), marking her second and third 20-kill efforts of the season

Congrats to Carly Skjodt on earning her second-straight Big Ten Player of the Week Award!

• Averaged 6.71 digs per set against Northwestern and No. 7 Illinois

• Aided the No. 8 Badgers to a .404 team hitting percentage against the Wildcats in a 3-0 sweep

• Recorded a career-high 26 digs versus the Illini

Can you dig it? @BadgerVB's Tiffany Clark has earned her first B1G Defensive Player of the Week!

• Led No. 3 Minnesota to sweeps against No. 7 Illinois and Northwestern averaging 13.50 assists per set and helped the Gophers to a .307 hitting clip for the weekend

• Against the Illini, the senior recorded three aces and 41 assists as the Gophers hit .270

• Versus the Wildcats, produced 40 assists and an ace as the Gophers hit .345 and became the only setter in all NCAA divisions to hold over 5,000 career assists

•  Averaged 5.00 digs per set in a pair of wins over No. 7 Illinois and Northwestern

• Tied a match-best 14 digs against the Illini on Friday

• Versus Northwestern, added a match-best 16 digs

• Against Purdue, led all hitters with 18 kills on a .271 clip and added eight digs, three blocks, three service aces, and two assists

• Versus Nebraska, added eight kills and seven digs, and chipped in four blocks

• Receives her second career Freshman of the Week honor

Jonni Parker picks up her second @B1GVolleyball Freshman of the Week honor!