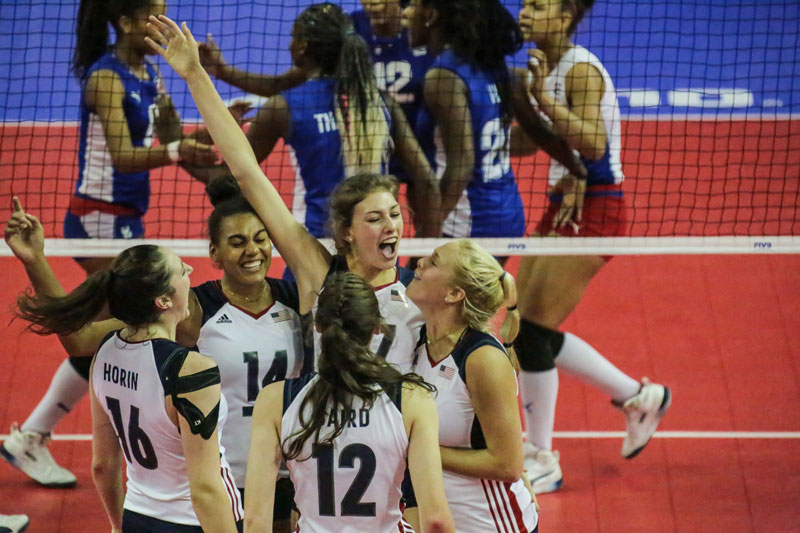 The United States Women's Junior National Team won a tight one with Cuba on day two of the U20 NORCECA Women's Championship. Archive Photo via NORCECA

In a match of nations looking to bounce back, Puerto Rico got the better of Guatemala. To the point of the match, it was also the first to not be a sweep, as Guatemala fought back in the third despite being dominated in the other three games. The attack was the biggest separating factor between the two, and the lack of balance hurt Guatemala. That balance was there for the Puerto Ricans, with three players reaching double figures and Ariana Pagan (12 points) scoring more than anyone else.

Puerto Rican captain Paulina Pérez: “Yesterday we played with different line-ups and our bench players did a good job, it turned out ok, it wasn’t the case today; my team wasn’t well organized and Guatemala was smart to push harder. We failed too many serves, but less than yesterday. During the delay we enjoyed ourselves dancing with the other teams, sport brings us together. Our good energy and team effort helped us today; we hope to do the same tomorrow against Cuba. We need to stabilize our passing.”

Guatemalan captain Carmen Elisa Gómez: “We are really excited; this is an historic moment for Guatemala because I think we have never won a set to a team that works harder than us, this proves that we can accomplish much more against big teams. Our coach said – let’s forget about the first two sets and just do what you can, give it all you got and not many are lucky to be here so take advantage of this opportunity. Our coach motivates us and helps us with the mental part of the game.”

The U.S. got its toughest test to this point and downed Cuba in five. That sets them up for a likely Pool A victory assuming they don’t trip up against 0-2 Guatemala. It was a game of runs with a 5-0 spurt from Team USA in the fifth enough to close things out. In total, the Americans scored a handful more of points off of serve and block, while Cuba had eight more kills. The first two contributed to Cuban mistakes though as they self-inflicted 13 more team errors. Once again leading the way for the red, white and blue was captain and future Longhorn Logan Eggleston (18 points), who helped overcome the strong performance from Ailama Cese Montalvo (20 points) of Cuba.

United States head coach Robert Cook: “We asked players to play in different positions as we thought was best and they did it, players doing different roles. It was a back and forth serving game the entire match. Our serves were pretty good in that fifth set. We were down big in the fourth and we made the change of setter and made a big comeback, so we decided to continue with Mia; I am happy for her performance in her first international tournament. It was quite a wild night.”

Cuba head coach Regla Torres: “My players feel bad, I not so much. United States has a very high game level; they are fast and really know how to play volleyball. And we have really young performers, this is their first international event, they have never been outside Cuba. This is a really good preparation for what lies ahead. We aren’t prepared enough to be here, we didn’t have preparation games, it doesn’t matter how much you want to win if you don’t have the right conditions. I will talk to them, they must know that we haven’t lost yet, we wanted to be pool leaders, but what’s most important are the crossover matches, there is still possibilities and I will motivate them, hoping they won’t lose energy and what’s most important that they need to believe they can win.”

It’s a 2-0 start for the defending champions, and they have not skipped a beat yet in doing so. The highlight for them in this match was their serve which posted an 11-0 edge in aces. That dominance kept Honduras out of system too, as the Dominicans logged more than double the amount of kills (41-18). That was all spearheaded by the efforts of three double-digit scorers, namely Erika Isabel Asencio Soriano (seven kills, three aces, 10 points).

Dominican Republic head coach Wagner Pacheco: “It was hard to get in rhythm because of the technical delays during the match; but our mind was always set on winning. My team took control with power at the net and performed well, we are improving with each match. We finish pool-play against Mexico tomorrow, it’s important to beat them and move directly into semifinals; we’ve determined our strategy based on what we’ve seen and we are aware it will be difficult with Mexico’s supporters.”

Honduras head coach Osiel Vásquez: “Both teams lost concentration because of the technical delays and they didn’t perform well. I consider that my team can do much better, I am not happy but I knew Dominican Republic was going to win. Our goal is to beat Costa Rica tomorrow, they are from our zone and we must study them tonight against Mexico.”

Through two matches, Mexico has absolutely dominated their competition and held the opponent to single-digits in half of their sets played. That’s music to the ears of the home crowd, who will now look to give their nation an edge against Dominican Republic in the winner-take-Pool-B-match. For Costa Rica, they have a match with Honduras that will keep a team out of the winners bracket. They’ll need to find more rythym after the Mexican defense held all of their players to six or less points while Mexico will look to keep humming behind the strengths of Melanie Guadalupe Parra Quintero (12 points), Uxue Amaya Guereca Parra (11 points) and company.

Mexico libero Joseline Landeros: “We were strong and consistent, our game lever was superior. I believe that our serves were our best feature in the second set; it was directed in a way that Costa Rica had no possibilities to react. Against Dominican Republic we are planning to give our best; they are stronger and taller than us, but we have to be intelligent.”

Costa Rica head coach Andrés López: “We expected to do better, it was a good first set, we fought strong in the third, but I tried to transmit to my team that Mexico is similar to us physically speaking, in height too, but it was shown that they are more competitive than us. My girls are really good in our national league and Mexico dominated us with serves. Costa Rica should be able to compete neck to neck with Mexico but we need to improve our league or our preparation, have more preparation matches for these events. Yesterday against Dominican Republic we had one good set because we are growing along the way, but we need to play more against these competitive teams to improve. My experienced players came off short but it’s part because our inexperience at international level.”