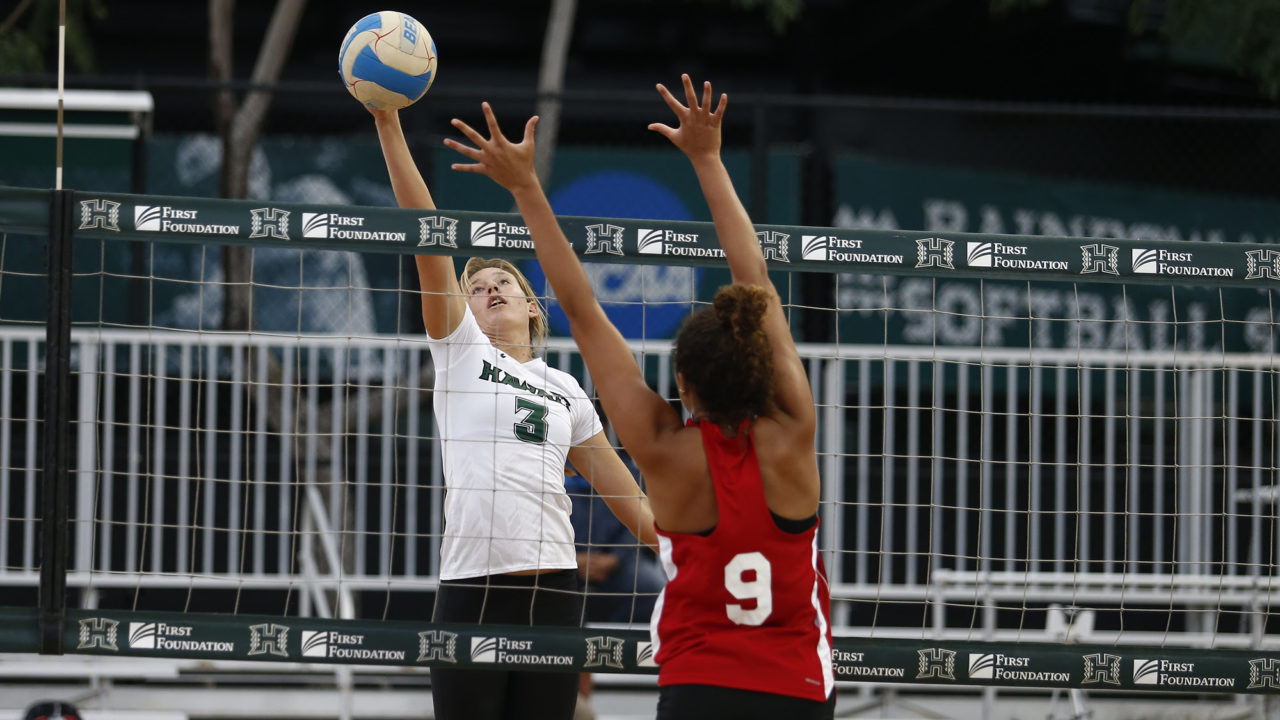 The No. 3 University of Hawaii beach volleyball team continued its roll with a 4-1 win over Nebraska Tuesday at the T.C. Ching Complex Courts.  Current Photo via Hawaii Athletics

The No. 3 University of Hawaii beach volleyball team continued its roll with a 4-1 win over Nebraska Tuesday at the T.C. Ching Complex Courts. The Rainbow Wahine improved to 14-3 on the season with their ninth straight win.

It was the third win over Nebraska in four days for the Rainbow Wahine, who also picked up a pair of 5-0 wins over the Huskers (3-12) in the Outrigger Hotels Hawaii Invitational this past weekend. UH’s nine straight dual match wins is tied for the third-longest in program history.

Meanwhile, another milestone was reached on the evening when Kaiwi Schucht surpassed Nikki Taylor as the program’s all-time leader in dual match wins with 74 wins. The senior reached the mark after teaming up with Emily Maglio for a 21-6, 19-21, 15-12 win over Kelly Hunter and Lauren Stivrins at the No. 1 flight to cap the dual match.

UH did drop their first point against the Huskers in the three meetings when Annika Albrecht and Kenzie Maloney rallied past Carly Kan and Laurel Weaver at the No. 2 flight. However, the Rainbow Wahine won the other three other courts in dominating fashion. Ari Homayun and Amy Ozee were particularly impressive. The pair scored 13 straight points bridging the first and second sets, including the final nine points in Set 1, during a 21-9, 21-8 blitz of Hayley Densberger and Chesney McClellan.

UH got straight sets wins at then No. 3 pair of Chloe Luyties and Morgan Martin, as well as the No. 5 pair of Paige Dreeuws and Hannah Zalopany. With the dual match victory, UH remained a perfect 9-0 all-time against the Huskers.

The SandBows will now hit the road for nine straight matches on  the mainland, starting with the Gamecock Challenge in Columbia, S.C., March 24-25.