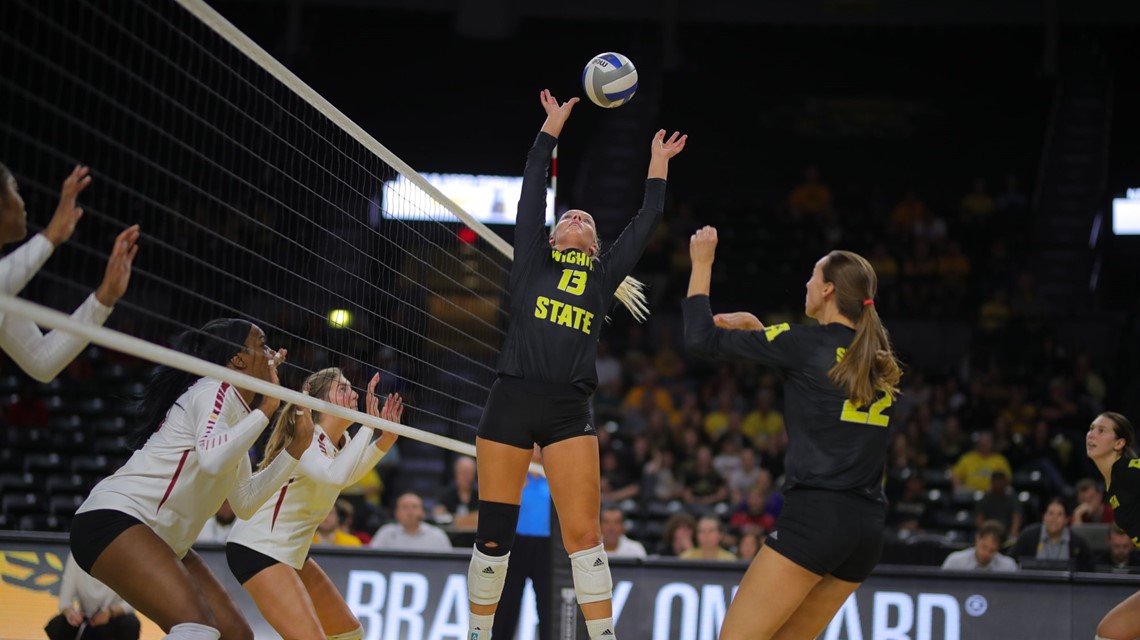 Senior setter Emily Hiebert had 37 assists and seven digs, including the 1,000th of her career, as Wichita State defeated Houston in straight sets. Current Photo via Wichita State Athletics

Wichita State (RV) made short work of the Houston Cougars in an afternoon tilt that saw Shocker setter Emily Hiebert record the 1,000th dig of her career.

In addition to her defensive milestone, the senior also dished out 37 assists. Other key contributions for the Shockers came from senior middle Abbie Lehman, who led the visitors with 16 kills and five blocks, and junior outside Tabitha Brown, who registered a double-double (15 kills, 15 digs).  Freshman libero Giorgia Civita paced back-row defense with 15 digs.

For the Cougars, sophomore outside Megan Duncan led the host school with a team-high six kills, the seventh time this season she has led Houston in that category. Defensively, sophomore libero Katie Karbo recorded 13 digs.

Wichita State controlled the first set and reached set point on a double block by senior outside Mikaela Raudsepp and freshman middle Emma Wright. A kill by Brown gave them the frame 25-14.

In the second, senior libero Gabi Mostrom served 12 straight to create separation and the Shockers followed that scoring rampage with another 14-1 run to record a decisive 25-8 victory.

The third frame was all Wichita State as well, with the Shockers sealing the victory on Brown’s 15th kill of the afternoon.

Wichita State returns home to host SMU on Friday, while Houston welcomes Cincinnati to their home arena, also on Friday.

Abbie Lehman led the Shockers with 16 kills and five blocks, while Tabitha Brown had 15 kills and 15 digs. Emily Hiebert had 37 assists and Giorgia Civita had 15 digs.

SET 1:
• The Shockers ran away with a 25-14 win in the first set
• An Alex Koon kill gave the Shockers an early 6-3 lead
• Two-straight blocks from Abbie Lehman pushed the lead to 11-5 and forced Houston to use a timeout
• Three-straight Lehman kills gave WSU a 15-7 lead
• WSU reached set point at 24-12 on a block by Raudsepp and Wright and a Brown kill gave the Shockers the 25-14 win
• Abbie Lehman and Tabitha Brown each had six kills
• Emily Hiebert had 12 assists and Giorgia Civita had six digs

SET 3:
• WSU swept the match with a 25-18 win in the third set
• Four kills and two blocks gave the Shockers a quick 6-0 lead in the third set and led to a Houston timeout
• After WSU took a 7-0 lead, Houston answered with five-straight to cut the lead to 7-5
• Kills from Brown and Raudsepp gave WSU a 14-10 lead, but the Cougars pulled to within 15-14 after two-straight Shocker hitting errors
• Three kills and a block from Brown gave WSU a 20-15 lead and the Shockers won 25-18 on another Brown kill

NEXT MATCH:
• The Shockers are next in action on Fri., Oct. 13 when they host SMU at 7 p.m. inside Charles Koch Arena

With the decision, the Cougars fall to 6-8 on the season on 2-4 in American Athletic Conference play, while the Shockers improved to 14-3 overall and 6-0 in league action.

HOW IT HAPPENED
Set 1
Wichita State never trailed in taking the opening set 25-14.

Set 2
In the second set, the two teams traded points early, but the Shockers pulled away for a 25-8 victory to hold a 2-0 lead at intermission.

Set 3
Wichita State opened the third set with a 7-0 run, but Houston answered with a 8-2 run, highlighted by

a pair of kills from redshirt junior Chenelle Walker, to pull within one point at 9-8. The Cougars kept it close, trailing 16-15, until the Shockers closed the set on a 9-3 run to end the match in straight sets.

UP NEXT
The Cougars will continue play in The American with visits to Cincinnati on Oct. 13 and ECU on Oct. 15.