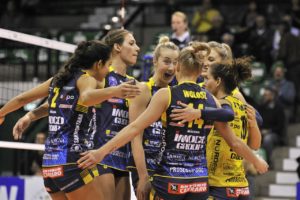 The 2018 CEV Men’s Champions League is in full swing, with the first half of the second being completed on October 18. All but one match during the “home match” phase were completed in straight set sweeps while Maccabi TEL-AVIV needed five sets to down Shakhtior Soligorsk.

The next portion of the second round of the competition is set to begin on October 22 with the team facing off in rematches at the other team’s venue. From there the team’s will play against team’s awaiting the finish of the second round in round three that will begin on November 11 and 12. The winners of those matches will move on to the fourth round where pool play action will begin in January.

ACH Volley had two players that led the squad in the victory, each posting 17 points on the night – Matej Mihajlovic and Jan Pokersnik. The two teams will have a rematch this coming Sunday to determine who will move on to the third round of the competition and play against Russia’s Lokomotiv Novosibirsk.

“I am happy that we made a step forward on our journey to the next round of the CEV Volleyball Champions Leauge. We somehow feel ready to play Lokomotiv Novosibirsk. I want to thank the home team for their kindness and hospitality,” said Zoran Kedacic, head coach of ACH Volley.

Pablo Guzman led the fight for Omonia in the sweep with 17 points on 16 kills while Mory Sidibe added another 11 points, all on kills.

The sweep was played in front of a crowd of more than 1,000 fans that came to cheer on Omonia and the Champions League rookies Jedinstvo Bemax. Moreover, the win coincided with Omonia’s first victory on the European stage, a historic feat for the Cypriot squad.

Maccabi started things off strong in the match with a 2-0 set advantage over Shakhtior. However, Shakhtior fought their way back into contention, winning the next two sets to force a fifth set. There were unable to keep the momentum going enough to win the match, dropping the fifth 16-14.

Maccabi’s Leonardo Do Santos Ribeiro Nascimento forged the way for the winning side with 32 points with 29 being kills. For the losing side, Andrei Radziuk posted 21 points with 20 being kills.

“It was drama. We started the game very well but we found ourselves with the back against the wall after the team from Belarus came back by winning the third and fourth sets. I am happy that we could regroup and win in the end. This is Maccabi’s historic first victory in the Champions League,” said head coach of Maccabi, Zohar Bar Netzer.

Stijn Van Schie was the top scorer in the sweep with 16 points including 10 kills, three aces and three blocks. Also contributing big numbers was Niels De Vries with 15 points on eight kills and seven blocks.

Abiant is the defending Dutch national champion and proved their dominance on the court with the strong sweep over KV Luboteni.