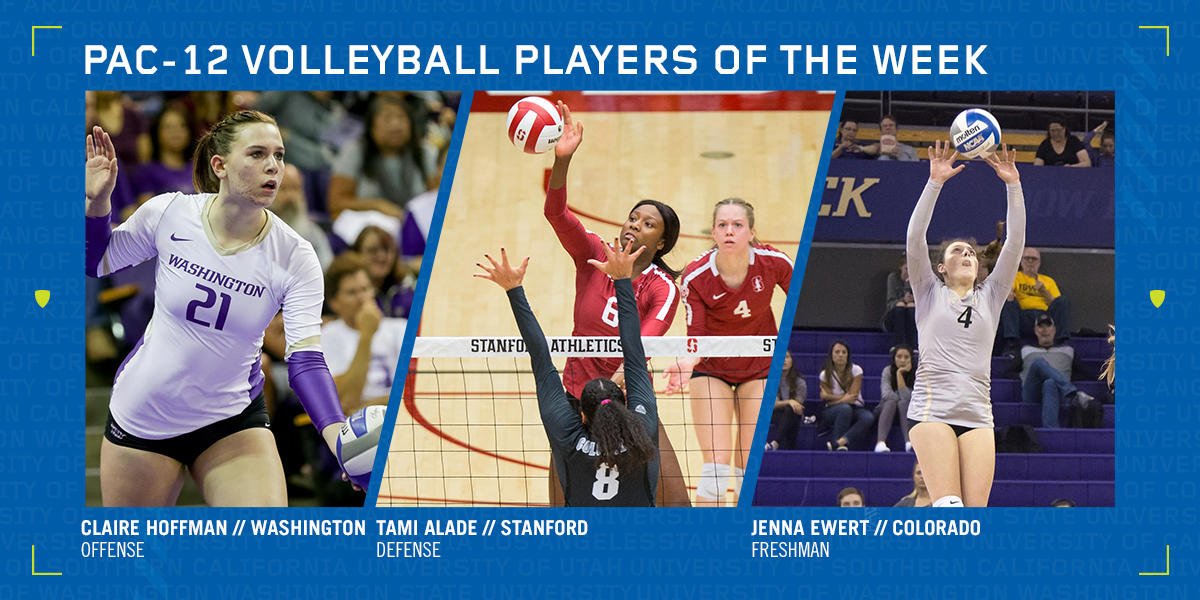 Claire Hoffman, FR, WASH (Pleasant Hill, Ore.)
3.75 KPS, .324 Pct., 4.4 PPS, 4 Aces
• Led the Huskies to their first 2-0 Pac-12 week since the opening week of Pac-12 play with 3-1 wins over Arizona State and No. 21 Arizona, averaging 3.75 kills per set and adding four aces.
• Appearing in just her fifth match of the season, she led UW to defeat the Wildcats with a season-high 21 kills, the most kills by a Washington freshman since 2011 Pac-12 Freshman of the Year Krista Vansant.
• Serving up four aces this weekend, she has served at least one in all five matches she’s played in this season.
• Becomes the first freshman to earn Pac-12 Offensive Player of the Week honors this season and marks the 65th all-time honor for the Huskies.

Claire is your Pac-12 Offensive Player of the Week! Her 2⃣1⃣ kills yesterday were most by a UW frosh since Krista Vansant in 2011! 💪

Tami Alade, SR, STAN (Sherwood Park, Alberta, Canada)
.588 Pct., 2.38 BPS, 2.6 PPS
• Averaged 2.38 blocks per set, hitting .588 in a pair of wins over Colorado (3-2) and Utah (3-0) to maintain Stanford’s undefeated Pac-12 record and helping it win its 20th-straight match, pushing its nation-best home-winning streak to 29.
• Set a school record in the rally-scoring era with a career-high 15 blocks against the Buffaloes while hitting a match-high .727.
• Leads the nation with 1.75 blocks per set after adding another four blocks in the sweep over the Utes.
• Marks her second-straight weekly honor and second of her career. Earns the 115th all-time weekly honor for the Cardinal.

Can’t get anything past @StanfordWVB’s Tami Alade. 😤

Jenna Ewert, FR, COLO (Antioch, Calif.)
10.88 APS, .333 Pct., 3.0 DPS
• Averaged 10.88 assists per set in a road sweep of California and a five-set road loss to No. 2 Stanford.
• Dished out 34 assists with six kills, nine digs and five blocks to help sweep the Bears.
• Helped CU force a fifth set after being down 0-2 against the Cardinal with a double-double of 53 assists and 15 digs.
• Marks her first weekly freshman honor and the fifth weekly freshman honor all-time for the Buffs.

Your Pac-12 Freshman of the Week! #GoBuffs pic.twitter.com/jpmoTNS2Mw