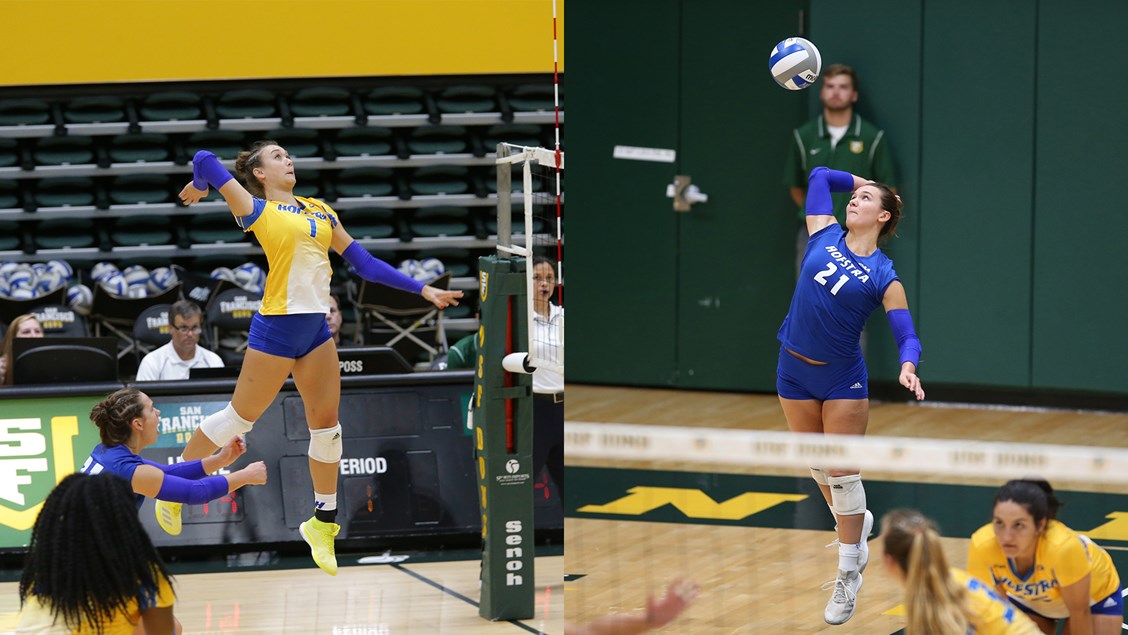 CO-OFFENSIVE PLAYER OF THE WEEK

Devon Rachel, Charleston
Senior | Outside Hitter | Louisville, Ky./Mercy Academy
Rachel swung her way into Charleston volleyball history on Friday, putting down a match-high 21 kills to set a new three-set single-match (25-point, rally scoring) record. The senior outside hitter recorded nine kills in each of the second and third sets – including the deciding point in each frame – while adding 15 digs to account for her sixth double-double of the season. Rachel also collected a pair of service aces. Through three CAA matches, Rachel ranks first in the conference in kills per set (5.56) and fourth in hitting percentage (.391)

Congratulations to senior Devon Rachel, who was named the @CAASports Co-Offensive Player of the Week today!

CO-OFFENSIVE PLAYER OF THE WEEK

Laura Masciullo, Hofstra
Junior | Outside Hitter | La Spezia, Italy/Liceo Scientifico San Lorenzo
It was another strong week for Masciullo as she led Hofstra to a perfect 3-0 week with three straight conference sweeps. Masciullo had a strong hitting percentage of .319 and added seven blocks and four digs. Masciullo got her outstanding week started with an 11-kill performance in a road sweep of Towson on Monday. She continued her great week on Friday as she posted 10 kills and four blocks in the sweep of Elon. In the Pride’s final match of the weekend, Masciullo tallied a team-best 11 kills and added two blocks and two digs in the sweep of William & Mary.

M’Kaela White, James Madison
Junior | Middle Blocker | Riverdale, Md./Parkdale
White continued her defensive prowess in James Madison’s lone match of week, helping the Dukes take a 3-1 decision against Towson. She led the Dukes with nine blocks and currently sits second in the league with 1.50 blocks per set against conference opponents. White also proved formidable on the offensive side, adding ten kills and a .400 hitting percentage to lift James Madison to a 4-0 start to CAA play.

M'Kaela White tacks on her second consecutive @CAASports Defensive Player of the Week honor after a stellar showing against Towson!https://t.co/Wwf4H7ZFkq

Maddie Appleton, Hofstra
Freshman | Libero | Milford, Mich./Milford
Appleton had another great week as she posted a team-best 37 digs, while also adding 10 assists (second on the team) and five service aces (led team). She averaged a robust 4.11 digs per set. In the road sweep of Towson, Appleton posted eight digs and added six assists and a service ace. She would follow that up with an outstanding match with 20 digs and three assists in the victory over Elon. In the Pride’s final match of the week, she notched nine digs and added four service aces.