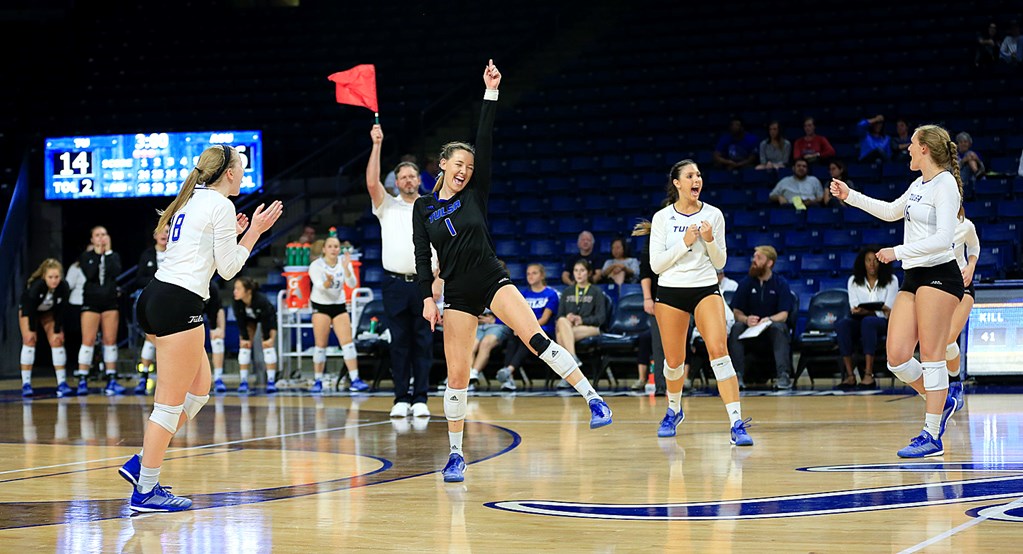 The American Athletic Conference has announced the winners of the league’s weekly volleyball honors for the week ending on September 30: Cincinnati's Maria Mallon and Tulsa's Taylor Horsfall. Current Photo via Tulsa Athletics

PROVIDENCE, R.I. – The American Athletic Conference has announced the winners of the league’s weekly volleyball honors for the week ending on September 30.

Mallon averaged an impressive .622 hitting percentage, reaching double-figure kills in two matches through a 2-0 weekend. The freshman outside hitter hit .722 on 18 attempts with 14 kills against SMU, before knocking down 12 kills and hitting .526 on 19 attempts against Houston. She added two blocks and six digs to her weekend performance. The Bearcats have won nine-straight sets through a 3-0 conference slate.

For the fifth week in a row a #Bearcats player has earned @American_VBall Offensive Player of the Week honors!

Horsfall played a key defensive role, as the Golden Hurricane fended off two opponents in a pair of five-set wins to maintain a 7-0 mark at the Reynolds Center this season. Averaging 6.60 digs per set, Horsfall had 39 digs and a .978 reception percentage against North Texas. On Saturday, she recorded 27 digs and a perfect reception percentage on 40 attempts in a stunning 3-2 win over Wichita State—ending the Shockers’ 22-match winning streak in conference play. Horsfall added 11 assists and three service aces through the week.

Averaging 6.60 digs per set and playing a key defensive role as the Golden Hurricane fended off two opponents in a pair of five-set wins, @TulsaVolleyball's Taylor Horsfall has been named the #AmericanVB Defensive Player of the Week!

Pingel averaged 4.86 digs per set to guide the Knights to another 2-0 weekend, extending their winning streak to nine-straight matches. She recorded 18 digs and nine assists in a 3-1 win over Tulane on Friday. She then bumped 16 digs as UCF hit .309 on the way to a sweep over Memphis on Sunday.

Thompson continues to shine on both ends of the court, as she finished a 2-0 weekend with 3.33 digs, 0.67 blocks, 7.67 points and 6.83 kills per set. Thompson hit .415 with a team-best 22 kills, eight digs and three blocks in a sweep over SMU to start off the weekend. On Sunday, she put down another 19 kills while hitting .389 with 12 digs and one block, as Cincinnati won its ninth-consecutive set with a 3-0 victory over Houston.

Turner averaged 13.00 assists per set and paced UConn to hitting over .250 in a 3-1 win at Temple.  She registered 52 assists and 11 digs for her eighth double-double of the season. Turner also delivered six kills with one error on 15 attempts for a .333 hitting percentage. The senior setter leads the conference in assists this season.

Payne hit .487 and had 11 kills in each of the Bulls’ three-set wins over the weekend. She had no errors on 16 swings to record a .688 hitting percentage with two blocks against Memphis. Payne then hit .348 with four blocks to help her team complete a weekend sweep in a 3-0 win over Tulane.