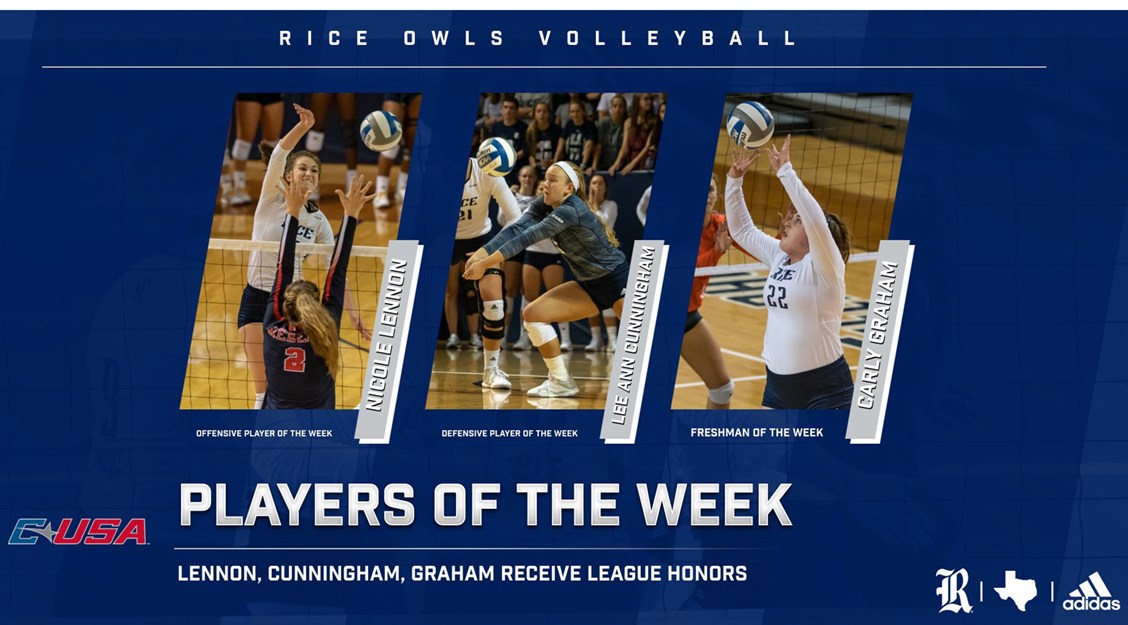 Rice took down a pair of teams atop the Conference USA standings over the weekend to amass three of the league’s weekly awards. FIU's Abbie Hughes rounded out the honorees.  Current Photo via Rice Athletics

Nicole Lennon, Rice, So., Katy, Texas
The Owls secured a pair of huge four-set victories on the weekend over reigning C-USA Champion WKU in Bowling Green and UTSA in Houston. Both teams were undefeated coming into the weekend before facing Rice. Lennon played a pivotal role in the defeats, beginning with UTSA on Friday. The outside hitter led her squad with 15 kills, a season-high 18 digs and two blocks. The league’s biggest win of the week came on Sunday as Lennon powered her offense to snap WKU’s 58-match C-USA home win streak. The Texas product notched her team-high eighth double-double of the year with a match-best 21 kills on a .487 hitting clip and 15 digs, along with five blocks. Lennon manufactured 4.5 kills per set, 5.06 points per set and 4.12 digs per set on the weekend.

The #CUSAVB Players of the Week have been announced and the Owls have everyone's attention!

Lee Ann Cunningham, Rice, Jr., Louisville, Ky.
Cunningham was a defensive stalwart for Rice through its 2-0 weekend in conference action. The junior collected 27 digs and eight assists against UTSA and held the Roadrunners to a season-low .105 hitting percentage. The libero turned to WKU on Sunday and grabbed another six assists and nine digs as the Owl defense once again held its opponent to its lowest attack percentage of the C-USA season (.192).

Abbie Hughes, FIU, Fr., Mason, Ohio
The Panther setter anchored her offense to a 1-1 week, handing a streaking Florida Atlantic its first C-USA loss and snapping the team’s 10-match win streak. On Friday, Hughes recorded 37 assists at a .463 percent efficiency, and added three blocks and 10 digs to complete the double-double. The freshman facilitated the Panthers’ .375 hitting percentage against the Owls. FIU traveled to North Texas on Sunday, where the newcomer lifted 31 helpers on 66 attempts and tallied five digs, two kills, two aces and a block. The Ohio native averaged 8.5 assists per set, 1.88 digs per set and 0.5 blocks in the eight-set effort.

Carly Graham, Rice, Fr., Spring, Texas
Graham posted a pair of double-doubles against two of the top teams in the league as a freshman over the weekend. Playing as a part of a 6-2 rotation, the Owl setter compiled 25 assists on 58 attempts with 10 digs against UTSA. Graham grew stronger at WKU, muscling 29 assists and 15 digs with four kills in six attempts. The Spring, Texas, native registered 6.75 assists per set, 3.12 digs a set and 1.38 points a set.