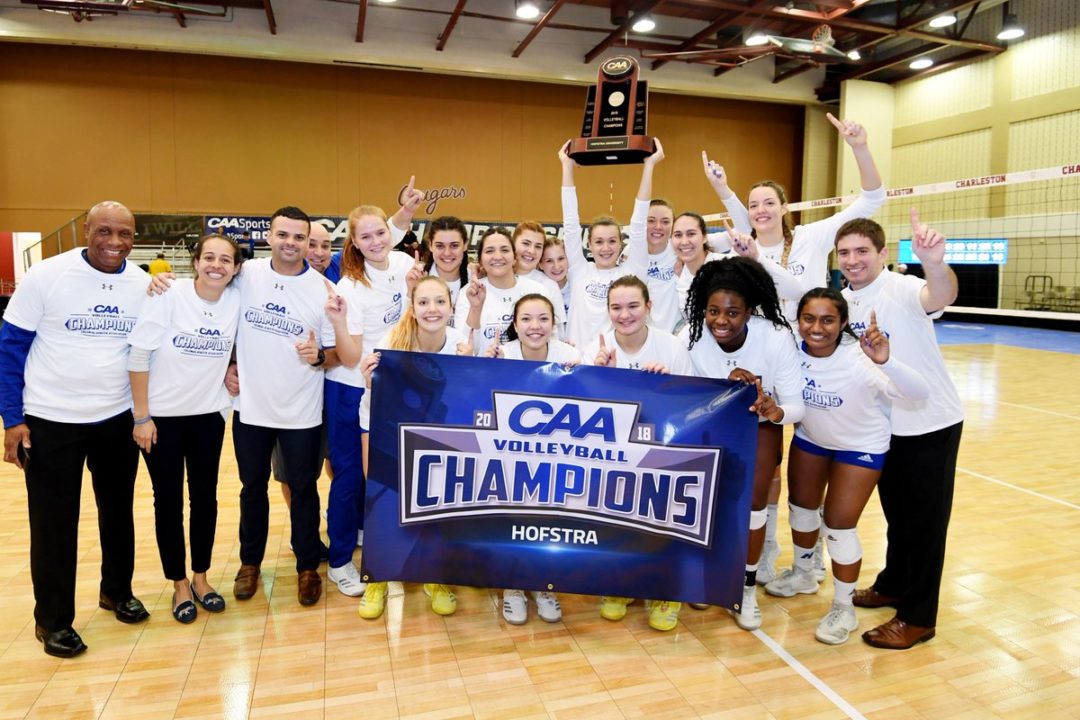 CHARLESTON, S.C. – Colonial Athletic Association Championship Most Outstanding Player Laura Masciullo slammed down a match-high 25 kills and CAA All-Tournament selection Michela Rucli tallied a career-high 20 kills as the Hofstra Volleyball captured the 2018 CAA Championship with a five-set win over James Madison on Sunday afternoon at the F. Mitchell Johnson Center on the campus of the College of Charleston. Senior Nanishka Perez also earned a spot on the All-Tournament team with a 10-kill, 14-dig effort in the championship match. Rucli also went over the 1,000-kill mark for her career in the match and now has 1,018.

The two teams split the first two sets and the third set was deadlocked at eight before Hofstra took complete control of the pivotal set with an incredible 13-0 run that made it 21-8. The run would be 17-3 in total as Hofstra took a 25-11 win in the third set.

James Madison would earn the win in the fourth set and the two teams would head to a fifth set for the second time this season. Hofstra took complete control at the onset of the final stanza as Perez stepped to the service line and pushed the Pride to the first seven points of the set. Rucli and Masciullo each had a pair of kills during the run to give Hofstra the commanding lead. James Madison closed the gap to five, 12-7, later in the set, before Hofstra stopped any thoughts of a comeback by the Dukes and Masciullo ended the match with her 25th kill.

The NCAA Championship Selection Show will air on ESPNU on Sunday, November 25 at 8:30 p.m.

The Dukes (22-7) fought for the first set victory but dropped the next two to the Pride (25-7) before taking the fourth set to force a fifth. The two squads tied for the regular-season CAA title after both going 13-3 in conference action.

MATCH NOTES
– M’Kaela White also notched double-digit kills with 12 on the match.
– Both White and Brind’Amour hit over .300 with .476 and .389 clips, respectively.
– Bryn Recker (9) and Kelly Vahos (8) also contributed significantly offensively.
– Recker was one kill off her 16th double-double of the season as she added 10 digs.
– A new career high was set with Marshall’s 17 digs.
– Martin and Tilbe Yaglioglu each tallied nine digs.
– White served up three aces to lead the match while Yaglioglu, Driscoll and Marshall had one apiece.
– Including her six blocks today, Gail places second all-time for her 414 career block assists and fourth all-time for her 451 total career blocks.
– The Dukes hit .367 in the second set and .417 in the fourth set.
– JMU posted nine blocks to Hofstra’s five.

HOW IT HAPPENED
– It was a close first set until the Dukes jumped ahead with a 6-0 run with kills from Vahos and Brind’Amour, two Pride attack errors and a Brind’Amour/Gail block. Hofstra caught back up and it was neck-and-neck until back-to-back Recker kills sealed the first set for JMU.
– The Pride used multiple small runs to cushion their advantage and, though the Dukes picked up points here and there, Hofstra tied the match at a set apiece.
– Hofstra utilized a 13-1 run to take a huge 21-9 lead from which JMU couldn’t recover.
– The squads spent the fourth set trading points until the very end when two Hofstra errors helped JMU force a fifth set.
– Hofstra began the fifth frame with seven consecutive points. The Dukes thwarted two match points thanks to a White kill and a crucial block from White and Martin, but it wasn’t enough and the Pride prevailed.

CHAMPIONSHIP HONORS
– Leading the Dukes with 32 kills on the weekend, Briley Brind’Amour was added to the All-Tournament team. She hit .338 over two matches and notched four total blocks.
– M’Kaela White also earned a spot on the All-Tournament team. She recorded 26 kills and hit .382. She amassed 14 total blocks, including three solo blocks, and had three service aces.