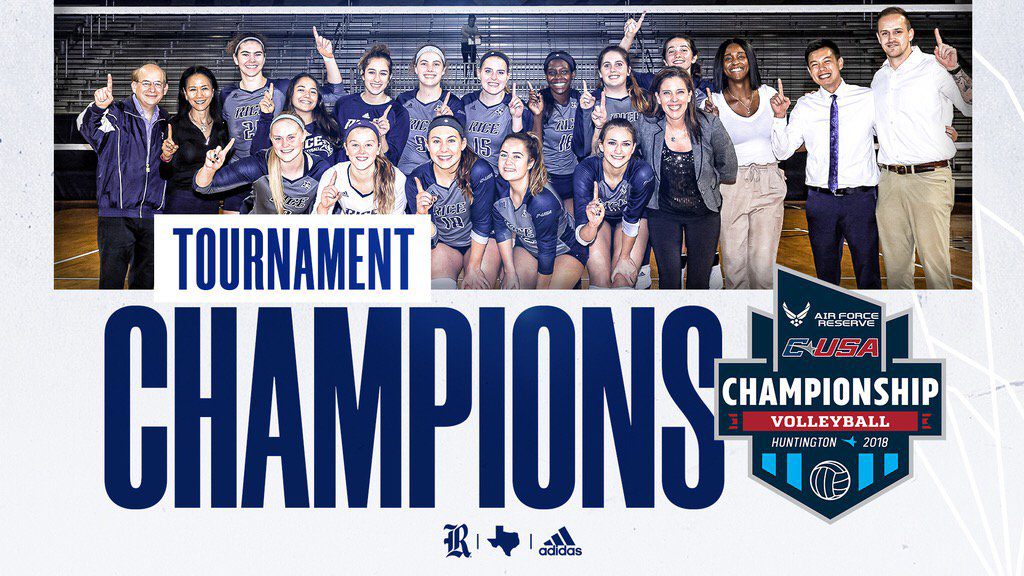 For the fourth time in program history, and first since 2009, the Rice Owls volleyball team is NCAA Tournament bound after sweeping (25-21, 25-22, 26-24) FIU Sunday afternoon in the Conference USA Championships title match. Current Photo via Rice Athletics

HUNTINGTON, W.V. – For the fourth time in program history, and first since 2009, the Rice Owls volleyball team is NCAA Tournament bound after sweeping (25-21, 25-22, 26-24) FIU Sunday afternoon in the Conference USA Championships title match at the Cam Henderson Center.

Rice (24-6) earned the C-USA automatic bid to the NCAA Tournament for the second time in school history, having also accomplished the feat in 2009. The Owls were an at-large qualifier in 2004 and 2008.

🏆 TICKET PUNCHED! For the 2nd time in school history, your Owls have won the #CUSAChamp and are @NCAAVolleyball Tournament bound! They sweep the Panthers for their 24th win of the season. #GoOwls👐 pic.twitter.com/JxvW4SEjIP

The Owls, who lost just one set all weekend, also posted 11.0 team blocks, led by eight from Morgan.

Adekunle, Graham, Lennon, and Morgan all earned spots on the C-USA All-Tournament Team with Adekunle earning MVP honors. The freshman from Humble, Texas posted 30 kills and hit .531 for the championship along with nine blocks.

RICE HEAD COACH GENNY VOLPE
Postgame Reaction…
“I’m really proud of our team. It was a great match and we came out pretty strong and set the tone early on. FIU has some tough offensive weapons who are difficult to defend. To watch our team flourish in a championship match was a lot of fun. Sometimes if you’re the No. 1 seed you have a little bit of pressure on you but I didn’t see that with this team. We were very composed, and confident and were never worried about rankings or outside distractions.”

On winning the title with a young group…
“Our future is obviously very bright. We just have to keep our foot on the gas. We have high hopes for this program to do big things and these young players are going to help us reach those goals.”

Anota Adekunle on the championship and winning MVP…
“It’s an amazing feeling. Just being with my team and being able to celebrate with them is a wonderful feeling. It was just my first year and getting to know these girls and forming a sisterhood with them is amazing.”

Nicole Lennon on winning her first championship…
“This was our goal from the very first day. We knew from the beginning there was nothing stopping us. I’m just elated!”

HOW IT HAPPENED
Set 1
Rice couldn’t have asked for a better start, opening up a 6-0 lead on the Panthers on a pair of kills from Muse and two FIU errors. The Panthers fought back however, tying the set at 18-18 with a 5-1 run. Rice never relinquished the lead though, outscoring the Panthers 7-3 to win 25-21.

Set 2
The Owls once again started fast in set two by using a balanced scoring attack and jumping out to a 13-7 advantage. FIU never got closer than 22-19 late, as Rice closed strong to win 25-22. The Owls hit just .220 for the set but managed to hold FIU to a match-low .077 hitting percentage.

Set 3
In Rice’s match-clinching 26-24 set three victory there were seven ties and four lead changes, including an FIU lead of 24-22. But as has been the case all season, the Owls played at their best with their back against the wall, reeling off four consecutive points to earn a trip to the dance.

UP NEXT
The Owls will learn their NCAA Tournament opponent and location this Sunday at 7:30 p.m. (CT) when the NCAA Volleyball Selection Show airs on ESPNU.

The FIU volleyball team’s Cinderella run in the 2018 Air Force Reserve Conference USA Volleyball Championship came to a close on Sunday with a 3-0 loss to the regular season champion and top-seeded Rice Owls in the championship match at Marshall University’s Cam Henderson Center in Huntington, West Virginia.

The Panthers drop to 19-12 on the year. The Owls, who earn the league’s automatic bid to the NCAA Tournament, improves to 24-6.

– Trailing in the match, 2-0, the Panthers held a 24-22 lead, one-point from extending the contest to a fourth set. The Owls, however, scored four of the final six points of the match for the victory.