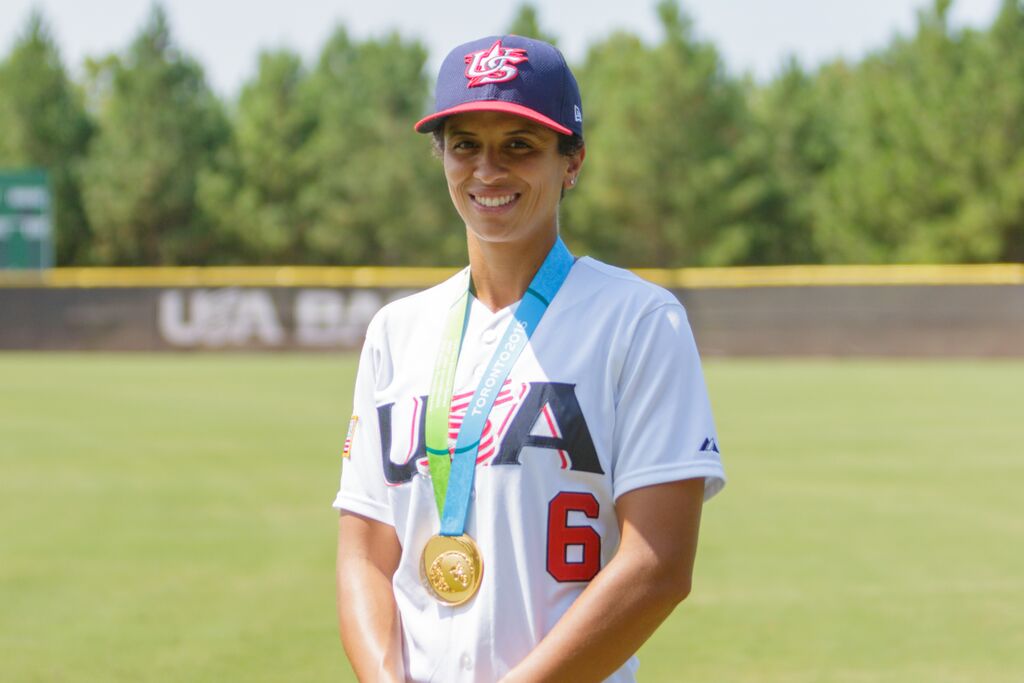 Malaika went from college volleyball to becoming one of America's most decorated female athletes in a different sport. Current Photo via USA Baseball

Malaika Underwood has represented the United States in baseball more than any other player in history – male or female.

She has been on every women’s national team since 2006, making this year twelve. The next-closest American national team members are Houston Astros manager A.J. Hinch and Chicago Cubs outfield Albert Almora Jr., with seven and six appearances each, respectively. And even though she’s racked up double the National Team appearances of Hinch and Almora, her path to where she today differed drastically, in that she couldn’t play baseball in college.

So instead, Underwood played volleyball. But a busy multi-sport schedule came first. After playing Little League baseball through the eighth grade, Underwood had a decision to make when she got to high school.

“The rubber met the road. I had to decide whether I was going to switch to softball or not,” Underwood told VolleyMob. “I just got it in my mind that I wanted to give it a go at baseball and try out for the baseball team. And in the meantime, I knew I didn’t want to be in regular PE classes. So I thought, ‘well, I’ve played volleyball a handful of times for fun.'”

A family friend took her to the beach to learn some basic skills the summer before freshman year, and Underwood made the junior varsity team at La Jolla High School. Because the seasons are staggered, she could also play on the school’s basketball and baseball teams.

As she climbed the ranks in all three sports, she realized that playing baseball was unlikely to earn her a college scholarship, at least not at the type of school she’d dreamt of. Softball might have, but the sport she loves is baseball. 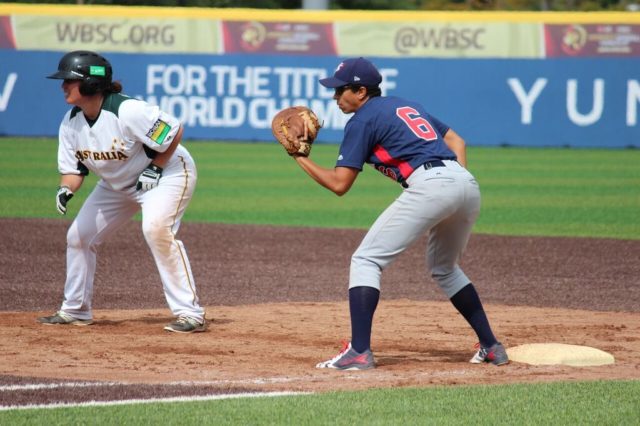 “Going into my sophomore year, I made varsity for volleyball and basketball and started to see some preliminary interest from colleges in those sports,” Underwood explained. “And so I felt like it sort of gave me the freedom to continue to play baseball, because a big reason why people were pressuring me (people being friends and parents of friends, even coaches to a certain extent), encouraging me to switch to softball, is because they thought it would provide opportunities to go to college.”

“When I started to get interest from college coaches in those other sports, I felt like ‘okay, I have the freedom to continue to play baseball.'”

She received offers to play both basketball and volleyball at the Division I level, and knew that any opportunities to play baseball in college would have come at lower level and smaller schools. In the end, it was more the school (the University of North Carolina), rather than the sport, that made her stick with volleyball.

At UNC, Underwood was named the ACC Tournament and team MVP her junior year, and a team captain and recipient of an NCAA Postgraduate scholarship her senior year, among other accolades.

“I grew up on Michael Jordan fan, so going to the same school that Michael Jordan went to, it was kinda cool. It just fit me and I’m glad that I did make that choice, because I had a great time there not just athletically, but academically and socially,” she said. “I was fortunate to get a full ride to play there, and loved my career there, and my time there, and my teammates, and I wouldn’t have traded it for anything – but I missed baseball.” 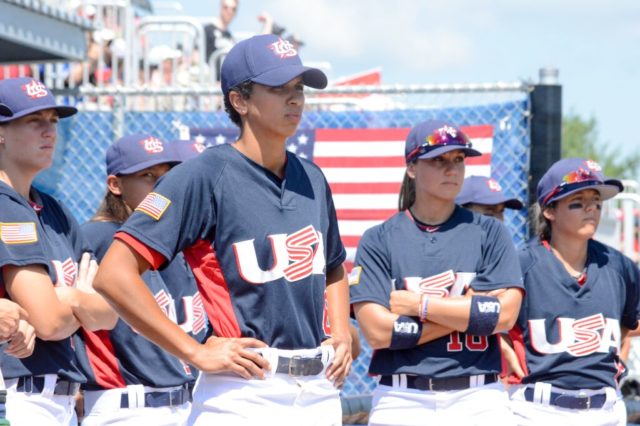 Underwood began coaching a children’s recreational baseball league, doing so through graduation in 2003, then grad school and into her first post-grad job. However, she still missed playing.

While looking for a local men’s league to join, she found out that USA Baseball was conveniently holding open tryouts for their women’s team in Cary, North Carolina.

“I thought, ‘well I haven’t played in a while, but maybe it’s just like riding a bike,'” Underwood said. “So I went to the [batting]cage, and I got friends to hit me ground balls and just get ready for tryouts. And I went out, and I was fortunate enough to make the team, and haven’t looked back since.”

The fact that she was an elite athlete for so many years meant that she didn’t have to waste time getting back in shape to play.

“When I picked baseball back up in 2006, it wasn’t as if I just jumped off the couch and had to lose weight or develop strength or anything like that. I was ready to go,” she said. “I just needed to hone my baseball skills, maybe get my arm back in shape. and take some swings, and do some sports-specific stuff. But from a general perspective, I felt ready to go.”

But like many Americans today, Underwood didn’t even know that women’s baseball existed at the national level until she discovered the tryout. The team’s visibility has improved since 2006, and as we spoke, Underwood was on her way to training camp for the 2018 Women’s Baseball World Cup, to be held in Florida later this month – a big step for getting national exposure. 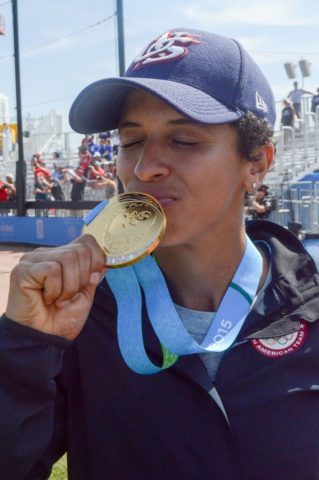 But Underwood laments the “flash in the pan” media coverage her sport currently receives as one reason for its stifled growth.

“Mo’ne Davis was the headline when she played in the Little League World Series, which was great, but that same time in 2015, we, the USA Baseball Women’s National Team, were playing in the Pan Am games for the first time ever,” she said. “And we won the gold that year, and even within the context of covering Mo’ne Davis, and all she was accomplishing, none of the broadcasters on ESPN has been mentioned the fact that we were playing, or suggested that ‘look, Mo’ne, isn’t the only girl.'”

“I’m optimistic that at some point in my lifetime, when I walk up to someone and say that I played baseball, they won’t try to correct me and tell me that I actually played softball, when that’s not the case.”

She doesn’t mean to take away from what Davis did, but rather highlight that there are a growing number of opportunities for women to play that get overlooked – and there have been since long before people took notice of the infamous All-American Girls Baseball League of A League of Their Own fame.

“We are developing and growing as a sport, and I think that that will continue,” said Underwood. “So I’m optimistic that at some point in my lifetime, when I walk up to someone and say that I played baseball, they won’t try to correct me and tell me that I actually played softball, when that’s not the case.”

Underwood knows that she has a chance to help shift the script, and is particularly invested in doing so, as she gave birth to her first daughter earlier this year.

“If she’s interested in sports when she grows up, we’re definitely going to expose her to as many different sports as we can,” Underwood said. “I’m a big proponent of allowing kids, and encouraging kids, to play as many sports as possible and to become well-rounded athletes… And I think it’s not true that kids fall behind if they’re not playing year-round sports. I think that the elite athletes will bubble up to the top.”

In terms of promoting more young girls to get into baseball specifically, she suggests that girls-only teams are beneficial.

“That’s not to say I don’t think that girls can’t play with boys, or co-ed. Co-ed teams are certainly better than nothing,” Underwood explained. “I think a big reason why a lot of girls switch, is not always just because that’s where that college scholarships are – I mean that is a big reason, especially at certain competitive level – but I think a lot of the time it’s because they just want to play with other girls. They don’t want to be the only girl on a coed team playing baseball.” 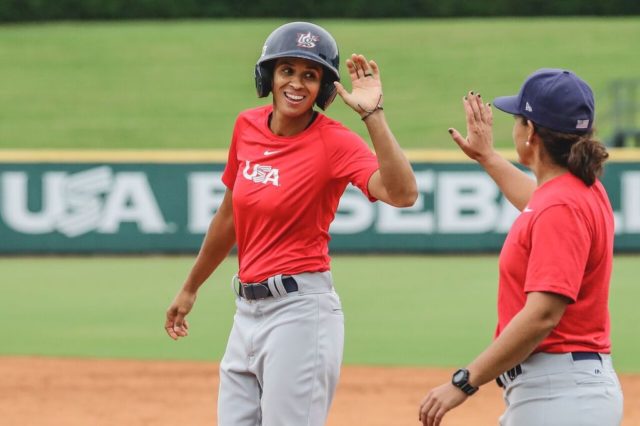 But with a packed schedule off the field, the best thing Underwood can for the sport right now is play. In addition to practicing, competing, and raising her new baby, the 37-year-old has a full-time job in sports marketing.

“It’s been a lot to manage, but it’s worth it. And I guess in some small way, I hope that my effort around that is an example to my daughter about going after your dream to do the things that you love,” she said. “But if it really is your dream, it’s worth the hard work and worth the sacrifices.”