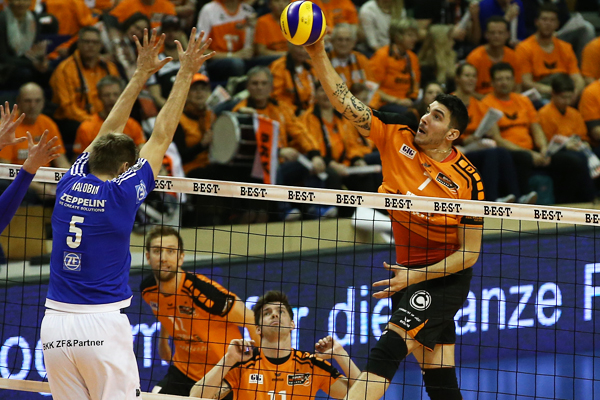 Besides recently winning a silver medal with the French national team in this year's VNL, Le Goff has also won gold at the 2015 European Championship and 2015 and 2017 World Leagues Current Photo via Eckhard Herfet @ berlin-recycling-volleys.de

Bundesliga’s Berlin Br Volleys has announced in its official website the signing of Nicolas Le Goff to its roster. The 29-year-old 6’9 middle blocker French national teamer will thus return to the team after a 2-year break in which he played in Turkey and Italy. Back in2015/16, he won the German Cup, the DVV Cup and the CEV Cup with Berlin.

Here are his first words upon his return:

“I had a long conversation with Cedric, which was very positive. He wanted to bring me back to Berlin and of course I remembered the incredible season I had here in 15/16. After that we found a way to make my comeback possible. I’ve known Cedric for a long time and I think he’ll be good for the club and us players. It has always been a pleasure to work with him because he is a good coach and person. Of course he can help me a lot because Cedric, as a former middle blocker, knows exactly what my position is all about. I would like to build on my successful time back then and win with BR Volleys new titles. I’m really looking forward to the fans and the unique atmosphere in the volleyball temple.”

Berlin’s top brass was likewise very excited with the transfer:

“We had a lot of applications for this position, and ultimately we chose Nicolas because we know what we are about. For me, Nicolas is one of the most renowned middle-class blockers in Europe. He is always welcome here.” BR Volleys CEO Kaweh Niroomand

Besides recently winning a silver medal with the French national team in this year’s VNL, Le Goff has also won gold at the 2015 European Championship and 2015 and 2017 World Leagues. At Berlin, he’ll find a club that wil try to repeat as League champions this season and will be joined by Americans Ben Patch, Dustin Watten, Jeff Jendryk, and Kyle Russel.