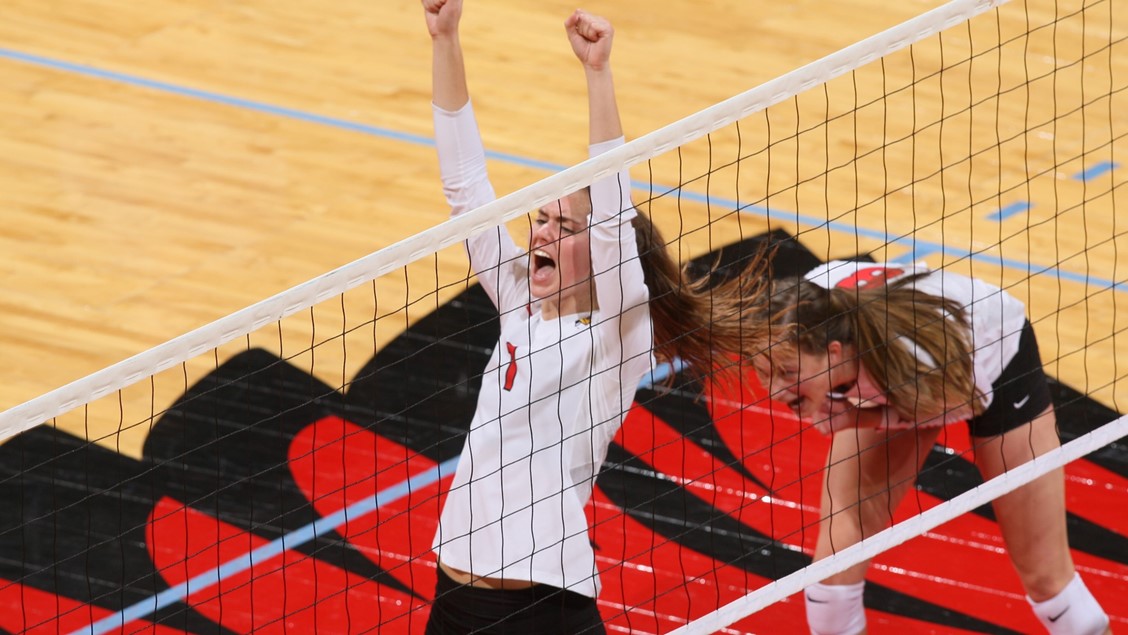 NORMAL, Ill. – Illinois State bested No. 19 Northern Iowa in every statistical category except digs and held off a late Panther surge en route to a five-set upset win, its first over a ranked foe since 2003.

After coming back from down 2-1 in the match to send it to a decisive fifth set, UNI jumped out to a 7-3 lead in the final stanza. Three kills by junior middle blocker Piper Thomas and two by junior outside hitter Bri Weber helped the Panthers to the lead. Senior middle Jaelyn Keene kept Illinois State close with a trio of kills, but the Redbirds still trailed by three at 9-6. ISU scored eight of the next 10 with help from three kills by freshman middle Sydney Holt, a block and an ace by freshman setter Stef Jankiewicz and a block and a kill by sophomore outside Ella Francis. The rally put Illinois State up 14-11. A Thomas kill saved the first set point try, but a Keene kill sewed up the upset.

UNI cruised to an 8-2 lead in Set 1, including two kills and a block by Thomas and three ISU errors. Later down 12-16, Illinois State sliced the margin to one at 16-15 with putaways by four different players. The Panthers called timeout and scored five of the next seven, all on kills, to go up 21-17. The Redbirds tied it up at 21, but UNI wrapped up the 25-22 win with a final 4-1 run, capped by a Thomas kill.

Illinois State built a five-point advantage in Set 2 at 11-6 and later 14-9. Two kills each by Keene and Francis and an ace by Pence helped ISU to the initial edge. Back to back Armando kills made it 14-9. UNI was within one at 15-14 and three more times, last at 22-21, but couldn’t hold off a 3-0 Redbird run to end it. A stuff by Ali Line and Francis and Meier ace gave ISU the win.

The Redbirds jumped out to an 11-6 lead in Set 3 as Armondo notched two kills and a block and Francis chipped in two putaways. Up just three at 14-11, Illinois State put together a 5-0 run, with three kills and two UNI miscues, to vault ahead 19-11. The Panthers would get no closer than five the rest of the way (19-14). Two Francis kills and two Northern Iowa errors set up the final point, which came on an Armando putdown.

Northern Iowa took advantage of four ISU errors en route to a 10-7 edge in Set 4. Illinois State scored three of the next five, but UNI answered with a 6-0 run to go ahead 18-10. Four players tallied kills in the rally, while Hook notched a solo block.  The Redbirds cut the margin to four at 23-19, including two Holt kills and a stuff by Keene and Francis, and held off two UNI set point tries at 24-19, but a Jaydlin Seehase kill sent the match to the decisive fifth set.

Ella Francis led the Redbirds with 16 kills and four blocks. Juma Armandoregistered 14 kills, while Sydney Holtchipped in 13. Jaelyn Keene was the fourth Redbird with double-digit kills, with 11, including four in the decisive fifth set.

Stef Jankiewicz posted a double-double with a match-high 58 assists to go with 11 digs. Courtney Pence led all players with 37 digs, the eighth-highest single-match total in Illinois State history. Kendal Meier set a career high with 15 digs.

The win was Illinois State’s first over a Top 25 opponent since the Redbirds beat then-No. 8 UNI on Nov. 21, 2003 at Redbird Arena, also in five sets.

“I’m just so excited, so proud of the team,” said Illinois State head coach Leah Johnson. “I was thrilled with their performance. They followed the game plan. They took risks. We executed at such a high level for five sets and I’m just so proud of them.”

UNI (20-6, 10-2 MVC) built a big lead early in the first set and the Panthers needed all of it as the Redbirds fought back late in the set. The Panthers led by as many as six points early on but Illinois State slowly chipped away at the visitor’s lead, eventually tying it up at 21-21 after a four-point run. But UNI scored four of the final five points in the set to take an early advantage in the match.

Illinois State (15-10, 8-4) used an early five-point binge to take control of the second set. The five-straight points gave the Redbirds a 9-5 lead and the home team never trailed again in the set. UNI got back within a point at 22-21, but ISU scored the final three points in the set, the final on a service ace from Meier.

UNI seemed destined to complete its comeback when the Panthers scored the first five points of the fifth set, prompting both Illinois State timeouts. But the Redbirds scored three-straight points out of their second timeout and slowly clawed their way back into contention. Another three-point run later, capped by a Jankiewicz ace, helped the Redbirds tie it up at 9-9. Another three-point run, featuring kills from Francis and Holt, made it a 12-10 lead. A kill from Keene on match point finished off the win for Illinois State.

The Redbirds return to Redbird Arena Saturday night to host Drake at 7 p.m.

The Redbirds (15-10 overall, 8-4 MVC) defeated the Panthers for the third time in their last four matches at Redbird Arena. UNI (20-6 overall, 10-2 MVC) was held to a conference-low hitting percentage of .152 in the match. Prior to Friday’s match in MVC play, UNI’s lowest hitting percentage was .218 in a loss to Missouri State.

UNI looked to be in control in the fifth set as the Panthers took a commanding 5-0 lead. However, the Redbirds whittled away the advantage and tied the set at 9-9. Following a 10-10 tie, the Redbirds scored four of the next five points to take a 14-11 lead. Thomas secured a kill to fight off one match point, but Jaelyn Keene scored the game-winner and gave the Redbirds a 15-12 victory in the fifth.

UNI will play again on Sunday against Bradley in Peoria, Illinois. The Panthers and Braves will get underway at noon.

NOTES: Karlie Taylor has had 19 consecutive matches with double-figure kills totals … redshirt freshman Kate Busswitz made her collegiate debut in the third set … Busswitz also recorded her first collegiate kill in the match … Bri Weber moved into No. 10 on UNI’s all-time digs list as she surpassed Bre Payton’s total of 1,222 career digs … Weber has 1,230 career digs.