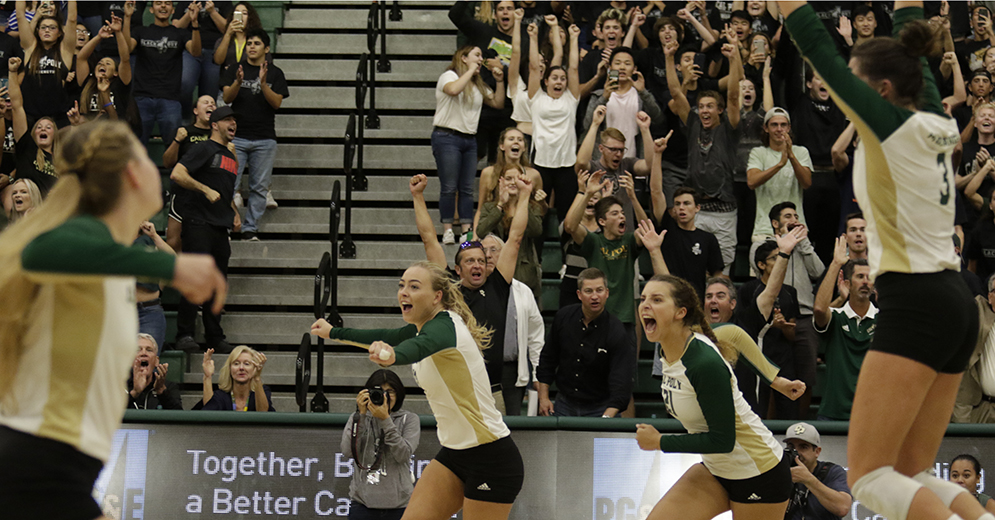 #20 Cal Poly won a five-set thriller over visiting Hawaii before a crowd of 3,032, the Mustangs' first volleyball sellout since 2006. Archive Photo via Cal Poly Athletics

The #20 Cal Poly Mustangs defeated the visiting Hawaii Rainbow Wahine at home for the first time in program history, notching their 16th straight victory this season and remaining undefeated in Big West play.

In the first set, the Rainbow Wahine led throughout but Cal Poly was able to get within one at 24-23 before a kill by Hawaii’s junior outside McKenna Granato ended the frame 25-23.  The Mustangs responded in set two, building an 18-13 lead then hanging on to a 25-23 victory.

The tiebreaker set saw 12 ties and six lead changes, with Hawaii reaching match point first on a Granato kill. The Mustangs answered with a Greisen kill then scored the two deciding points on an Adlee Van Winden kill and Hawaii attack error to seal the victory 17-15.

SAN LUIS OBISPO— In front of a deafening sellout crowd at Mott Athletics Center (the first sellout for volleyball since 2006), the No. 23 Cal Poly volleyball team defeated Hawai’i in a thrilling five-set match Friday (25-23, 25-23, 25-23, 18-25, 17-15) that lasted nearly three hours to remain undefeated and in sole first place in the Big West.

Before Friday, the last time Cal Poly won a five-set match at home was Nov. 6, 2015 against UC Irvine.

Cal Poly outhit Hawai’i in four of the five sets.

The Rainbow Wahine were led by senior Emily Maglio who finished with a match-high 27 kills, hitting .381.

The fifth set (which is first to 15 points), saw 12 ties and six lead changes as both teams traded points to be tied at 8 as they switched sides. They would continue to go back-and-forth with each, remaining tied at 14. Facing a match point down 15-14, a Raeann Greisen kill tied it again at 15. An Adlee Van Winden kill gave the Mustangs a 16-15 lead before a Hawai’i attack error won the match for Cal Poly.

The Mustangs are now 5-0 at home and will look to remain undefeated at Mott Athletics Center and in conference play next week as they host UCSB Friday at 7 p.m.

Maglio pounded her match-high 27 kills on a career-high 63 swings, nearly doubling up on her former career-high of 35 attacks against Baylor earlier this season. She hit .381 with just three hitting errors for the match. She notched double-digits in kills for the 17th match this year—including 12 of the last 13 matches. Maglio recorded team highs in kills and blocks for the 10th and 19th times this season.

In the first set, Kahakai passed former UH standout Tara Hittle, who played from 2004-08, to move into No. 4 alone in the UH career dig record book. Kahakai entered the game needing just three digs to tie Hittle at 1,315 career digs. Kahakai recorded 10 digs alone in the first set and finished the night with 18 total digs. Kahakai now needs 54 digs to tie Tita Ahuna at No. 3 with 1,384 career digs. It marked Kahakai’s 12th straight and 18th overall match with double-digit digs.

Senior outside hitter Kendra Koelsch recorded a career-high 14 kills while hitting .308 for the match with only two errors in 39 attacks. She also contributed with four digs and a block for a career-high 14.5 total points.

Junior outside hitter McKenna Granato also put down 14 kills in the match, but hit .018 with 13 errors in 56 attacks. She tied her career-high with 19 digs to record her ninth double-double of the season. Granato had a match-high three service aces while adding a block. She had double-digit kills for the 16th time this year.

For just the second time in her career, sophomore setter Norene Iosia hit the 60 assist mark in a match. She also posted her 13th double-double of the year as she tied her career-high with 18 digs. Iosia had a hand in three blocks and tied her career high with three kills as she got some swings on the outside with Faith Ma’afala setting in relief.

The second set saw both teams fight hard with seven early ties before the Mustangs got things rolling. But after being tied at 8-8, Cal Poly went on a 3-0 run and then held off the ‘Bows until late in the frame. Just as the Mustangs did in Set 1, the Rainbow Wahine closed to within one point at 23-24. But UH’s attack sailed wide allowing Cal Poly to take the second set, 25-23.

Cal Poly jumped out to an early lead and was cruising, building a lead by as many as five points twice, the last coming at 19-14. But the Rainbow Wahine rallied to erase their deficit as they ended the set on an 8-to-2 run to steal Set 3, 25-23.

In the fourth set, Hawai’i kept things close and trailed by just two points at 15-17 before the Mustangs finished the frame on an 8-to-3 run to pull away for a 25-18 set win.

The race to 15 in the fifth and final set was a battle with teams exchanging sideouts that amounted to 12 ties and six lead changes in the fifth set alone. Iosia tied the set at 12-12 on a kill and then a Maglio/Iosia block gave UH a 13-12 lead. Hawai’i had a match-point opportunity at 14-13, but a UH serving error knotted the score at 14-14. The ‘Bows then staved off two Cal Poly match points before the Mustangs earned the win on a UH hitting error to give them the fifth set win, 17-15.

The Mustangs were led by Raeann Greisen‘s 20 kills and match-high five blocks (tied with Maglio). Cal Poly’s setter Taylor Nelson had a match-high 63 assists and Katherine Brouker popped up a match-high 28 digs.

Cal Poly extended their third longest win streak in the nation to 16 and remained undefeated in conference play. It is the first time since 1985 that the Mustangs swept the season series over Hawai’i (both matches were in Honolulu in 1985) and it marked the first time that CP has defeated UH in San Luis Obispo in 12 matches dating back to 1980.