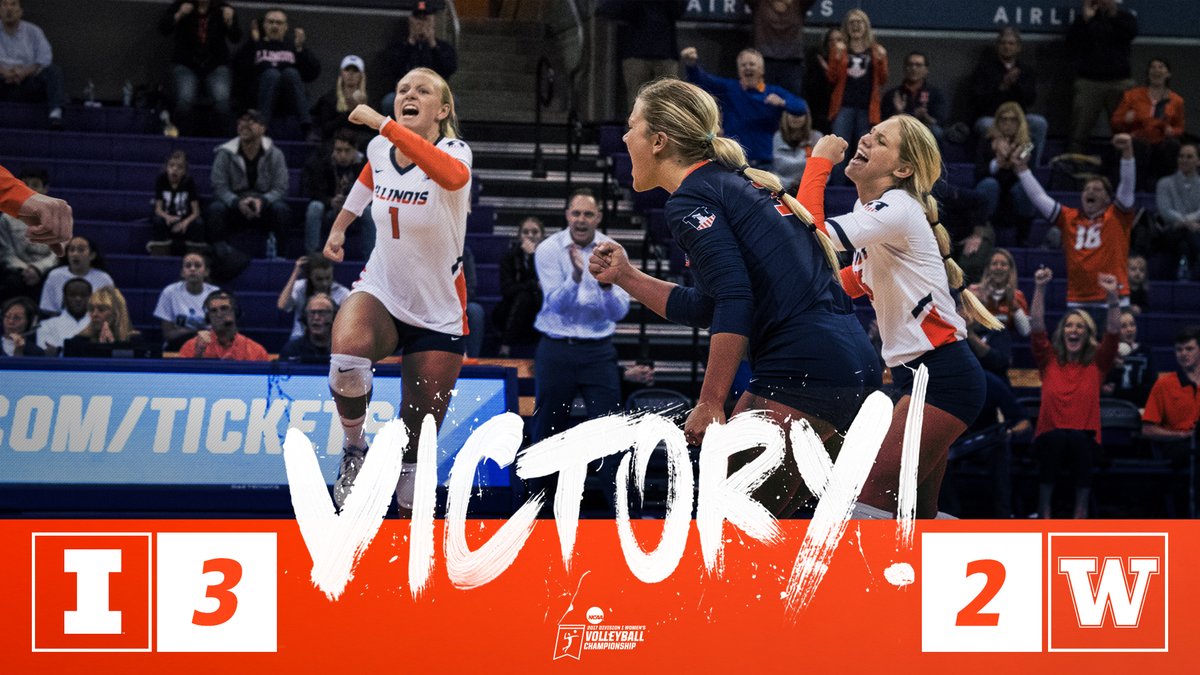 Illinois stunned #8 Washington on the road to reach their second Sweet 16 in three seasons. Archive Photo via Illinois Athletics/Volleyball

Washington had no troubles in dispatching LIU Brooklyn last night, as they did so in straight sets. It wasn’t as easy for Illinois who needed five to defeat Hawaii, but the result is the same – a victory. You can get caught up with anything that you missed with VolleyMob’s first round recap of the pod.

Illinois pulled off the biggest upset of the second round (in terms of seed) late into the action as the Fighting Illini downed #8 Washington in Seattle. While the win puts an abrupt halt to Washington’s season and a phenomenal senior class, Illinois reaches their second Sweet 16 in three seasons after upending their hosting seed in 2015 as well.

In total for the match, Illinois hit .287 compared to .256 for Washington and had more aces (4-2) and blocks (13-9). On the other end, Washington posted more digs (71-64) and less serve errors (6-7). The biggest piece was the block, which has been Illinois’ calling card all season long and won a battle against another top blocking squad in the country. Sure enough, Illinois totaled 102 points to Washington’s 98. That four point difference? The same difference in Illinois’ block to Washington’s. And once again spearheading that block was Ali Bastianelli (seven kills, eight blocks), one of the top defensive middle blockers in the country.

Illinois made their mark and set the tempo early as they came out with a 25-22 first set win after Jacqueline Quade (17 kills, .234, six blocks) put down the final kill in the game. Washington though responded in the second with a 25-17 set victory as Kara Bajema (26 kills, .267, 11 digs) starred in the set. That would add to the theme of the match, as both teams pushed the other and responded throughout.

After the intermission, it didn’t appear that way as Washington built off its second set win. It appeared they had the match in their control at that point as the combination of Bajema, Carly DeHoog (17 kills, .289, six digs), Courtney Schwan (14 kills, 14 digs) and Bailey Tanner (53 assists, nine digs) led to a 25-20 set victory and a 2-1 edge.

Down 2-1 in sets and without momentum on the road, Illinois dug deep and turned a 16-15 deficit into a 23-16 lead on an 8-0 run. Quade had a pair of kills in the run while Beth Prince (12 kills) ignited the run after setter Jordyn Poulter (49 assists, 11 digs, seven kills) connected with her to tie at 16 and get things going. From there they put things away at 25-17 to force a fifth and decisive set.

With a Sweet 16 spot on the line, Illinois jumped ahead 6-2 with Caroline Welsh (eight digs, four assists) serving strong and even getting her lone ace of the match. The lead continued to 8-3 at the switch and had seemingly the exclamation point at 12-5 when Megan Cooney (13 kills, .444) and Tyanna Omazic (nine kills, .286, four blocks) rejected Bajema, who had been so good for Washington. Maybe that was the sign of things to come, although the score may have represented that enough. Finally, at 14-9, Cooney rocked down the final kill to complete the upset.

Moving forward, Washington’s season comes to an end after a strong run toward the end of the season. They’ll sorely miss their senior class as the group featuring DeHoog, Schwan, Tanner, Tia Scambray, Crissy Jones, Marion Hazelwood and company will be missed.

Illinois meanwhile moves ahead in what has become a very Big Ten friendly regional. The top seed and host will be Penn State, but the Fighting Illini get a different conference foe as they meet Michigan State in the Sweet 16 next week.