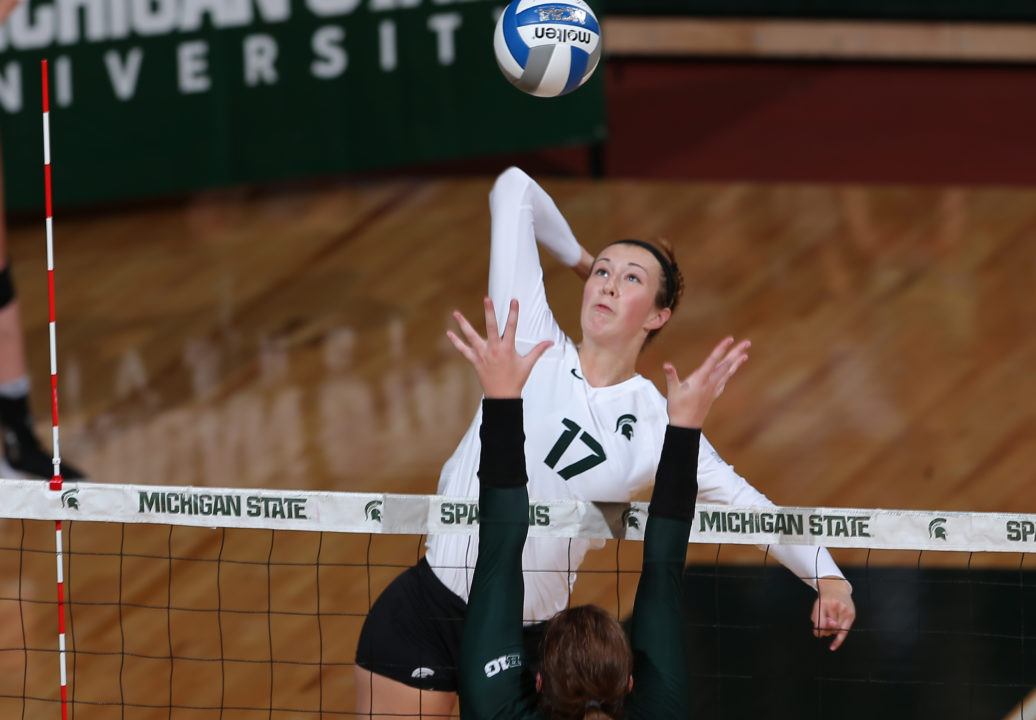 Michigan State senior Alyssa Garvelink shares about the team’s tour to Italy, maturity in the lineup and practice breakdown. The middle blocker was a second team All-American and first team All-Big Ten selection in 2016 after putting up 1.40 blocks per set, third most in the Big Ten and 19th nationally. The Holland, Michigan, native also put down 2.39 kills per set, while hitting at a .359 clip, ranking seventh among Big Ten player.

No. 17 Michigan State kicks off the 2017 season at the Hyatt Regency Invitational hosted by Georgia Tech. The tournament will also pit the Spartans against Furman and Auburn. A matchup with No. 12 Florida in week three will help prepare the team for the rigorous Big Ten slate.

Garvelink’s take on Week 1 of preseason camp is below.

Like every other team in the country, Michigan State Volleyball is currently in the second week of preseason. Our team has a lot of focus and determination after falling short in the second round of the NCAA Tournament last season. That loss is fueling us through the long days of preseason practices.

This past June, our team had the incredible opportunity to take a foreign tour in Italy. I think everyone on the team would agree that it was an unforgettable trip. We got the opportunity to visit all the “bucket list” spots –  the Colosseum, Vatican City, the Sistine Chapel, and so much more. Most of our incoming freshmen were able to come on the trip with us, which ended up being a great bonding experience not only on the court, but off of it as well.

Something that makes our team so special is the fact that we’ve got seven seniors, most of whom are returning starters. It’s so awesome seeing our whole senior class stepping up and leading the young ones. Not only does maturity help, but also the fact that we’ve been playing side-by-side for the last three years. Actually, I think that there’s a maturity about this team throughout all of the classes which I think shows our drive and determination. The freshmen have really been fitting in well. They are right there alongside us, hardly missing a beat.

Practices have been going great so far. There’s a high amount of energy and competitiveness that is contagious. We have spent morning practices breaking down skills and getting reps in. The afternoons consist of 6v6 playing drills (everyone’s favorite!). We are all just really focused on getting better at the little things. Our coach has really been stressing the process and having a solid foundation – whether that be footwork, hand placement, platform angles, etc. You name it, chances are we’re probably working on it.

We’re working toward our Green and White scrimmage in Jenison Fieldhouse this Saturday, which will reunite us with our awesome fans.  Then we will be on to preparing for our first non-conference tournament at Georgia Tech. We’re working on taking things day by day and not getting too ahead of ourselves. As a program, we’re working toward accomplishing big things this season and have the caliber of coaches, athletes, and people to accomplish our goals moving forward.

I can’t wait to see what this season holds for this team. I wouldn’t want to go through the grind with anyone else.