Iowa Draws Record Crowd, Falls to No. 5 Nebraska in Sweep 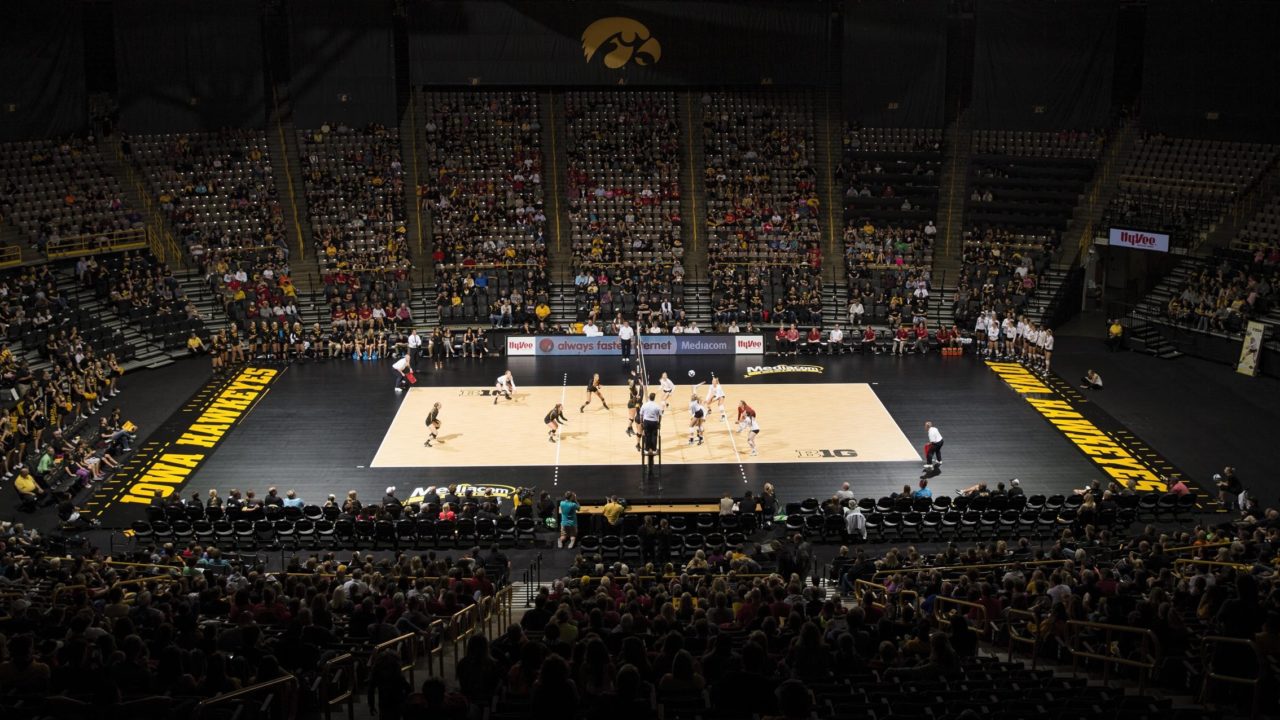 No. 2 Nebraska stayed perfect in Big Ten play with a road sweep of travel partner Iowa on Saturday thanks to a balanced offensive attack with five players notching six or more kills.  Archive Photo via Iowa Athletics

IOWA CITY, Iowa – No. 2 Nebraska stayed perfect in Big Ten play with a road sweep of travel partner Iowa on Saturday thanks to a balanced offensive attack.

Iowa led by two four times in the early stages of Set 1, last at 11-9. After a tie at 6-all, the Hawkeyes scored five of the next eight, including two kills and two blocks by Louis, to earn the advantage. Nebraska broke away with a 10-2 run, vaulting ahead 19-13, while forcing Iowa to use both of its timeouts. Hunter and Maloney served up aces and four players notched kills in the run. The Hawkeyes scored three of the next four, including a pair of Orr putaways, but the Huskers closed out the set with five of the final seven points. Two Albrecht kills and a trio of Iowa miscues gave Nebraska the 25-18 win.

The Cornhuskers wasted no time pushing out to a six-point lead at 12-6 in Set 2. Sweet downed three kills and Foecke added a pair in the run. Iowa pulled within two at 15-13 with help from two Coyle putaways, but that sparked a 10-4 Nebraska run, kicked off by a five-point stretch. Albrecht and Holman notched two kills apiece and Sweet notched two blocks as the Huskers capped the 25-17 victory.

Nebraska took a 10-6 lead in Set 3, only to see Iowa come back to knot the score at 12. Stivrins notched four kills in the early stretch. Janota, Orr and Coyle downed two kills apiece to bring the Hawkeyes level at 12. The teams tied at 13, 14 and 15, before the Huskers pulled away again. A kill and a block by Stivrins and two Iowa errors gave Nebraska an 18-15 advantage. A Coyle kill and Husker miscue made it a one-point game at 18-17, but NU pulled away for good with a final 7-3 run. Kills by Albrecht, Foecke and Hunter and a Maloney ace made it 24-18. A Louis kill and Husker miscue kept the match going, before a service error sealed the sweep.

The Huskers (13-3, 6-0 Big Ten) won their seventh-straight match, and their 6-0 start in Big Ten play is their best since 2011. The victory came against a scrappy Iowa team that was coming off a win over No. 22 Michigan earlier in the week. Iowa fell to 13-6 overall and 2-4 in the Big Ten.

Kelly Hunter set 30 assists and had a team-best 11 digs for her fourth-straight double-double. Kenzie Maloney and Sydney Townsend each added 10 digs.

Set 1: Iowa claimed a 6-4 lead despite a pair of kills and a solo block by Foecke. Sweet pounded a kill and Stivrins and Hunter blocked an Iowa attack to tie the set before Albrecht gave the Huskers their first lead. The Hawkeyes answered and continued to lead 11-9 when Nebraska went on a 4-0 run to go up 13-11. Foecke and Hunter had kills to spark the run, and Holman and Foecke teamed up for a block. Nebraska continued to pull away with an ace by Hunter and kills by Sweet and Holman increasing the lead to 19-13. Albrecht terminated a pair of shots to make it 23-17, and NU won 25-18 on an Iowa attacking error.

Set 2: The Huskers came out hot with kills by Hunter and Foecke boosting them to a 3-0 lead. With a 7-6 lead, Nebraska got three kills from Sweet to set off a 5-0 run that gave them a 12-6 advantage. Iowa cut it to 15-13, but Holman tallied a kill to spark a 5-0 run that put the Big Red up 20-13. Holman and Sweet combined for a block, and Foecke added a kill during the run. The Huskers finished off the 25-17 win on Albrecht’s sixth kill of the match. NU held Iowa to .075 hitting in the set.

Set 3: Stivrins notched four kills to help the Huskers to a 9-5 advantage. Iowa rallied with a 7-3 run to tie the set at 12-12. The Hawkeyes took a 15-14 lead on a kill by Claire Sheehan, but an Iowa attack error tied the set at 15-15. Stivrins and Hunter provided another block to put the Huskers back in front, and Stivrins hammered an overpass after a good serve by Townsend was mishandled. The Hawkeyes then hit wide, and the Huskers led 18-15. Iowa scored the next two points, but Albrecht and Foecke posted kills out of a timeout to gain back the three-point lead, 20-17. After Hunter dumped a kill, Foecke and Holman combined for a stuff block to make it 22-18. Maloney served an ace to gain match point at 24-18, and NU won 25-20 to finish the sweep, its 11th of the season.

Up Next: The Huskers play at No. 7 Wisconsin on Wednesday at 8 p.m.

In front of a program-record 4,729 fans, the University of Iowa volleyball fell, 3-0, to No. 4 Nebraska at Carver-Hawkeye Arena on Saturday night.

FIGHT FOR IOWA
Brie Orr recorded her second double-double of the season with 25 assists and 10 digs. The freshman chipped in five kills as well.

HOW IT HAPPENED
Set 1 (18-25) | With the score tied 11-11 after trading points to open the set, the fourth-ranked Cornhuskers seized momentum and control of the set en route to a 1-0 match lead. Taylor Louis led Iowa with six kills and two blocks.

Set 2 (17-25) | The Cornhuskers jumped out to an early 12-6 advantage. The Hawkeyes responded with a 6-2 run, cutting Nebraska’s lead to 14-12, but the Cornhuskers eventually clinched the set victory. Claire Sheehan and Louis both recorded three kills.

Set 3 (20-25) | Nebraska took an early lead, but back-to-back kills by Reghan Coyle sparked a 6-2 Hawkeye run, knotting the match at 12-12. With the score tied again at 15-15, Nebraska used three consecutive points to take the lead before securing set and the match victory.

HEAR FROM COACH SHYMANSKY
“We are so appreciative of all the Hawkeye fans coming out and supporting us, like true Hawkeyes do, and cheering for us all the way until the end. We blew through the attendance record, and so much effort went into it from our marketing group, the whole staff, the team getting out there. They did a great job promoting us at the football game today and we really appreciate it. We want our Hawkeye fans to be proud of who our women are out there competing and what we’re giving. We want all our fans to come back. We need them because they add to the environment and our intensity.”

“I thought we competed well at the beginning. We had some good intensity, but Nebraska showed why they are No. 4 in the country and at the top of the Big Ten. They are very efficient. We had too many errors and took ourselves out of each set and you could see it. That is part of the climb for us, part of the mission for True Mental Toughness. I love our group and we knew that it would be tough getting through this stretch in the beginning, where we play the top four teams in the first six matches. We came out 2-4 in league play, so we’re not in bad shape, but we need to be in great shape. In order to do that, we need to work harder. We have a short turn around this week. We go to Indiana Wednesday, and that’s a huge match for us. Then we go to Minnesota. We just played them a week ago and now we go to their place. I know that we’re hungry to go out there and compete hard in Bloomington and take a W from the Hoosiers.”

UP NEXT
The Hawkeyes travel to Indiana on Wednesday for their second mid-week matchup. First serve is slated for 7 p.m. (CT).