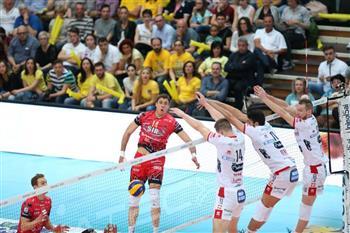 The start of the Italian LegaVolley, the highest branch of men's volleyball in Italy is now less than one week away from the start the 2017-18 season. Current Photo via FIVB

The start of the Italian LegaVolley, the highest branch of men’s volleyball in Italy is now less than one week away from the start the 2017-18 season. Competition for the teams will begin on October 15th following the conclusion of the Italian Men’s Super Cup in which Sir Safety Conad Perugia took the title over Cucine Lube Civitanova in four.

The runners-up from last season, Diatec Trentino, will open play with Revivre Milano. Trentino has some strong talent for this coming season in Nicholas Hoag out of Canada and Filippo Lanza who is a domestic player.

Last season, Milano finished in last place in the league with a 5-21 record. This season they bring in a fairly Italian squad with the addition of Nimir Abdel-Aziz from the Netherlands and Taylor Averill from the United States.

Sir Safety concluded their 2016-17 season in third place but recently showed their worth with a win at the Italian Super Cup this past weekend. Sir Safety will have a strong crew for the coming season including Serbia’s Aleksandar Atanasijevic and the United State’s Aaron Russell who earned the MVP title at the Super Cup.

For Kioene, their roster is primarily Italian players with Dragan Travica leading the team. Coming in from the United States is fresh-out-of-college Lucas Yoder.

Azimut Modena has probably the strongest lineup for the season, with top players from national teams around the world backing up the squad. Bruno Rezende of Brazil and Jennings Franciskovic of the United States will lead the team’s setting efforts while Earvin N’gapeth of France and Max Holt of the United States also come back to the team. Tine Urnaut of Slovenia will also be a huge fixture for the squad.

Grotte will be reinforced with a slew of Italian players along with three Brazilians, Georgios Tzioumakas of Greece and Milosz Hebda of Poland.

Michal Finger of the Czech Republic made his way to Gi Group Monza this season along with Simon Hirsch for Germany. Three Americans will also back up Monza and their seventh-place finish last season in Kawika Shoji, Brett James Walsh and Jake Langlois.

Biosi Indexa Sora will look to build upward from their 13th place finish last season as they are bringing in Alex Duncan-Thibault of Canada and Mitchell Penning from the United States.

Last year’s league champions, Cucine Lube Civitanova will begin their 2017-18 season with Vibo Valentia. Civitanova has added a few strong players this season in Micah Christenson and Taylor Sander from the United States. Additionally, they bring in Serbia’s Dragan Stankovic this season as well. On the other hand, Vibo Valentia has obtained Ben Patch of the United States for the season.

Ravenna will use the strength of Austria’s Paul Buchegger and Cuba’s Miguel Gutierrez this season to help build them up from their ninth-place finish last season. Piacenza finished three spots ahead last season in 6th and brings in a strong Israel player in Tamir Avraham Hershko this season along with Trevor Clevenot.

Top Volley will look to come out strong this season after finishing 11th in the league last year. This season they bring in some outside talent to help them out in Team USA’s libero Erik Shoji and Japan’s Yuki Ishikawa.

Verona ended last season in fifth place with a 16-10 record and they are returning some strong foreign players to their roster. The United States’ Thomas Jaeschke will help Verona this season along with Canada’s Stephen Maar and Iran’s Mohannadjavad Manavinejad.